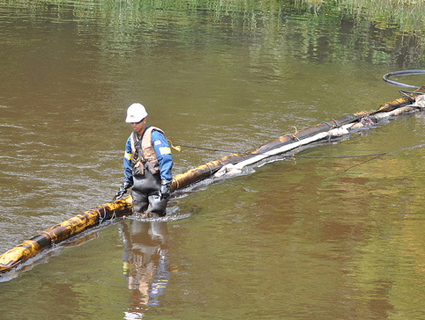 A cleanup crew member at the site of the Kalamazoo River spill in July 2010.<a href="http://www.flickr.com/photos/micstolz/4847871454/in/photostream/">mic stolz</a>/Flickr

This week, as Senate Democrats narrowly defeated a renewed—and some say misguided—call to rush construction of the Keystone XL oil pipeline, residents and officials at the site of the country’s largest-ever tar sands oil spill are still reeling nearly two years after the fact. A look at the fallout from that incident in Michigan reveals that a spill of diluted bitumen, the kind from Alberta’s tar sands that Keystone would carry, is a far nastier beast than your typical spill of conventional crude. It also shows that cleaning it up can be just as damaging to the environment as the spill itself.

A story this week in the Canadian online magazine The Tyee outlines how, 20 months after a pipe carrying tar sands “dil-bit” burst on the Kalamazoo River near Marshall, residents and local Environmental Protection Agency officials are still struggling to clean up the river. It was the first-ever major spill of this type of heavy oil, and it blindsided EPA cleanup crews: recovering the 1.2 million gallons of oil that have been cleaned up so far has cost the pipe’s owner, Enbridge Energy Partners, roughly $725 million—10 times as much, per liter, as the average spill of conventional crude. Ralph Dollhopf, who led the EPA’s response to the incident, told local media that the agency had to “write the book” on dealing with a cleanup of tar sands bitumen.

The underlying issue, Natural Resources Defense Council attorney Anthony Swift told me, is that US and Canadian officials don’t know just how different dil-bit is from conventional crude. With US imports of tar sands bitumen projected to shoot up to 1.5 million barrels per day by 2019 (up from 100,000 barrels in all of 2000), Swift said there remains a serious deficit in US and Canadian officials’ understanding of how to manage potential spills. “The pipeline safety issue is just one of many areas where tar sands production hasn’t been fully evaluated,” he said. That didn’t deter Alberta Premier Alison M. Redford from telling reporters she was “very optimistic” that the Keystone pipeline, which would likely be an economic windfall for her province, would be approved by the Obama administration should the president win reelection.

When conventional crude is spilled into water, it floats on the surface, making the cleanup process a relatively simple matter of skimming and scooping (you might recall images of this from the Deepwater Horizon spill). But bitumen is thick and heavy, and has to be diluted with a noxious chemical cocktail so it can flow in the pipe. When spilled, the dilutant evaporates into the nearby atmosphere; Marshall residents reported nausea, migraines, and burning in the eyes and throat. Meanwhile, the bitumen separates from the dilutant and sinks to the bottom.

“We want to make sure the cure is not worse than the disease.”

“If you’re a clam or a turtle, that’s no good,” Michigan State ecology professor Steve Hamilton said. Hamilton works at a field station near the spill site. He’s concerned that the cleanup, which involves “agitating” the riverbed (at least 200 acres of which were contaminated) to bring oil globules to the surface for collection, could be just as damaging as the toxic nature of the bitumen itself. “We want to make sure the cure is not worse than the disease,” he said. Now, the cleanup crew is trying to decide whether they’ve reached a point of diminishing returns: some oil may be left behind for the sake of no longer disturbing the area.

Still, the local ecosystem was lucky, Hamilton said, because the actual spill took place in a nearby marsh, which weeded out some of the worst contamination before the oil reached the river proper. Had the spill happened in a more open body of water—such as the Ogallala Aquifer in Nebraska, through which the Keystone pipeline was originally destined to pass—things could have been much worse. “We’ve got to make the pipeline system more safe,” Hamilton said. The Kalamazoo spill “clearly shows the need for tight regulation of this industry.”

Representatives from Enbridge, the burst pipe’s owner, did not return calls for comment, but said in a statement on their website: “Enbridge has always been safety and environmentally conscious and this incident has provided learnings in many different areas of our company, including pipeline inspections and preventive maintenance, public awareness, and communications with emergency responders and the community.”

Back in December, Congress called on pipeline regulatory agencies to examine whether new regulations will be needed for pipes carrying diluted bitumen, Swift said, but the future of dil-bit pipelines remains as cloudy as the shaken-up bottom of the Kalamazoo River. “Kalamazoo really points to the danger of moving forward with these projects without understanding the risks,” he said. “The last thing you want is to find out you have a problem after the disaster has happened.”