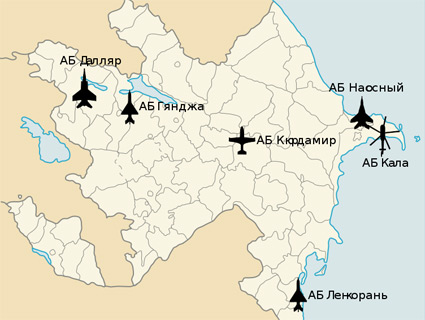 Senior US intelligence officials say that the Israeli military has recently gained access to airbases in the Republic of Azerbaijan, an independent Turkic state on Iran’s northern border.

Foreign Policy‘s Mark Perry, who broke the story, explains what it means for the Israeli-Iranian standoff:

[A]ccording to several high-level sources I’ve spoken with inside the U.S. government, Obama administration officials now believe that the “submerged” aspect of the Israeli-Azerbaijani alliance—the security cooperation between the two countries—is heightening the risks of an Israeli strike on Iran…[F]our senior diplomats and military intelligence officers say that the United States has concluded that Israel has recently been granted access to airbases on Iran’s northern border. To do what, exactly, is not clear. “The Israelis have bought an airfield,” a senior administration official told me in early February, “and the airfield is called Azerbaijan.”

Senior U.S. intelligence officials are increasingly concerned that Israel’s military expansion into Azerbaijan complicates U.S. efforts to dampen Israeli-Iranian tensions, according to the sources. Military planners…must now plan not only for a war scenario that includes the Persian Gulf—but one that could include the Caucasus.

It is precisely what is not known about the relationship that keeps U.S. military planners up at night. One former CIA analyst doubted that Israel will launch an attack from Azerbaijan, describing it as “just too chancy, politically.” However, he didn’t rule out Israel’s use of Azeri airfields to mount what he calls “follow-on or recovery operations.” He then added: “Of course, if they do that, it widens the conflict, and complicates it. It’s extremely dangerous.”

In case you’re curious, here’s what an airbase in Azerbaijan looks like:

The Azerbaijani government flat-out denied the FP report on Thursday. Teymur Abdullayev, a spokesman for the country’s defense ministry, called the allegations “absurd and groundless,” and another senior official in Baku, the Azerbaijani capital, vowed that “there will be no actions against Iran…from the territory of Azerbaijan.”

Despite Baku’s denials, this story will undoubtedly damage the already fraught relationship between Azerbaijan and its neighbor to the south. The Iranian government openly disapproves of Azerbaijan’s friendly relations with Israel—the two countries’ partnership includes over a billion dollars worth of arms shipments to Azerbaijan from the Jewish state—and Iranian authorities have repeatedly accused Azerbaijan of colluding with Israeli spies and assassins. Police in Azerbaijan this month arrested 22 terror suspects who were supposedly receiving marching orders from the Iranian Revolutionary Guards.

Meanwhile, Anshel Pfeffer at Haaretz doesn’t buy the speculation of an Israeli airstrike being launched out of an Azeri airbase:

[A] cursory glance at a map hardly bears it out. A range of American military experts claim that Azeri airfields would be invaluable for Israel as it would solve some of the fuel/range issues of a 2000+ km strike, they fail to address the problem of where the Israeli warplanes can fly to once they have refueled in Azerbaijan. There is no friendly route to fly back to Israel, except over Iranian or Turkish territory, hardly appealing alternatives once an attack has already been carried out and both countries will be on highest alert…Other uses proposed in the FP feature, using Azeri fields just in the case of emergency landings or using them to base search-and-rescue helicopters or reconnaissance drones, makes more sense.