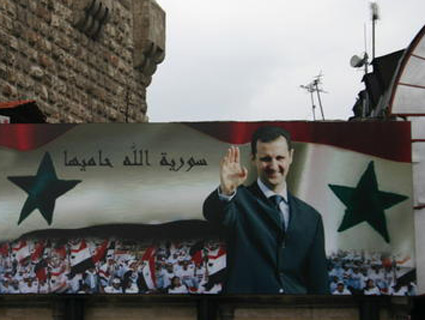 The Obama administration and key allies are further mapping out potential military options for intervention in Syria, in the event that diplomatic efforts fail to stem the carnage. In the past month, the United States has also been flying surveillance drones over the Middle Eastern nation, and has extensively reviewed the viability of different military alternatives—even as any large-scale US military operation seems increasingly unlikely.

[Options] include directly arming opposition forces, sending troops to guard a humanitarian corridor or “safe zone” for the rebels, or an air assault on Syrian air defenses, according to officials from the United States and other nations opposed to Syrian President Bashar al-Assad.

But the governments remain deeply divided over the scope of any intervention, how and when it would happen, and who would participate…There is [however] widespread agreement that the threat to regional and international stability increases with each day that passes, as more civilians are killed in ever-more brutal ways, with no progress toward a peaceful transition.

(For the record, regional players Turkey, Qatar, and Tunisia have all recently called for some form of military intervention in Syria.)

Last week, Marine Gen. James Mattis, commander of US Central Command, said during testimony before the Senate Armed Services Committee that hastening the fall of Assad would be “the biggest strategic setback for Iran in 25 years.” (Though he stopped short of endorsing military action.) Mattis asserted that with the removal of the regime, Iran’s “link to Lebanese Hezbollah will be cut if Bashar Assad goes,” and that “providing arms” to democratic opposition forces “is perhaps an option.”

Viewing the de facto civil war in Syria as something of a proxy conflict involving Iran isn’t a particularly novel idea: The government in Tehran is Assad’s last unconditional ally in the region. President Obama has mentioned that Assad being “on the ropes” puts immense pressure on the Iranians. It’s also worth noting that Saudi Arabia—which has for months condemned the crackdown, and supports the arming of rebel fighters—sees the conflict in Syria as a means of combating Iranian influence in the Middle East. Brian Whitaker of The Guardian breaks down the regional and sectarian power plays:

Saudi Arabia has nothing to teach Syria about democracy, and protest demonstrations in the kingdom are totally banned…Saudi Arabia has no interest in promoting democracy or human rights in Syria; it does have an interest in promoting Sunni Muslim influence and combating Shia influence (as embodied at the international level by Iran). Considering the Assad regime’s ties with Iran, this suggests a motive for Saudi Arabia to become involved…in the hope of driving a wedge between Iran and a post-Assad Syria.