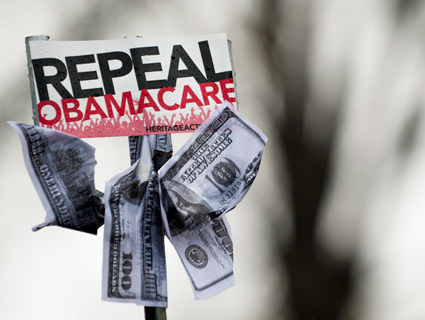 The Supreme Court will hear oral arguments concerning the constitutionality of Obamacare—a.k.a. the Affordable Care Act, or ACA—beginning Monday. (Last week, Obama reelection campaign manager Jim Messina sent out an email to supporters noting that he and the campaign are proud of “Obamacare,” thus claiming the term from their foes.) What will the justices decide? Here are a few of the probable scenarios:

The Supreme Court punts. The first day of oral arguments is devoted to whether or not the Tax Anti-Injunction Act, a law that bars legal challenges to taxes before anyone actually pays them, applies to the individual mandate—the Obamacare provision that levies a tax on individuals who don’t purchase health insurance and are not otherwise covered by an employer or government program. By taking this road and embracing an argument first laid out by Judge Brett Kavanaugh, a George W. Bush appointee, the Supreme Court could avoid dealing with the constitutionality of the individual mandate until after the 2012 election. Doing this could make the mandate ultimately more likely to be upheld, because the high court would be acknowledging that the mandate is a tax and falls under the federal government’s constitutional authority to levy taxes.

“This might end with a whimper rather than a bang,” says Adam Winkler, a law professor at the University of California–Los Angeles. “If the court rules that the Tax Anti-Injunction Act applies, then all of the hullabaloo will be for naught.”

The Supreme Court tosses out the whole law. Conservative opponents of the ACA argue that the individual mandate—only one provision of the law, albeit a central one—is an unconstitutional assertion of federal power, and they insist it ought to be struck down. But they also want to see the whole law ruled unconstitutional. Aside from the individual mandate, conservatives are also challenging the constitutionality of expanding Medicaid to 16 million more Americans. By the White House’s numbers, that’s about half of the Americans who will ultimately get coverage under the ACA. In his brief, former Solicitor General Paul Clement, who will be arguing for the ACA’s challengers before the court, suggested that if either the individual mandate or the Medicaid expansion are ruled unconstitutional then the entire law should go. As TPM’s Brian Beutler points out, it doesn’t help that Congress didn’t include in the original bill a “severability” clause (a traditional legislative provision that essentially says that if a portion of a law is struck down, the rest of the legislation still stands). This makes it easier for opponents to argue the entire law should be scrapped.

If the court doesn’t rule on the individual mandate, however, that still leaves the question of whether the ACA’s Medicaid expansion is constitutional. But experts speculate the court is unlikely to leave the mandate alone but overturn the health care law based on the Medicaid expansion.

The Supreme Court tosses the mandate and the ban on discrimination on the basis of preexisting conditions. The ban on insurance companies refusing to cover individuals on the basis of preexisting conditions is arguably the most popular part of the Affordable Care Act. Nevertheless, the Obama administration has argued that if the high court should choose to strike down the individual mandate, the whole bill wouldn’t have to go. But, the government also notes, the prohibition on insurance companies discriminating on the basis of preexisting conditions would have to be dumped, because without the mandate the law’s other provisions would “create a spiral of higher costs,” with individuals getting sick and enrolling at the last minute. “The federal government’s position is that [if] the mandate goes, other important things go too,” says Doug Kendall of the Constitutional Accountability Center.

The Supreme Court strikes down the individual mandate and keeps everything else. Neither the conservative challengers to the law nor the Obama administration would be particularly happy with this outcome. It would leave the current law mostly intact. But it would also, administration officials fear, bankrupt the insurance companies still forced to provide coverage without the necessary financial resources to do so. (Without a mandate, the insurance industry will have fewer customers and less resources to handle an influx of those people with preexisting conditions.) However, during the five and a half hours of oral arguments, the high court will also be hearing from H. Bartow Farr III, who will be arguing for the 11th Circuit Court of Appeals’ position that the court doesn’t have to strike down anything other than the individual mandate, if the court finds it unconstitutional.

The Supreme Court upholds the entire law. In the post-Bush v. Gore era, where the justices’ opinions often seem to reflect little more than the ideological positions of the parties that appoint them, it seems difficult to imagine that the Affordable Care Act fully survives. But it could happen. George Washington University Law School Professor Orin Kerr, a former clerk for Justice Anthony Kennedy, is pretty bullish on the ACA’s chances. Last August, he predicted that “the mandate will be upheld by a vote of anywhere from 6-3 to 8-1.”

Something crazy happens. The above scenarios seem like the most likely outcomes. But this is a historic case, and it’s possible that the court could fail to find consensus one way or the other, leading to the justices splitting in a way that no position ends up with a clear majority. It’s unlikely, but anything could happen.