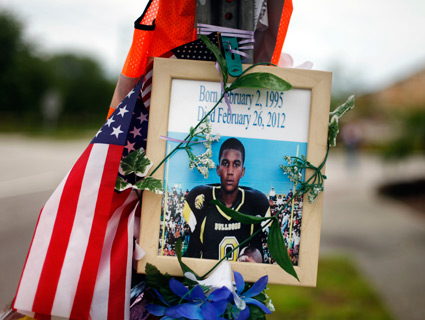 In some sense, it’s history you could recount from many places in America: It could be Miami, where Trayvon Martin came up, and where rioters scorched the streets in the 1980s over black motorists killed by police. It could be Prince Edward County, Virginia, near where George Zimmerman grew up, and where the county board of supervisors once abolished public education rather than comply with integration. Or it could be southern Wisconsin, where not long ago a noose and racial threats turned up on a college campus, and where earlier this month another gun owner killed a black man allegedly in self-defense.

But when it comes to a history of fear, racism, and violence, Sanford, Florida, has a particularly fraught past, one that traces right up to the night a month ago when an unarmed black kid was shot dead on one of its streets, and his killer went free.

In 2010, the son of a Sanford cop assaulted a homeless black man, and officers on the scene let him go free.

Long before the live oaks and Spanish moss gave way to interstate highways and box stores, Sanford began as a citrus town in the 1870s, conceived by a New England tycoon. Henry Shelton Sanford, who had ingratiated himself to Abraham Lincoln and served as Lincoln’s ambassador to Belgium for eight years, had the town built by Swedish laborers. Though the citrus empire he dreamed of didn’t exactly flourish, Sanford proved instrumental to promoting trade with the Belgian-controlled territory of Congo—which included his vision of promoting Congo as a place to ship America’s freed blacks. The African locale, he said, represented an outlet “for the enterprise and ambition of our colored people in more congenial fields than politics.” A Congo peopled with African Americans could be “the ground to draw the gathering electricity from that black cloud spreading over the Southern states.”

Read our explainer and latest updates on the Trayvon Martin killing.

That sense of alienation hung in the air for decades. Then Jackie Robinson entered the picture. Before he broke Major League Baseball’s race barrier in 1947, Robinson played for a Dodgers farm team in Sanford—but only briefly. His presence in spring training that year so incensed white residents that they accosted the mayor and demanded Robinson’s ouster. When the integrated team was physically prevented from taking the field, the Dodgers’ owner moved Robinson out of town for his own good. “The Robinsons were run out of Sanford, Florida, with threats of violence,” Robinson’s daughter would later say.

Soon after, the Dodgers also left town, but the bitter feelings remained. Change came excruciatingly slow to Sanford. This was a community that held on to an archaic law ordering police “to shoot all pigeons on sight” until 1989, according to a St. Petersburg Times news capsule. “Over the years Sanford dug in its feet against change,” a local newspaper editor told the New York Times in 1990. “It resisted integration, filling in the public pools rather than integrating them.”

“The trust that may have existed is gone,” said Sanford’s African American city manager.

It may come as no surprise, then, that law and order in Sanford in recent years has been plagued by allegations of racial injustice, and a series of public missteps involving its police department. In 2006 two private security guards—one the son of a Sanford police officer, the other a volunteer for the department—killed a black teen with a gunshot in his back. Even though they admitted to never identifying themselves, the guards were released without charges. Then, in 2010, Justin Collison, the son of a Sanford PD lieutenant, sucker-punched a homeless black man outside a bar, and officers on the scene released Collison without charges. He eventually surrendered after video of the incident materialized online; the police chief at the time was ultimately forced into retirement. “Bottom line, we didn’t do our job that night,” a police department representative told local news station WFTV of the incident.

As it would turn out, the Sanford patrol sergeant in charge on the night of Collison’s assault, Anthony Raimondo, would also be the first supervisor on the scene of Trayvon Martin’s shooting death.

“There is no trust, there is no confidence,” between African Americans and Sanford authorities, said local NAACP leader Turner Clayton. “It’s at an all-time low.” Even embattled city manager Norton Bonaparte—who oversees Sanford’s police department and is African American—acknowledges this truth. “The trust that may have existed is gone,” he said, “so we have to start from ground zero.”

Or perhaps it was never really there: Reverend Harry Rucker, pastor of Sanford’s First Shiloh Missionary Baptist Church, told crowds in the 1990s that integration was a mistake, and that anger was the best way to confront racism. “The worst thing that happened to us when they changed our schools [through desegregation], there went our leaders, there went our teachers,” he said then. “We never asked for integration. We asked for equality.” Rucker is still at First Shiloh today; he has been one of the organizers of the town’s rallies for Trayvon Martin.

In those rallies, and in demonstrations around the country in recent days, Americans have been saying “We are Trayvon Martin.” In some ways, Sanford’s history is all of ours, as well—to be acknowledged, and hopefully to be left behind once and for all.

[For videos, documents, and all the latest updates on the Trayvon Martin case, read our comprehensive explainer.]