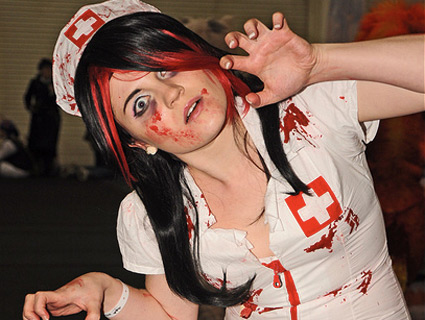 The first question before the Supreme Court on Wednesday, the last of three days of oral argument about the constitutionality of President Barack Obama’s health care law, was whether the individual mandate—the requirement that certain uncovered Americans purchase health insurance or pay a fine—was the “heart” of Obamacare. In other words, if that beating heart is ripped out by a majority of the nine black-robed justices, should the Affordable Care Act be allowed to stumble along or be put down with a double-barrel shot to the head?

Former Solicitor General Paul Clement, representing 26 states challenging the law, said that without the individual mandate the rest of the bill would not work and Zobamacare should not be allowed to rise from the remains.

See our full coverage of the Supreme Court’s Obamacare hearings.

“What you end up with at the end of that process is just sort of a hollow shell,” Clement said. “You can’t possibly think that Congress would have passed that hollow shell without the heart of the Act.” Justice Antonin Scalia later asked Deputy Solicitor General Edwin Kneedler that particular question: “Can you take out the heart of the act and leave everything else in place?”

Kneedler had a tough position to defend. The Obama administration’s stance is that if the individual mandate is struck down, popular provisions like the ban on insurance companies discriminating due to preexisting conditions must also go. Kneedler was telling the court that if a majority chooses to rip out the heart of the bill, they will have to tear out the entire circulatory system, too. The reason: Without the individual mandate to push healthy individuals to buy insurance, the insurance industry would go bankrupt trying to cover those with serious, expensive health problems. Yet Kneedler also argued that the Affordable Care Act created a “sharp dividing line” between those popular reforms and the rest of the law. The legal concept in play here is “severability”: whether or not the law can remain if one piece is stricken.

The administration’s argument was essentially a plea to protect the health insurance industry should the mandate fall. Both Democratic– and Republican– appointed justices seemed sympathetic to that argument. For the Republican-appointed justices, this would make it easier to overturn the entire Affordable Care Act. When Attorney H. Bartow Farr III—who the court designated to defend an appeals court ruling that neither the government nor the states embraced—stood up to argue that the law would still largely function as intended without the mandate, Justice Sonya Sotomayor worried aloud about an impending “death spiral.” Likewise, Justice Anthony Kennedy, considered the swing vote on the court, suggested that it would be judicial overreach if “one provision was stricken and the others remained to impose a risk on insurance companies that Congress had never intended.”

Despite all the focus on the individual mandate and whether it could be severed from the rest of the law, the constitutionality of the law’s Medicaid expansion, which was also considered Wednesday, could have a more dramatic impact on Americans’ health care. That expansion will lead to 16 million more Americans being covered, about half of the entire number of people who would receive coverage under the Affordable Care Act. (Medicaid offers federal money to states to help provide health care to the poor and elderly—the program is technically optional, but all states participate. Under Obamacare, the states have to accept the expansion or opt-out of the program.) Clement contended that this expansion should be struck down because the states would never refuse the money, and therefore this provision was unconstitutionally coercive.

“The chances for an adverse ruling [on the Medicaid measure] are lower but the stakes are higher,” says Doug Kendall of the Constitution Accountability Center. “The stakes are higher because if the court does find coercion in this expansion of Medicaid, than a lot of other previous and future expansions of Medicaid are at risk.”

The Democratic appointees on the court were pointedly unconvinced by Clement’s argument. “It’s just a boatload of federal money for you to take and spend on poor people’s healthcare,” Justice Elena Kagan said. “It doesn’t sound coercive to me, I have to tell you.” Justice Ruth Bader Ginsburg pointed out that the court had never struck down a state-federal partnership program “because it was so good that it becomes coercive to be in it.” Justice Sonya Sotomayor said that the main element of “coercion” here appeared to be politicians not wanting to face voters after declining Medicaid funding.

Clement’s argument, however, received a favorable reception among the court’s conservative wing. Scalia likened the expansion to “an offer they can’t refuse,” while Kennedy said there’s “no real choice.” Chief Justice John Roberts asked sharp questions of the attorneys on both sides. Not only is Obamacare in danger of being struck down—and 16 million uninsured Americans losing coverage the law would provide them through Medicaid—the legal basis for the federal government providing insurance to the poor and elderly is in the crosshairs.

Conservatives came to the court hoping to strike the individual mandate. It now appears entirely possible that they will kill the mandate, the law itself, and fundamentally curtail the federal government’s ability to control how states use its money. This would be like asking for a pony for Christmas and actually getting it.

In the final moments, the arguments returned to first principles. Solicitor General Donald B. Verrilli, in an attempt to recover from his halting performance Tuesday, urged the court in his final remarks to consider the consequences of destroying the Affordable Care Act outright.

“There will be millions of people with chronic conditions like diabetes and heart disease, and as a result of the health care that they will get, they will be unshackled from the disabilities that those diseases put on them and have the opportunity to enjoy the blessings of liberty,” Verrilli said. But that may not be the kind of liberty members of this court consider important. Clement shot back that “It’s a very funny conception of liberty that forces somebody to purchase an insurance policy whether they want it or not.”

So the arguments ended where they started: Whether the greater deprivation of liberty is dying for lack of affordable care, or being taxed into buying health insurance. For those Americans struggling to pay their medical bills, Zombie Obamacare could be better than nothing.