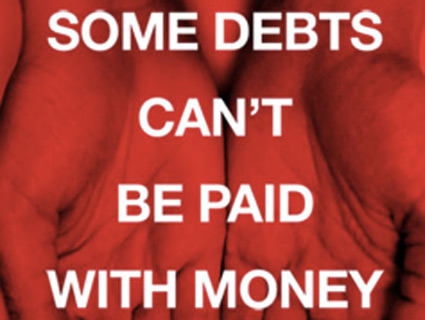 Payback: Debt and the Shadow Side of Wealth
Zeitgeist Films
82 minutes

Jennifer Baichwal’s new documentary, Payback: Debt and the Shadow Side of Wealth, is all about debt, but it won’t help you consolidate credit card payments or pay off student loans. The film is an adaptation of Margaret Atwood’s book-length essay of the same name, which is itself an adaption of a series of lectures.

Atwood focused on rethinking the concept of debt, meandering through classic stories from the Orestes to Michael Corleone, accumulating trivia along the way. Ancient Aramaic uses the same word for both debt and sin; when Genghis Khan ransacked cities, he spared the scribes so they could track of the empire’s debits and credits; an old Welsh custom allowed the poor to “eat the sin” of the recently deceased, taking on spiritual liabilities in exchange for food or cash. Stockpiling these anecdotes is not unpleasant, but it is slow going.

Baichwal’s film is more entertaining. Atwood makes several appearances reading from her work, but instead of floating freely, the writer’s ideas are anchored to actual people, and used to frame four stories of debt and payback. None of them are purely financial.

First come two Albanian families locked in a blood feud. One man moved a fence, the other hit a pregnant woman who defended the new fence, the first man shot the second man as revenge. The man survived, but the shooter’s punishment is that he and his family can never leave their home—if they do, the other family can kill them. Imprisoned in their home for seven years, the debtor family has nothing to do but hang around their house bony and hopeless while their father plays a guitar and wails songs about forgiveness. The “creditor” has a leather jacket and constant sneer. His vindictive delight makes the punishment seem too harsh, even when he shows his gunshot scars. Whenever he appears you have to suppress the urge to shout at the screen, “Get over it already!”

The setting is just foreign enough that it would be easy to feel smug, but the film quickly reminds us that our penal system is uncomfortably similar. Another storyline follows Paul, a man trapped in a cycle of drug abuse, stealing, and prison. He’s burly and tattooed and repentant, crying as he reads a statement from a woman whose house he broke into about how she doesn’t feel safe. He’s knows he’s not innocent, “but this,” he says, referring to his prison life, in which he seems to do nothing but work out and reproach himself “is not paying back.”

It’s hard to make a movie that works like an essay. Essays gather evidence and reflection in the hope of creating a new understanding of a thorny issue. That’s a solitary process, and a pretty boring one to watch. We have reality shows that follow all kinds of pursuits, not just singing and crab fishing, but ad pitching and real estate sales. We will never have America’s Next Top Essay, though, because who wants to sit on the couch and watch someone else think through a complicated idea? Baichwal makes it work. Like any good essay, this documentary asks hard questions, teaches the audience a little history, brings in some experts, and tells a few good yarns.

The best debt stories in Payback are those of the Deepwater Horizon oil catastrophe and the Imokalee tomato pickers. The workers pick fast, running down rows of plants and throwing full buckets of tomatoes up into trucks that drive alongside them. It looks hard—even harder than you think tomato picking would be. It’s hot. Some people faint. Nobody makes a living wage. Then flash to the 1998 congressional hearing where Eric Schlosser argues against the Florida Tomato Growers Exchange’s assertion that it would be “un-American” for fast food vendors to pay an extra penny per pound of tomatoes to compensate the pickers more fairly. Some debts are heavy, but hard to see. “[Tomatoes] appear cheap in supermarkets,” says author and activist Raj Patel “so we don’t see that we owe a debt to these workers.”

Other debts are breathtakingly visible. Footage of dark, iridescent oil skimming the Gulf of Mexico; coastal birds blinking through coats of brown sludge and toxic petro-nuggets washing up on shore are all reminders of the magnitude of the BP disaster. Experts estimate the value of the ecosystem services provided by a healthy Gulf at between $34 billion and $670 billion; at $20 billion, BP’s environmental mitigation fund is a bargain. Maybe no amount of money can set it right. As a flinty fisherman mourns the loss of a generations-old family business, you think that hey, maybe those Albanians were onto something. Maybe BP’s executives need to be locked up in their own grimy little house for a couple of decades, with nothing to do but sing wistful songs about reconciliation until they learn their lesson.

Ultimately, Payback isn’t an argument in favor of being more forgiving or demanding of the debts we’re owed. Atwood and Baichwal’s point is that debt—and its close relatives fairness and revenge—govern far more than money. We need to keep better track of the debits and credits that will never show up in an account statement. “Debt is part of this elaborate imaginative construct that is human society,” Atwood says, standing sage-like in flowing sweaters before a rapt audience, “how we think about it changes how it works.”

Payback is in limited release this spring.