To hear Mitt Romney tell it, President Barack Obama’s three years at Harvard Law School helped turn him into an aloof, big-government-loving radical. “We have a president, who I think is a nice guy, but he spent too much time at Harvard, perhaps,” Romney told an audience in Pennsylvania in April. But if the de facto GOP presidential nominee wants to make educational experiences a focal point of his candidacy, he could be playing with fire.

In an interview with an Iowa radio station five years ago, the former Massachusetts governor acknowledged the influence of a controversial figure from his own schoolboy past—W. Cleon Skousen, the late Mormon historian and tea party hero who taught Romney at Brigham Young University. A former FBI agent, Salt Lake City police chief, and professional conspiracy theorist, Skousen fashioned a narrative of American history that held a unique appeal to religious conservatives—all based on the notion that the Founding Fathers were members of a lost tribe of Israel. His work also sparked a fierce backlash over racist passages and baseless, bordering on conspiratorial, assertions that prompted the Mormon church to take steps to quash his influence. 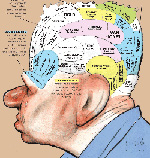 Romney’s embrace of Skousen came in an August 2007 interview appearance with Iowa talk radio host Jan Mickelson, a conservative talker Politico‘s Jonathan Martin calls “the Rush Limbaugh of Des Moines.” The appearance grabbed headlines at the time due to Mickelson’s goading questions on Mormonism, which caused Romney to lose his cool early on and abandon it altogether shortly after that. But it was Romney’s comments about Skousen that were most revealing.

“You and I have a common affection for the late Cleon Skousen,” Mickelson started. Romney, who appeared to be bracing from a confrontation from the beginning, nodded in affirmation: “Mmm, yeah.” Mickelson pressed on, alluding to a previous conversation the two had, in which Romney had mentioned that he had studied under Skousen while in college at Brigham Young. “Exactly,” Romney said.

When Mickelson brought up Skousen’s most famous work, a civics textbook called The Making of America, Romney professed ignorance. “Isn’t that something,” Romney said. “That I have not read.” But, he added, if it was about what Mickelson said it was—the original intent of the Founding Fathers—”that’s worth reading.”

The exchange was read by some liberal critics an enthusiastic endorsement of Skousen by Romney. In the context, he’s merely suggesting, with characteristic blandness, that anything to do with the Founding Fathers is worth reading. In fact, he went on to reject the notion that state governments could simply ignore a Supreme Court decision they considered to be wrongly decided—a staple of Skousen’s 10th-Amendment-based philosophy of nullification. “You flunked the Skousen test!” Mickelson tells him. “I’m sorry to flunk the Cleon Skousen test,” Romney says, a hint of annoyance in his voice. “I’m not familiar with it.”

But Romney did recommend a Skousen book later in the discussion, when the subject turned to Mormon eschatology. “Cleon Skousen has a book called The Thousand Years,” Romney told Mickelson. The Thousand Years is actually a trilogy that details the 4,000 years that elapsed between the creation of the earth and the birth of Christ. The book, Romney said, could set Mickelson straight on what he actually believes. “It’s throughout the Bible. Christ appears in Jerusalem, splits the Mount of Olives to stop the war that’s coming in to kill all the Jews…That’s when the coming and glory of Christ occurs.” 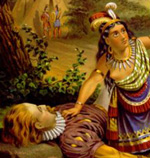 If Romney hasn’t read Skousen’s political philosophy, that’s probably for the best. His professor’s grand theory of American history was founded on a set of beliefs that had little to no basis in reality. He believed that the Founding Fathers were directly direct descendants of the Lost Tribes of Israel, whom he said had migrated to the British Isles—and that by extension, the Constitution was the direct descendant of the ruling system of the ancient Israelites. In Making of America, the textbook that Mickelson referenced in his conversation with Romney, Skousen quotes from an essay which argues that “one of the blessings of slavery” was that slaves’ marriages were fleeting, and suggests that being bought at auction improved slaves’ self worth. The real victims of slavery, the author suggested, were the white owners. The book also referred to black children as “pickaninnies”—which prompted lawmakers in California to block the text from being used in classrooms. In Skousen’s book, the model Supreme Court decision was Dred Scott, which correctly demarcated the limits of federal power; Roger B. Taney, who wrote the majority opinion in that case, was the model Supreme Court justice.

Although he didn’t seem familiar with Making of America, Romney was almost certainly aware of his ex-professor’s reputation. Skousen’s academic colleagues began to push back against his teachings while Romney was still a student at BYU. As Alexander Zaitchik reported for Salon, some of Skousen’s colleagues at BYU insisted on teaching his economic treatise, Naked Capitalism, which theorized that a global cabal of bankers was quietly controlling the world from behind the scenes. (Naked Capitalism was a sequel to Naked Communism, which argued that the Soviet Union was just a pawn in larger effort by the United Nations to control the world).

Skousen’s crackpot theories eventually drew the attention of the leaders of the Mormon church, who were determined to distance themselves from Skousen’s sermonizing. The church, Zaitchik reported, issued a formal order instructing clergy not to promote Skousen’s work (he had started an anti-Communist civics group called the Freeman Institute) from the pulpit, lest anyone get the wrong impression about the church’s beliefs. Romney, a former Mormon bishop, would have had to have been living under a rock not to know about Skousen’s conspiratorial reputation.

After his heyday in the 1980s, Skousen faded into irrelevance, only to be resurrected at the dawn of the tea party era. Glenn Beck, who called Skousen’s Five Thousand Year Leap “years ahead of its time,” made its ideas the centerpiece of his 9/12 movement and wrote the foreword to a new edition of the book. Texas Gov. Rick Perry said that Skousen “shares his views” on the founding of the country and touted him in speeches to evangelical audiences. Constitutional seminars based on Skousen’s theories of an Anglo-Saxon chosen people popped up across the country.

Everyone experiments a little bit in college. But conservatives have attempted to turn Obama’s undergraduate and law school record into a wedge issue. Fox News touted Obama’s public embrace of a respected civil rights attorney and law school professor as evidence of unspoken extremist views; Romney surrogate Donald Trump publicly questioned whether Obama was a beneficiary of affirmative action; Romney, owner of two Harvard degrees, hammers the president for holding one. Even the candidate’s son, Tagg, got in on the action, joking last fall that his dad would release his tax returns when Obama released his transcript from Columbia University (and his birth certificate). Democrats have thus far been reluctant to return the favor with Romney—but Skousen is a reminder that two can play that game.