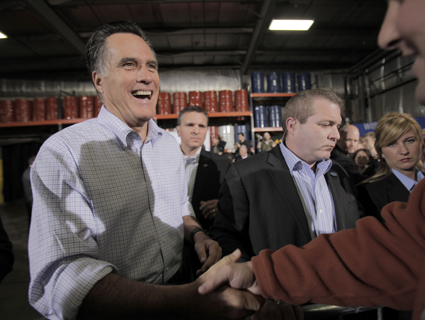 In the last four years, the National Rifle Association has accused President Barack Obama of plotting to ban handguns, quintuple the price of ammunition, eliminate the entire legal construct of “self defense,” and working with the United Nations to do everything short of taking Charlton Heston’s Glock from his cold dead hands—although surely that will come in due time. Few organizations have done as much of the nation’s leading gun lobby to gin up right-wing fears about the President’s secret motives—a sinister agenda that could end, NRA president Wayne LaPierre warned in February, with the end of freedom and the collapse of America as we know it.

Their reward: A meeting on Friday with the man who just might be the next President. For the NRA, Mitt Romney’s speech at their annual convention in St. Louis (alongside luminaries like Ted “suck on my machine gun” Nugent) was continued validation of their privileged status in national politics; for Romney, it was a reminder of just how far he’s willing to go prove to conservatives he’s one of them. Even if it means speaking to a group whose recent rhetoric would make the Birchers blush.

It is an awkward marriage. The NRA convention is not an especially friendly venue for a man who famously admitted to hunting “small varmints.” Although he recently confessed to owning two shotguns, Romney has done little to suggest he really knows what to do with them. When asked, at a debate in January, to identify the last time he’d gone hunting, he cracked, “I’m not going to describe all of my great exploits,” before briefly confusing elk with moose. He addressed the group by video in 2011, and only became an NRA member in 2006, when it became clear that he was going to run for president.

But Romney’s appearance on Friday was about much more than hunting. In making his pitch in St. Louis, he cozied up to a group that has capitalized on fears of a dictatorial power grab to push through legislation like Florida’s “Stand Your Ground Law,” the statute made famous by George Zimmerman which gives gun-owners the right to shoot someone in self-defense outside their home without making any effort to otherwise removes themselves from the situation.

In 2008, the NRA sent out a mailing outlining what it called “Obama’s Ten Point Plan to ‘Change’ the Second Amendment.” Although “Change” was in quotes, Obama had never actually suggested changing the Second Amendment. But that was the least of the mailing’s errors. Among the 10 steps: “close down 90 percent of the gun shops in America”; “increase federal taxes on guns and ammunition by 500 percent”; “ban use of firearms for home defense”; “ban the manufacture, sale and possession of handguns”; “Restore voting rights for five million criminals.”

None of these were part of the Obama platform. None of them have since been acted on. But none of that really matters to the NRA, which uses out-there arguments to make money and shift the conversation.

Last summer, even after the Gabrielle Giffords shooting in Tuscon had come and gone without any movement on the gun control front—and despite a number of small measures to actually loosen federal restrictions on gun ownership—LaPierre resurrected another classic right-wing conspiracy. LaPierre, author of The Global War on Your Guns: Inside the UN Plan to Destroy the Bill of Rights, began fundraising off of fears of something called the “United Nations Small Arms Treaty“—an almost-finished compact that would allow the international body to confiscate handguns from law-abiding Americans, and force gun owners to sign up for an international gun registry. One problem: There’s no such thing as the UN Small Arms Treaty. There is a proposed weapons treaty, designed to cut down on illicit arms dealing, which has yet to be drafted and which the US had taken steps to ensure won’t interfere with Second Amendment rights (even if it did, the Senate would simply block it).

Now that his 2008 fears of imminent gun confiscations haven’t been realized, LaPierre has a new line: It’s a trap! Obama’s support for pro-gun legislation is actually a trick to lure gun owners into a false sense of security, and then, Pow! “It’s all part of a massive Obama conspiracy to deceive voters and destroy the Second Amendment in our country,” LaPierre told the Conservative Political Action Conference in 2011. “Obama himself is no fool. So when he got elected, they concocted a scheme to stay away from the gun issue, lull gun owners to sleep and play us for fools in 2012. Well, gun owners are not fools and we are not fooled.” He added, “President Obama and his cohorts, yeah, they’re going to deny their conspiracy to fool gun owners. Some in the liberal media, they are already probably blogging about it.* But we don’t care because the lying, conniving Obama crowd can kiss our Constitution!”

And that seems to be the line of attack going forward. In February, he told CPAC that an Obama second term would mean “the end of our freedom forever.” He added, “If you don’t remember anything else I say today, write this down: This is the most dangerous election in our lifetime. If Obama wins, we’ll go to our grave mourning the freedom we’ve lost.”

Does Romney really believe any of this? It’s doubtful. He supported gun control laws as Governor of Massachusetts and practically never talks about the Second Amendment unless he really has to. But he’s willing to pander to those who do. Taking the stage just after LaPierre finished up a speech warning once more that “America as we know it will be lost forever” and imploring his media critics to jump off the Old North Bridge in Concord, Romney wasted no time in buttering up to his host:

“What a job Wayne LaPierre just did!”