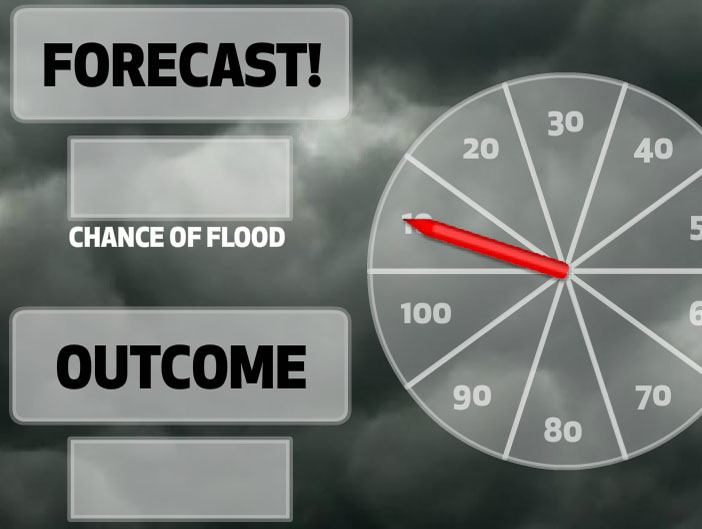 It’s a Friday morning, right before lunch, and the sixth day of a seven-day conference on human adaptation to climate change. It’s a good conference, but the consensus among attendees is that another PowerPoint presentation might make them puke. Which is probably why Pablo Suarez’s session on games and climate change is particularly well attended.

Suarez, the associate director of programs at the Red Cross/Red Crescent Climate Center, thinks that playing games will help us better prepare for a warming world. Famers, fishermen, shanty town dwellers, Red Cross volunteers, climate scientists, clergy members, donors, and members of parliament from Argentina and Uganda have all played games his program designed. These aren’t high-tech video games like Halo. They’re more like Dungeons & Dragons or Settlers of Catan, but for climate change. And they’re meant to help people think through problems and work together to find solutions, while connecting groups that don’t often work together.

For his workshop as part of the Community-based Adaptation Conference in Hanoi, Vietnam, Suarez broke us into teams for a game meant to depict how one determines when and how to spent money on preparing for severe weather. Here’s how the game went down.

My team had seven people, including government staffers from the Zambia’s Ministry of Health and Pakistan’s Ministry of Interior, as well as an American academic, a French aid worker, and a communications guy based in Cairo. Each of us was given a six-sided die and 10 white beans to serve as our currency for the game. Each team also got its own six-sided die. Each player represented an individual community; our teammates would play neighboring communities. The goal was to have the most beans at the end of 10 rounds.

Before we started, each of us was asked whether we wanted to pony up one of our beans to invest in some disaster preparation—filling sandbags, revamping the radio system, stocking up on food supplies, for example. Then, we rolled the team die to see what our regional weather forecast would be, on a scale of one to six. Next, each of us rolled our own die to see our local forecast. If the sum of the team and personal dice was higher than 10, you had a weather disaster on your hands. Disaster response would cost you four beans. But, if you’d elected to pay that one bean upfront for protection, you were safe—you got to keep your beans.

After a few rounds, we were presented with another option: investing in regional forecasting technology. If our team had this, we would know the number on the team die ahead of time, giving us more information to use to decide whether or not to spend a bean upfront or risk losing four. Only two teams could have the forecasting, and it went to those that bid the biggest bunch of beans. My team didn’t venture enough beans, so we were stuck without it.

A few rounds later, there was another twist. Instead of the six-sided team die, Suarez subbed in an eight-sided die. “Have you heard of climate change?” he asked. “Things are changing. It’s unpredictable—more trouble, more risks, more chance of extreme events.”

Needless to say, the game got a whole lot harder after that. We were much more likely to be flooded out, and our bean supply was dwindling. It became an exercise in bean management, and in teamwork—trying to preserve as many beans as possible while still preventing floods. And I actually got stressed out about keeping my beans, and was feeling more than a little competitive about “winning.”

This is what groups like the Red Cross are dealing with all around the world, boiled down to one 45-minute game. Everyone has limited beans (money, resources, staff) and increasing needs. Suarez could have given us a snoozer of a slideshow on that, but instead we were all actively engaged in an activity that replicates what happens out in the world. Participants have to act in real-time. They have to work together. And they have to think and talk through the challenges and consequences.

“A lot of what I have to do I can do better using games,” said Suarez in an interview after the session. Their games are about different topics—dengue outbreaks, climate science, crop insurance—but all focus on “making decisions in the face of uncertainty.”

I ended up with four beans left. I didn’t go broke, but I also spent more than I needed to on preparation. I did not win the candy bar offered as the prize for the person who kept the most beans, but my village also survived the game without a major flood.

While some people might think of games as “nonserious,” Suarez said, going through the process helped create a richer dialogue and a shared experience among team members. And one thing’s for sure, he adds: “Traditional approaches aren’t working fast enough.”

Here’s a video of another Red Cross game in Senegal in 2009: