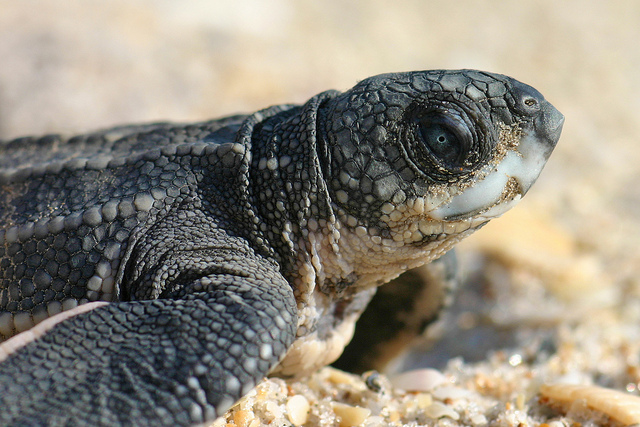 Unfortunately, a warmer and drier climate is also exactly what’s forecast for Costa Rica in a warming world in the coming century, according to IPCC projections… a whopping 3°C (5.4°F) warmer and 25 percent drier on the Pacific coast.

As the authors note, leatherback turtles are already critically in danger of extinction from egg poaching and  bycatch in fisheries. Now climate change threatens them further. From the paper:

Egg-burying reptiles need relatively stable temperature and humidity in the substrate surrounding their eggs for successful development and hatchling emergence. Here we show that egg and hatchling mortality of leatherback turtles (Dermochelys coriacea) in northwest Costa Rica were affected by climatic variability (precipitation and air temperature) driven by the El Niño Southern Oscillation (ENSO). Drier and warmer conditions associated with El Niño increased egg and hatchling mortality… Using projections from an ensemble of global climate models contributed to the IPCC report, we project that egg and hatchling survival will rapidly decline in the region over the next 100 years by ~50–60%, due to warming and drying in northwestern Costa Rica, threatening the survival of leatherback turtles. Warming and drying trends may also threaten the survival of sea turtles in other areas affected by similar climate changes. 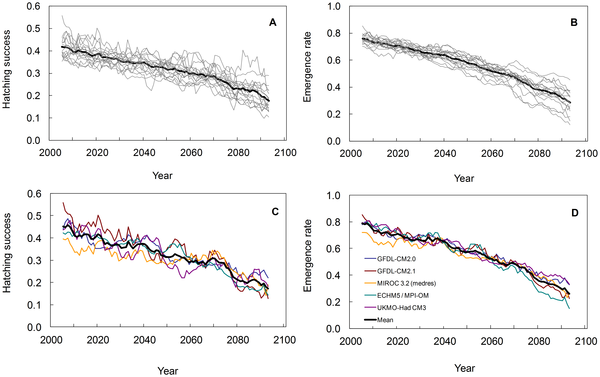 In the graphs above you can see the authors’ projections of both hatching success (the percentage of eggs within a clutch that develop completely) and emergence rate (the percentage of hatchlings that successfully emerge from the nest within two nights of the initial emergence event). From the paper:

Our model projected that both hatching success and emergence rate would significantly decrease between years 2001 and 2100 due to a warming and drying of the area encompassing northwest Costa Rica. Of the 17 IPCC models used here, 13 of them projected a decrease in precipitation while all models projected an increase in air temperature. Our projections indicated that hatching success would decrease from a 10-year moving average ~0.42 to ~0.18 from the beginning to the end of the 21st century, and emergence rate from ~0.76 to ~0.29. 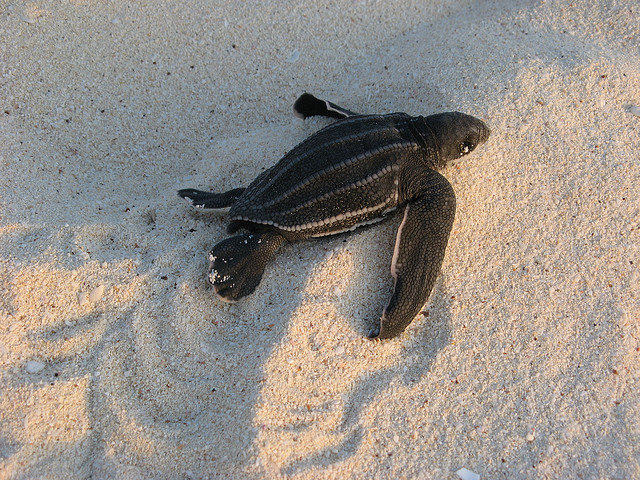 As the IUCN Red List notes, the decline in nesting of leatherback turtles has been far greater than 80 percent in most Pacific populations, the species’ major stronghold. Global adult female populations have fallen by more than 70 percent in less than one turtle generation. Current annual nesting  mortality for females is estimated at ~30 percent.

That means adult females stand a nearly one-in-three chance of dying every year.

Add to that the increasing rates of nesting failure in a warming world and you get the fast-track to extinction for a species that’s survived 110 million years of pre-human challenges.