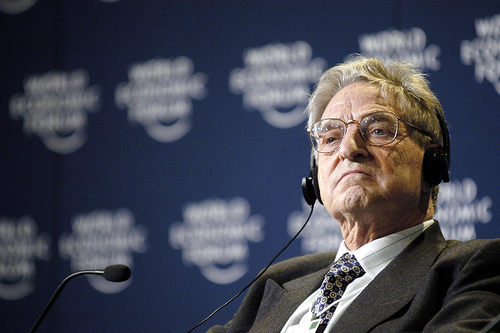 Bite your nails no longer, Democrats. Billionaire financier and philanthropist George Soros, the man who spawned a million right-wing conspiracy theories, has entered the 2012 political money wars in a big way, pledging $1 million each to a pair of liberal independent political groups.

Soros’ pledge, as the New York Times first reported, comes as a group of Democratic donors are expected to give as much as $100 million to left-leaning causes to register new voters, get out the vote, and elect Democrats (including President Obama) in the November elections. These donors, many of whom belong to an organization known as the Democracy Alliance, only represent one segment of the universe of big-time funders on the left.

But there’s a catch: These heavy-hitting Democratic donors aren’t keen on cutting six- and seven-figure checks to election-centric super-PACs such as Priorities USA Action, founded by two former Obama White House aides. The donors prefer bankrolling more established organizations committed to growing the ranks of the Democratic Party and building the progressive movement at the grassroots level.

Soros, for his part, split his pledge between American Bridge 21st Century, a super-PAC building a long-term opposition research hub, and America Votes, which brings together more than 300 progressive organizations to maximize their political clout. “As he has in the past, George is focusing his political giving in 2012 on grassroots organizing and holding conservatives accountable for the flawed policies they promote,” Soros spokesman Michael Vachon wrote in a Monday e-mail statement. (The Open Society Foundations, chaired by Soros, have supported Mother Jones‘ campaign finance reporting.)

Here’s more from the Times:

The advertising-oriented Democratic super PACs, including Priorities USA and two groups founded to back Democrats in Congress, remain on the list of organizations that the Democracy Alliance recommends to its members. Robert McKay, who is the chairman of the Democracy Alliance and sits on the board of Priorities USA, said the $100 million expected to be spent this year by alliance members would include some money for election ads, but would most likely favor grass-roots organizing and research groups.

“There is a bias towards funding infrastructure as it relates to the elections,” Mr. McKay said. “That means get-out-the-vote efforts” directed toward young voters, single women, black voters and Latinos, he said.

Organizations likely to be a part of the effort include Catalist, which creates voter lists for allied liberal groups; ProgressNow, a network of state-based Web sites for liberal opinion and activism; and the Latino Engagement Fund, a new group that works to register and turn out Latino voters for Democrats. Conservative independent groups are financing similar outreach to Latino voters: the American Action Network, which spent $26 million against Democratic candidates in 2010, last year unveiled the Hispanic Leadership Network, which will seek to mobilize center-right Latino voters.