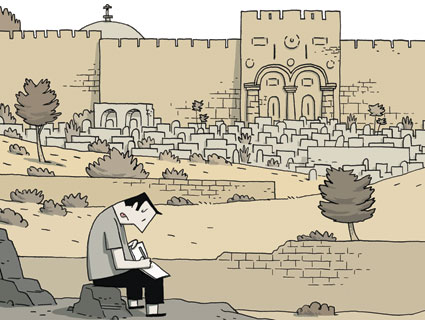 Guy Delisle makes comic books. But not that kind. A “graphic memoirist,” he creates thoughtful autobiographical travelogues about off-the-beaten-path locales. His latest, Jerusalem: Chronicles from the Holy City, follows French-Canadian househusband on a yearlong stay in the the fragmented, violent, often absurd world that is Israel and the Palestinian territories.

His earlier travel books have covered sojourns in China and North Korea, where he worked as an animator, and Burma, where he tagged along with his wife, Nadège, who worked for Médecins Sans Frontières (MSF, or Doctors Without Borders). He says he didn’t sell a huge number of his first book, Shenzhen: A Travelogue from China, “but things have changed a lot.” Jerusalem, the English language version of which just came out in April, hit the top of the New York Times Graphic Novel bestseller list and just won the prestigious Fauve d’Or prize for best comic album at this year’s International Comics Festival in Angoulême, France. The 46-year-old Delisle says the political subject matter appeals to people who usually regard comics as frivolous: “People go for these works—for more mature subjects.”

But even though Jerusalem is a meditation on politics and religion, it seems inadvertent. Delisle says he knew nothing about the Israeli-Palestinian situation when he landed at Ben Gurion airport in August 2008, accompanying Nadège on another MSF assignment: “I was a blank slate. I didn’t even know what a settlement was. I imagined it as a couple of little houses on a hill.”

What is most delicious about Jerusalem is its feeling of simplicity and detachedness. Delisle’s cartoon character—let’s call him Guy—is basically just a large angular nose with two dots for eyes and a plain boxy body. His personality is simple, too. Delisle says he uses specific elements of himself that work for a character who is just an observer: “He’s kind of naive, and stoic. Because it’s a different place, and there’s no way to judge or analyze what you are seeing.” There are plenty of scenes of Guy just sitting in a café, or, with his back to us, facing an austere landscape, sketching near an olive grove, or looking out at the Dead Sea.

In Jerusalem, Guy’s daily routine involves juggling daycare pickup, errands, and navigating his Arab neighborhood in East Jerusalem, all while trying to find time to sketch. But the personal becomes political. He’s always stuck in traffic because of the ubiquitous checkpoints and roadblocks. On the way to meet Nadège outside a crossing into Gaza, his driver tells him the tiny piece of land has been blockaded “because they voted for the wrong guy,” referring the Palestinian parliamentary election of 2006 that resulted in a victory for Hamas. And why does his family’s apartment have such crappy water pressure when “there’s a water tower right above our heads”? That water is for the settlements, his landlord explains.

“Newspapers are so partial and fragmented,” Delisle says. “I’m more of an ethnologist, but without the analysis.”

But Delisle and his cartoon counterpart “don’t do all the questions of the journalist: who, what, where, why, when.” He finds that those questions and their answers still don’t give you the big picture. “Newspapers are so partial and fragmented,” Delisle says. “I’m more of an ethnologist, but without the analysis.”

If Delisle doesn’t do editorial, the commentary comes in the form. The simple lines, chunks of blank space, and removed vantage point give the reader a nice bird’s eye—or God’s eye—view. In one scene, Guy looks down from his window on a party of Orthodox Jewish men. They look far away, but so does he. He climbs church stairs as we watch him from down below. He puts his daughter to bed and we pan back from her drowsy eyelids to a quiet dark square of bedroom. He sometimes seems like the Little Prince, a small man standing in a vast universe. From this perspective, everything is either beautiful or ridiculous.

Delisle’s own creative process is detached, too. He says he doesn’t start working on a book while he’s still living in the country. He takes notes, and then a few months after he’s back home, he decides if he has enough to work with.

So what’s next? Nadège is no longer with MSF, and their kids are older, so the family does not travel as much from their home in Montpellier, France. Maybe he’ll do a piece on a MSF member who was kidnapped in Chechnya. Maybe he’ll just keep up his blog (in French) with small pieces about fatherhood. It doesn’t really seem to matter to him.

For now, I’ll just imagine him as his cartoon self at a simple pen-and-ink table at some café, watching life go by, and then doing some sketching. 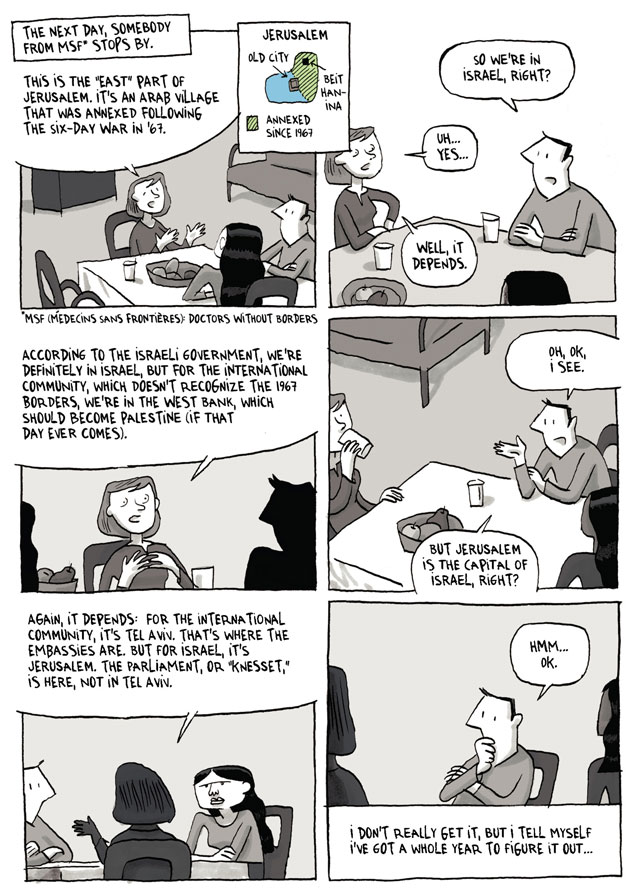