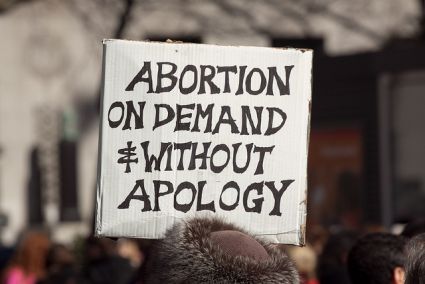 A group of congressional Republicans is pushing a bill to put key health care decisions in the hands of the states, rather than the federal government. But language buried in the legislation would do the opposite on one key issue: abortion.

Rep. Todd Rokita’s (R-Ind.) State Health Flexibility Act, also known as HR 4160, contains a provision that would force 17 states, including California, Massachusetts, and New York, to either discontinue programs that help low-income women pay for abortions, or spend a lot more money to purchase new insurance plans for those women. Thirty House Republicans have signed onto Rokita’s proposal since it was introduced in March*, and the Republican Study Committee, a group of conservatives that includes over 70 percent of the GOP caucus, made HR 4160 part of its official budget plan.

If passed, the bill “would block the only avenue left to states that wish to make safe and legal abortions accessible to low income women,” says Sara Rosenbaum, a health law expert at George Washington University.

The GOP bill is designed to change the way Medicaid—the federal health care program for the poor—operates. Currently, the federal government reimburses states for a percentage of the money they spend on Medicaid, provided states adhere to basic federal guidelines. But Rokita’s bill, like the House Republican budget drafted by Rep. Paul Ryan (R-Wis.), would shift the system to a block grant model, under which states would receive fixed quarterly grants from Washington and have the freedom to set up low-income health care programs largely as they wished. There would be little in the way of minimum standards, the value of federal funding would decline dramatically over time, and states would be free to boot millions of people from their Medicaid rolls. The Republican measure would give states more say over how they spend Medicaid funds, but it forbids them from covering abortions, even with state money—unless they purchase separate abortion-only plans or buy plans that include abortion coverage entirely with state funds. Either option could potentially cost these states millions of dollars.**

If passed, the bill “would block the only avenue left to states that wish to make safe and legal abortions accessible to low income women.”

A longstanding federal law, the Hyde Amendment, already bans states from spending federal Medicaid money on abortions, except in cases of rape or incest, or when the life of the mother is at stake. The 17 states that would be affected by Rokita’s bill have chosen (or been compelled by court order) to cover other abortions with their own money through state health plans that work in conjunction with Medicaid.

Those states do not generally purchase separate plans that cover abortion, several current state Medicaid officials and former state Medicaid directors told Mother Jones. Instead, they simply use state money to foot the abortion-related portion of the cost of the insurance. “We figured out what percentage of the premium dollars could be considered to cover abortion,” one former state Medicaid director explained. “From the state point of view it was all about the claiming of the dollars. We didn’t set up special plans.” (She asked not to be named to avoid being drawn into the national abortion debate.) Under the GOP proposal, that practice would be illegal.

Josh Britton, Rokita’s spokesman, said HR 4160 is not intended to change existing law but rather to “maintain the existing federal prohibition on funds being used for abortion.” The National Right to Life Committee’s Doug Johnson, one of the most important social issues lobbyists in Washington, says the same. “It appears to us that they would codify the policy that has long been applied to Medicaid,” he wrote in an email.

But health policy experts and reproductive rights groups insist otherwise. That’s “ridiculous,” Rosenbaum says. “The language could not be clearer.”

Rokita’s bill “would be a significant change from how current law operates today,” adds Judy Waxman, the vice president for health and reproductive rights at the National Women’s Law Center. Timothy Jost, a health law expert at Washington & Lee University’s law school who identifies as pro-life, also believes the bill would change the status quo. “Current law allows states to spend their own money on medically necessary abortions if they do not spend [federal matching funds] on it,” Jost wrote in an email. “This doesn’t seem to be what the provisions…say.”

Requiring states to purchase separate abortion-only plans “would be a change and one that would be harmful to women in those states,” Waxman says, noting that the current structure has stood for decades without interference from Republican or Democratic administrations.

The bill’s supporters have pitched it as a means to reduce the waste of taxpayer dollars by the federal government and to give states the ability to tailor their programs to best meet the needs of their citizens. Freedomworks, a conservative advocacy group and major backer of the tea party movement, has promoted the proposal.

Rokita’s bill is currently stalled in committee. But it offers a hint of what kind of legislation could become law if Republicans gain control of the Senate and the White House. After introducing the bill in March*, Rokita told an Indiana television station: “Take the federal government out of the way and you get the cookie-cutter mantra out of the way, and you let the state’s governors and officials have the flexibility, the say, to stretch those dollars, you find you really don’t need as much money over the years to serve those people that really need it.” Unless, of course, that flexibility extends to abortion access, in which case Rokita’s bill would give federal government the final word: no.

*Correction: An earlier version of this piece that was online briefly Thursday morning stated incorrectly that Rokita’s bill was introduced last month. It was introduced in March.

**Brian Straessle, a spokesman for the Republican Study Committee, called Thursday to note that states could hypothetically still cut checks directly to abortion providers if they so choose. That’s true, but the GOP bill would forbid states from spending those state dollars “in conjunction” with federal money, which means that the abortion payments would have to be administrated separately and likely managed by staffers outside the broader state health bureaucracy. This would represent a large, potentially costly change from existing law, requiring state governments to take on tasks previously handled by private-sector insurers. States currently cover some abortions through managed care policies for a reason: with managed care, private insurance companies handle the administrative work, and the state doesn’t have to hire additional government employees to do it. The GOP bill would make those kinds of partnership with outside insurers illegal unless the insurance policies (which also cover everything from checkups to cancer treatments) were bought entirely with state funds or didn’t cover abortion at all.

Page 7 of the bill says in plain English that states can use their own money to pay for abortions. The legislation also frees states from the mountain of costly bureaucracy required under current law, so they can spend more on patients and less on paperwork. In return, all states have to do is abide by the longstanding, bipartisan policy that that no federal funds be used to pay for elective abortion.

This echoes the statements of Johnson and Britton above, which other health law experts and reproductive rights activists I spoke to argued were misleading and Rosenbaum called “ridiculous.”