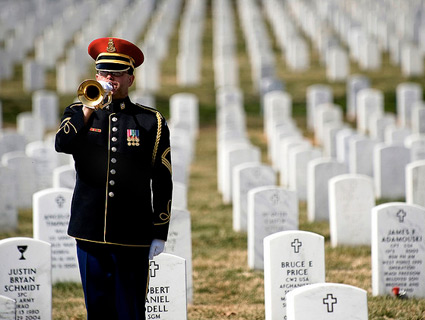 It’s weird when people have Memorial Day parties, mainly because what they’re actually doing is celebrating the annual “I get to barbecue and guzzle nothing but Yuengling on Monday when I would otherwise have to be at work all day” day.

The federal holiday, which has its roots in the aftermath of the American Civil War, was established to commemorate fallen soldiers. The spirit of Memorial Day doesn’t automatically lend itself to the same kind of party themes or patriotic bacchanalia that Independence Day or, hell, even Bill of Rights Day inspire.

Or as Dr. Steven Metz would say…

Dear businesses which send me email: if you wish someone a “happy Memorial Day” you don’t really understand the concept.

Well, people throw Memorial Day ragers regardless. And for those parties, they’re going to need music. So if I must, here are my suggestions—good songs that one way or another pay tribute to our men and women in uniform—fallen as well as living.

Given the holiday’s origin, let’s start with…

THE CIVIL WAR – The cast of Glory, “Oh My Lord”: In this scene from Edward Zwicks’ 1989 war drama, the men of the all-black 54th Massachusetts Volunteer Infantry gather around a campfire on the eve of their assault on Fort Wagner. The soldiers perform a bluesy Biblical hymn for one another, driven by harmonica, hand claps, and washboards. It’s raw, soulful stuff, and features poignant testimonials delivered by Morgan Freeman and Denzel Washington.

WORLD WAR I – Motörhead, “1916”: Yes, Motörhead is a British band, but this song applies to pretty much every serviceman who gave his life at the front lines of the Great War. The ballad (yes, Motörhead does ballads) tells the story of a 16-year-old infantryman “ready for history’s pages,” who dies in the trenches within a year of enlistment:

16 years old when I went to the war / To fight for a land fit for heroes. / God on my side, and a gun in my hand / Counting my days down to zero.

(As you can tell, the song isn’t exactly a feel-good rave-up; it’s best suited to being the song you play while you and your closest friends clean up the floaters, the empty vodka handles, and the crusting vomit after the rest of your Memorial Day party has absconded to the nearest Waffle House at 5:30 a.m.)

WORLD WAR II – Lead Belly, “Mr. Hitler”: The blues and folk legend Huddie William Ledbetter chides Adolf and cheers on the US armed forces with his 1942 song. The song is partially a blunt, loving tribute to the men in uniform who lived and died to “tear [Hitler’s] playhouse down!”

But we American people say, “Mr. Hitler, you is got to stop!”

This one works best when paired with an abundance of the most patriotic of American beers.

THE KOREAN WAR – Cake, “I Bombed Korea”: In 1994, the alt-rockers from Sacramento released their rickety, tongue-in-cheek take on moral ambiguity in wartime. Told from the perspective of a fighter pilot who “bombed Korea every night” and “didn’t know if [he] would live or die,” the song mixes goofy nihilism and real human tragedy into a low-fi shot of energy.

On a related note: Zeev Tene has a fantastic cover of this titled “I Bombed Beirut,” which was featured in the 2008 “animated documentary” Waltz with Bashir. The setting is changed to the 1982 Lebanon War, in which American forces were also briefly entangled.

THE VIETNAM WAR – Freda Payne, “Bring the Boys Home”: The R&B songstress nabbed her second gold record with this 1971 protest song. Against a backdrop of sweet, pop-orchestral strings, Payne salutes the troops and blasts the “senseless” American intervention in Indochina:

THE INVASION OF PANAMA – Van Halen, “Panama”: Toward the conclusion of the (rather sketchy) Operation Just Cause, American troops blared rock music at the Vatican embassy in Panama City in order to flush out the sanctuary-seeking General Manuel Noreiga, the dictator of Panama and former BFF with the CIA. One of the songs used in the LRAD salvo was—naturally—”Panama,” the 1984 hard-rock number about how much David Lee Roth loves cars.

Hey, at least our invading troops had a sense of dark humor when picking hit songs for their psychological warfare.

THE WARS IN AFGHANISTAN & IRAQ – John Fogerty, “Deja Vu, All Over Again”: Out of the sanctimonious overload of Iraq/Afghanistan/War on Terror-related pop tunes, John Fogerty’s 2004 title track quite possibly stands above the rest as the most enjoyable and (more importantly) the least forced or dated. The song is almost worthy of his louder, angrier Creedence days.

Day by day I hear the voices rising / Started with a whisper like it did before. / Day by day we count the dead and dying / Ship the bodies home while the networks all keep score.

Tell us your own Memorial Day faves in the comments below.