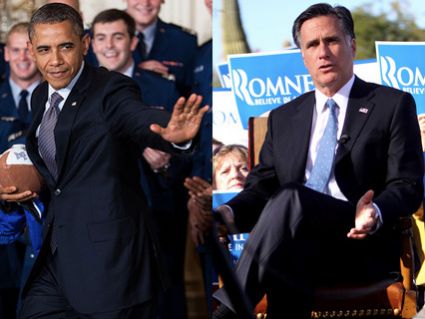 Barack Obama is ahead in the polls. Then Mitt Romney is. The president is leading among women. Then the likely Republican nominee is. Romney’s favorable rating is in the dumps. Presto! It’s above water. The volatility of the 2012 presidential race is a boon for pollsters and pundits, who every day, it seems, have new data to dissect and a new shift to explain.

The reasons for the movement in the polls can seem obvious. With Romney no longer being sniped at daily by fellow Republicans—and with him keeping his distance from reporters and no longer appearing at crazy-town debates—it’s no surprise his favorability numbers have crept upward. And with the economic recovery remaining sluggish—and the jobs picture still grim in many regions—Americans have cause to be frustrated with the status quo and the president. But for those who’d like to short-cut much of the nanosecond-by-nanosecond analysis, there is a fundamental dynamic to the race to consider: Many voters tend to like Obama but are disappointed that the economy has not rebounded more robustly on his watch. And many voters—perhaps some of the same voters—don’t like Mitt Romney, the awkward, say-anything quarter-billionaire, but they fancy the idea of a business-savvy Mr. Fix-It who can turn around the economy. Consequently, voters in the middle—those not propelled by partisan or ideological views and those not yet decided—will be tugged in opposite directions over the next five-and-a-half months, as they sort out conflicting impulses. Consequently, poll results will see-saw.

A Gallup poll conducted earlier this month found that 60 percent consider Obama more likable than Romney. And a recent Washington Post-ABC News poll noted that 56 percent held a favorable opinion of Obama; merely 35 percent said the same of Romney. But in other surveys Romney is doing better of late on the favorability front. A USA Today poll noted his favorable/unfavorable rating had flipped back to a net positive of 50/41 percent. This is not a shocker. With the wacky Republican primary contest completed, voters are no longer being subjected to nonstop Romney gaffes and constantly reminded of his 1-percentness and attendant policies.

Obama still retains a slight likability lead, and the recent months suggest that he will be able exploit that gap later in the campaign when Romney will be less avoidable. But the president faces a more daunting challenge with voters regarding who can best produce an economic makeover. From a recent USA Today poll:

A Fox News poll handed Romney a slight edge on the critical question of who would do better creating jobs, 43 percent to 41 percent.

Polls have shown that voters believe Obama understands their lives more so than Romney and cares more about the plight of middle-income Americans than his presumed Republican challenger. And that Fox News survey did ask respondents whether they’d rather have Romney or Obama as an investment adviser managing their money. Romney outperformed Obama 47 to 32 percent. But Fox News also inquired, “Who would you hire as a life coach?” Obama outscored Romney 47 percent to 33 percent.

This may be a glib way of casting the choice for voters. But it does aim at a basic feature of this election: Will voters be yearning for a by-the-numbers, get-the-job-done CEO, or a leader who might better address the aspirations and values of voters and reflect the national story those voters want told?

Many voters probably want both. And it will be tough for some to choose between these two meta-offerings. But Obama can be judged on his results. His policies have raised employment levels by about 4 million jobs. That’s more than his predecessor, but for some voters, it may not be sufficient. Romney, though, will be evaluated on his potential. There will be campaign quarrels over what he did when he led Bain Capital and when he was governor of Massachusetts. But the dominant question will be, can he supercharge the economy if he reaches the White House?

The idea of Romney appears to play better with voters than the actual man. When the issue is what Romney might do in office—rather than what the voters think of him as a person—he tends to score higher. Voters are drawn more to the concept of Romney—a successful business tycoon who can use his corporate know-how to boost the US economy—than the fellow in the suit.

It’s a president you know and like who has not engineered a complete economic turnaround versus a candidate you’re not too hot about but who might do better. For voters not predisposed toward a D or an R—not those who are voting for Obama because they fear right-wing Supreme Court appointees and not those who are voting for Romney to get rid of Obamacare—this is probably a difficult decision. Which means there will likely be much shape-shifting in the race through the summer and fall. It’s complicated—and the polls will reflect that until Election Day.