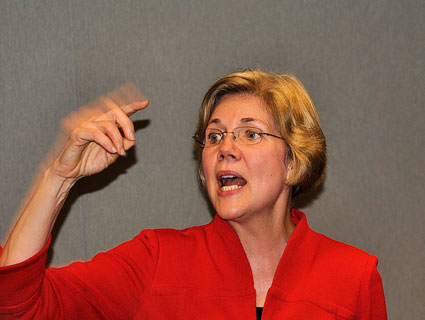 On Tuesday, Sen. Scott Brown (R-Mass.) went birther on Elizabeth Warren. “Serious questions have been raised about the legitimacy of Elizabeth Warren’s claims to Native American ancestry,” Brown said in a statement released to the press.

But given the available evidence concerning Warren’s ancestry, Brown is essentially implying there may have been an elaborate, years-long effort to fake his opponent’s heritage—not unlike the conspiracy envisioned by right-wing activists who sought “answers” about President Obama’s citizenship. (The Brown campaign did not respond to multiple requests for comment.)

This faux controversy stems from a series of articles in the Boston Herald, which reported that Warren had listed herself as Native American in a Harvard Law School faculty directory. (Brown’s top adviser, Eric Fehrnstrom, is a former Herald reporter.) This fueled criticism on the right that Warren had falsely claimed Native American status to advance her legal career. Now this bizarre kerfuffle has snowballed well beyond that, as conservatives pursue an in-depth probe of Warren’s great-great-great grandmother’s ethnicity and whether Warren’s great-great-great-uncle lied about it.

What’s known is this: As the Herald reported after publishing its initial story on Warren’s background, researchers at the New England Historical Genealogical Society believe that one of Warren’s great-great-great grandmothers, a woman named O.C. Sarah Smith, was Cherokee. If O.C. Sarah Smith was full-blooded, that would make Warren at least 1/32 Cherokee. (While that may seem insubstantial, Bill John Baker, the principal chief of the Cherokee nation, is also 1/32 Cherokee.) The NEHGS based its claim on a March 2006 newsletter referencing research by a woman named Lynda Smith. The newsletter reports that while digging into her own ancestry, Smith found a marriage application in which William J. Crawford, a son of O.C. Sarah Smith, listed his mother’s race as Cherokee.

The NEHGS considers the newsletter to be a legitimate source, says Tom Champoux, a spokesman for the group. “Genealogists do reference research conducted by others, with further verification sometimes provided,” he said in an emailed statement. “In the case of Native American research, it’s not uncommon for families to pass down family histories orally, especially with earlier generations, as paper evidence and primary documents were not kept.” But in this case there is a primary document cited—the marriage application.

Even this, however, has not been enough for Warren’s critics. A day after publishing its story revealing the marriage application, the Herald published a follow-up implying the document may not actually exist. The article argued that genealogists had been “unable to back up earlier accounts” of Warren’s ancestry because a copy of the marriage application has yet to be produced. Over at Breitbart.com, Michael Patrick Leahy, whose hobby is genealogy, has chimed in with a new wrinkle. Based on Census and other records, he argues that William J. Crawford either lied or was mistaken about his mother’s race:

[W]hy would Ms. Warren’s great-great-grand-uncle make up such a thing? Perhaps he showed the same kind of tendency towards ancestral “embellishment” that she herself seems to exhibit, or perhaps there was some logistical or tactical benefit in the Oklahoma Territory of 1894 to him and his intended bride that encouraged him to make the claim. Or perhaps he believed it to be true, even though in all probability it was not. We will likely never know.

(It’s hard to imagine why a man wouldn’t know his own mother’s ethnicity. At a time when Native Americans were being herded onto reservations at gunpoint, it’s unclear what conceivable benefit there would have been to falsely claiming Native American status. And even if William J. Crawford did lie for some reason, it’s hard to see how Warren could have known about it.)

By jumping into this controversy, Brown seems to be embracing the same tortured, birther-esque arguments as the conservatives who are trying to paint Warren (and her great-great-great-uncle) as a liar. Perhaps the better question is why Brown is raising these “serious questions” to begin with.