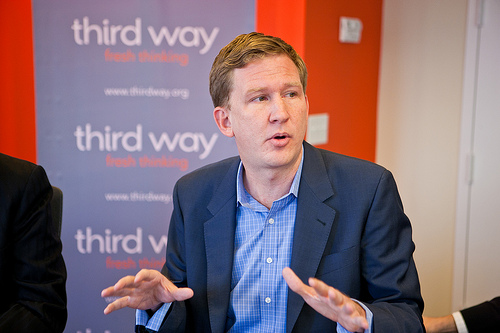 The politico in charge of helping Democrats keep control of the US Senate has a message for left-leaning donors: Wake up and open those checkbooks!

In an interview with the Huffington Post, Guy Cecil, executive director of the Democratic Senatorial Campaign Committee, put Democrats’ odds at even to retain the control of the Senate in this year’s elections. But Cecil worries about the gap in spending between Democratic and Republican outside spending groups, such as the US Chamber of Commerce and American Crossroads, the independent political juggernaut started by GOP gurus Karl Rove and Ed Gillespie.

“Money” is what keeps Cecil up at night, he said. “Our allies need to wake up,” he added. “Our allies need to understand that the majority in the Senate is in danger and that everything from jobs and the economy and women’s health and Supreme Court justices, Wall Street reform—all the things that they have worked so hard for—will be for naught if we lose the Senate.”

While Democratic Senate candidates have about $50 million more in the bank overall than their Republican counterparts, they have been outspent by a factor of nearly three to one—$29.1 million to $9.3 million—in the advertising wars, largely thanks to the outside groups and super PACs willing to spend unlimited amounts of money.

According to data provided by a Democratic source familiar with ad buys, the biggest spender on Senate races has been the US Chamber of Commerce, which has already pumped in more than $11 million for “issue” ads that benefit the GOP. After that come the Karl Rove-hatched groups American Crossroads and Crossroads GPS, with at least $7 million. The group 60 Plus, billed as a conservative alternative to the AARP, has spent more than $4 million.

The biggest spender on the Democratic side, meanwhile, has been the League of Conservation Voters, shelling out some $2.7 million, according to the source. The still-growing Majority PAC, a super-PAC formed by Democratic operatives to sway Senate races, has been good for $1.7 million.

“They need to—and we all need to—step up and make sure that our candidates have the resources they need, that we can push back on these super-PACs, that we can make sure our side of the story is heard,” Cecil said. “I am confident that if we can close the gap financially, we will hold the Senate. But it’s also a big if.”

In related news, Tom Donohue, the US Chamber of Commerce’s president and CEO, told members of his organization that the group plans to get involved in as many as a dozen Senate races this year. Donohue wouldn’t say exactly how much the Chamber would spend in the 2012 cycle—news reports have put it as high as $50 million—but, as Reuters reported, Donohue promised “it’ll be a lot of money.”