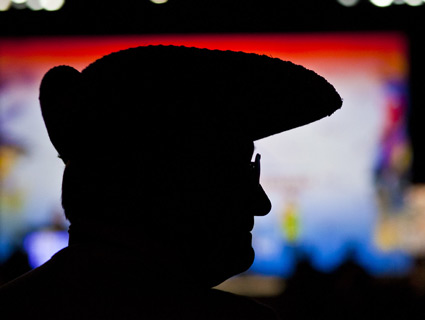 Following the defeat of Sen. Richard Lugar in Indiana’s GOP primary, the Tea Party Patriots were quick to claim partial credit for taking down the long-serving moderate. To underscore the group’s clout (and push back against chatter about the movement’s slow demise), TPP cofounder Jenny Beth Martin revealed to an interviewer that her organization’s most recent IRS filing shows that TPP had raised more than $12 million. This impressive figure wasn’t exactly proof of TPP’s role in dispatching Lugar, but Martin’s disclosure did raise a question: Where did all that money go?

The group’s full IRS filing, obtained by Mother Jones, offers details on TPP’s spending that may make conservative activists wonder about about TPP’s fiscal responsibility. It covers the fiscal year ending in May 2011 and shows that TPP spent hundreds of thousands of dollars on high-priced political fundraisers (in one case paying a firm tens of thousands of dollars more than it was able to raise during the reporting period), shelled out more than a half-million dollars in travel expenses, and paid its once-volunteer leaders six-figure salaries.

Complaints about frivolous spending have plagued TPP since the 2010 midterm elections, when some activists accused Martin and fellow TPP co-founder Mark Meckler of hiring expensive consultants and racking up big travel tabs. Since then, local tea party activists have continuiously griped that the national group directs scant funding to its state-based network of grassroots organizations and that it has been poorly managing the contributions it raked in.

It takes money to make money, as the saying goes, but TPP’s IRS filing—known as a 990—indicates that twice as much of its resources have gone toward fundraising than to actual program services. TPP spent $6.7 million on fundraising, about half its budget, which included $1.4 million in consulting fees paid to the Richard Norman Company, a direct mail and fundraising firm connected to many evangelical Christian groups. (Its owner, Richard Norman, is now TPP’s national finance chair.) All told, TPP’s filing indicates that it devoted only $3.4 million of the $12 million it raised to programs related to its mission.

Carol DeVita, a senior fellow at the Urban Institute’s Center for Nonprofits and Philanthropy, notes that new nonprofits like TPP sometimes face startup costs that aren’t incurred by more established organizations. But she says the imbalance between TPP’s fundraising and program expenditures could be problematic if it continues. “You’re getting a tax exemption because you’re doing charitable work,” she says, “and if your fundraising is higher than your programs than that can be reasonably seen as a red flag. Most nonprofit scholars would look at [TPP’s 990] and say that’s not a very healthy ratio.”

The tax form shows that TPP raised $680,581 through telemarketing handled by MDS Communications, an Arizona firm whose clients include the Republican National Committee and other Republican party organs. Once TPP paid MDS’ fee $665,581 fee, though, it netted only $15,000 from MDS fundraising during the reporting period. MDS president Jay Mount did not respond to a call for comment.

TPP also retained Capital Resources Inc., a prominent GOP telemarketing outfit based in Iowa. TPP paid Capital Resources $239,345 to raise $195,300, ending up with a loss of $44,000, during the period covered by tax filing. The company’s president Nicole Schlinger, who helped Mitt Romney win the critical Ames, Iowa straw poll in 2007, did not return a call for comment.

“As we have raised more and more money, now into the many millions of dollars, only a very small and insignificant portion of those funds are directed to grassroots on the ground,” TPP co-founder Mark Meckler wrote to the board.

Diana Banister, a spokeswoman for Tea Party Patriots, defended the use of expensive fundraisers, saying they’ve helped to significantly increase TPP’s budget. She told Mother Jones in an email that the performance of the group’s fundraisers is not fully reflected in the 990 because some of the donations solicited through the telemarketing may have not come in yet. “All of our fundraising vendors raised significant net income for TPP,” she says. “None of our vendors operated at a net loss.”

She adds: “Most start-up organizations will spend close to 100% of their funds the first year in fundraising costs as they are building their donor base. TPP spent only about 50% on fundraising, which is astonishingly low.”

Sandra Miniutti is the chief financial officer for Charity Navigator, a nonprofit group that evaluates other charities to help guide donors in making wise choices for their charitable giving. She took a look at TPP’s 990 for Mother Jones, and she notes that the newness of the organization makes it difficult to definitively evaluate its financial practices.

However, she disagrees with Banister about the use of expensive telemarketers. Her organization urges donors to hang up on telemarketers raising money for charities, because so little of their donations ever reaches the organization. Indeed, in disclosure forms filed in various states, TPP has acknowledged that some of its telemarketers will keep at least 75 percent of the money they raise. That means a tea party supporter who gives $100 to the group through this method will only end up giving TPP $25; the rest will go to the fundraiser.

Another big chunk of TPP’s budget went to salaries and travel expenses for the group’s once all-volunteer staff. TPP spent $758,000 on salaries and other compensation for eight staffers (including Meckler and Martin, who each earned more than $140,000). TPP spent $587,000 on travel, and a quarter-million dollars on legal fees associated with actions it has brought against other tea party activists, among other things.

Another TPP representative insists the group has not wasted its funds. The group has devoted its resources to “what it’s focused on—the grassroots—in the form of: training, issue education, webinars and tele-town halls, and mobilizing of volunteers,” he says. “Tea Party Patriots are building a nationwide grassroots infrastructure.”

That’s not how Meckler sees it. He parted ways with the organization in February, citing wasteful spending as one of the reasons for his departure. “As we have raised more and more money, now into the many millions of dollars, only a very small and insignificant portion of those funds are directed to grassroots on the ground,” he wrote in a letter to TPP’s board. He singled out the group’s $250,000 sponsorship of this year’s Southern Republican Leadership Conference as particularly egregious, calling it a “colossal waste” and “one in a long line of expenditures which I have opposed and which I believe are contrary to the obligations we have to be a good tea party steward of donor funds.”

Over the past two years, TPP has moved beyond its core mission of promoting fiscal responsibility by becoming involved in the culture wars, joining the “school choice” bandwagon, pressuring public schools to teach a controversial interpretation of the Constitution, and backing tangential initiatives. The change in focus has prompted some former leaders to question whether TPP has become a rent-an-advocacy group that has pushed specific issues on behalf of big donors.

“I noticed they were accepting funds from school choice [groups], so they’d run a whole program on school choice,” says Everett Wilkinson, who quit last June as TPP’s Florida coordinator. TPP has also supported a long-shot proposal called the Health Care Compact, which would allow states to opt out of the health care reform law. The initiative is being pushed by Texas millionaire Leo Linbeck III, whose advocacy group paid $250,000 to sponsor TPP’s “policy summit” in Phoenix last year. “That’s not really what our group was all about,” Wilkinson says. “It was almost as if we were paid off to look at other things.”

Banister disputes the notion that TPP picks issues based on donations. “The Tea Party Patriots engage in issues that fit within our core principles of constitutionally limited government, fiscal responsibility, and free markets, and are approved by a majority of our Local Coordinators,” she says.

Wilkinson is unpersuaded. While the national Tea Party Patriots group is flush with cash, much of it raised through fundraising pitches that tell donors the money will be directed to grassroots activities, its satellite organizations around the country are struggling on shoestring budgets, he says. Given that, the information revealed by the TPP’s tax form could well brew resentment in the ranks: “A thousand dollars would be a significant amount of money for them, yet these [national] people are raising millions and giving nothing back.”