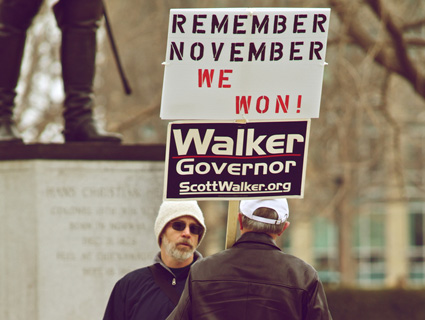 The tea party movement is kicking into gear again, buoyed by the success of Richard Mourdock in defeating longtime Sen. Richard Lugar in Indiana’s GOP primary. They’re intent on proving that the movement is not dead, as so many commentators have declared. To that end, the Tea Party Patriots (TPP), which claims to be one of the movement’s largest national umbrella groups, is recruiting volunteers for phone banks and promising a massive outpouring of support for embattled Wisconsin Gov. Scott Walker. The tea party has already been active in the recall fight, but is preparing to go all out in the last few weeks before the election.

Jenny Beth Martin, who heads Tea Party Patriots, told Breitbart News that the organization would be on the ground in the state by Wednesday and would be joining local tea party groups in setting up command centers for volunteers as well as “virtual call centers” so that people outside the state can help work the phones. “Wisconsin is pivotal, and it is ground zero for our political landscape,” Martin said. According to Breitbart News, she added that her organization was responding to a call for help from local groups “because they are exhausted from two years of non-stop campaigning, which they have been forced to do because of the left’s relentless tactics to thwart the will of the people.”

Tea Party Patriots could prove to be a formidable force in Wisconsin given the size of its fundraising machine; Martin recently bragged that the group raised $12 million last year.

And that could be problematic. As a nonprofit group, TPP is banned from devoting the bulk of its resources to campaign activities—those resources are supposed to be devoted to promoting social welfare, not political candidates, according to tax regulations. Yet TPP has been openly publicizing the fact that it’s supporting Walker in the election, and if it goes in for a big campaign in support of him, it may risk violating its tax-exempt status.*

The IRS recently announced its intention to crack down on nonprofit groups operating as thinly veiled political campaigns, and many of its recent targets have been tea party groups. As the IRS told the New York Times in March, “The promotion of social welfare does not include any unrelated business activities or intervention in political campaigns on behalf of or in opposition to any candidate for public office.”

The IRS has not said which groups it is going after, but Jay Sekulow, a conservative lawyer famous for fighting religious freedom cases, claims to be representing at least 16 tea party groups which have gotten inquiries from the IRS about their activities. Sekulow hasn’t specified who his clients are, but as one of the largest groups, Tea Party Patriots would likely be an attractive target for the IRS.

Marcus Owens, a former director of the exempt organizations division at the IRS, explains that the IRS rule also says that a nonprofit can engage in some electoral politicking “so long as their primary activity is furthering social welfare and not the campaign activity.” But it’s a difficult assessment for auditors to make, he explains, and it’s not one that’s likely to get made before the June 5 recall election. “The IRS rule looks to expenditures, but also any other factors that would bear on the determination of ‘primary activity’ for the organization,” Owens says. “Because of the expenditure aspect of the rule, the determination for 2012 can’t be made until the close of the tax year, so there is no effective way to know if they are going to meet the rule in 2012 at this juncture.”

Meanwhile, the tea party movement isn’t particularly popular in Wisconsin these days. A Marquette University poll this year found that 43 percent of respondents had an unfavorable view of the movement, while only 33 percent viewed it favorably. But with the tea party now adding lots of money and manpower to the recall race, which is a dead heat, its involvement could have an impact—even if it means running afoul of the IRS.

Clarification: After this post was published, a careful reader forwarded documents reminding me that Tea Party Patriots does not yet have official tax-exempt status from the IRS. Its application for tax-exempt status is apparently still pending, though it is still allowed to self-identify as such and thus is still required to follow the rules for tax-exempt groups. But technically, rather than risk losing its nonprofit status, TPP could instead be jeopardizing the possibility of ever getting it in the first place should it devote too many resources to political campaigns.