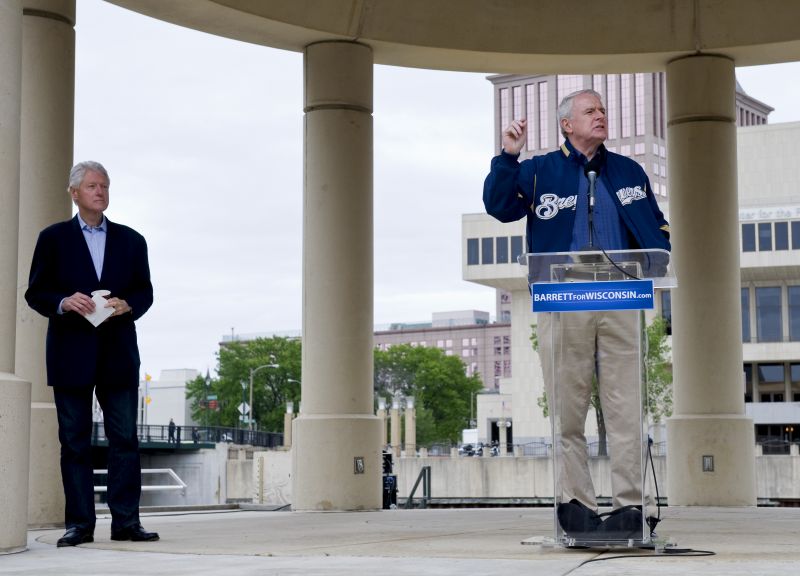 Bill Clinton, left, and Tom Barrett at a rally in Milwaukee on June 1, 2012.Brian Cahn/ZUMAPRESS.com

Former President Bill Clinton whipped a crowd of thousands into a frenzy Friday morning at a rally in downtown Milwaukee to support Milwaukee Mayor Tom Barrett, the challenger hoping to defeat Gov. Scott Walker in next week’s recall election.

Clinton hailed Barrett’s record on job creation in Milwaukee and his willingness to negotiate with unions, Republicans, and other stakeholders on tough financial decisions. The former president devoted even more of his 18-minute speech to slamming Walker, now 17 months into his first term as governor, for dividing Wisconsinites and sowing a climate of “constant conflict.” Clinton went so far as to paint Walker’s us-versus-them politics as contrary to the American spirit. “This divide-and-conquer, no-compromise crowd, if they had been in control, there never would have been a US Constitution,” he said.

Clinton’s visit was a last-minute addition to the slate of get-out-the-vote events by Democrats and Republicans on the eve of the June 5 recall. The event featured speeches from Mahlon Mitchell, the Democrats’ candidate in the lieutenant gubernatorial recall, Congresswoman Gwen Moore, Wisconsin Democratic Party chief Mike Tate, and Barrett himself.

“This governor said he was going to drop the bomb—drop the bomb on the people of this state,” Barrett said, repeating a frequent attack line of his. He called on those in the crowd to vote on Tuesday and urge friends and family to do the same, adding, “We are in this together.”

Clinton, who has admitted he’s not a fan of recall elections, played up the differences between Walker’s and Barrett’s governing styles, describing Walker as a leader who wants to “break the union” while Barrett tries to bring people together.

“For a hundred years now, people have looked to Wisconsin from all over this country to see a place of small towns and vibrant cities, a place of farmers and factory worker and small business people. To see a place where there were vigorous debates, closely held elections, and then people got together and figured out what the heck to do,” Clinton said. “Now they look at Wisconsin and they see America’s battleground between people who want to work together to solve problems and people who want to divide and conquer.”

Clinton went on, “You need a budget from the next governor that deals with whatever the realities are but where there is shared responsibilities and shared sacrifice—not winner take all.” And Tom Barrett, Clinton said again and again, was the governor to do that.