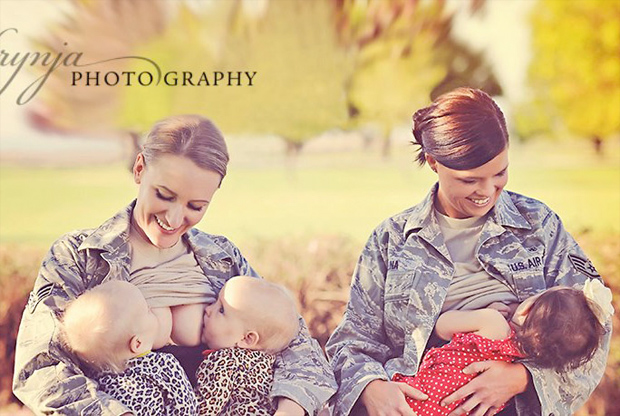 It certainly got attention. “A lot of people are saying it’s a disgrace to the uniform,” Crystal Scott, the founder of Mom2Mom, told NBC this week. “They’re comparing it to urinating and defecating [while in uniform].” Now, a viral debate’s busted out over the propriety of Uncle Sam’s finest nursing while dressed for battle.

The funny thing is, the military takes a relatively progressive attitude toward service members breastfeeding. Each branch of service allows lactating mothers to defer overseas deployments by 4 to 12 months. And the Air Force even mandated regular break periods and safe spaces for women to breastfeed or pump while on duty, two years before Obamacare required all employers to observe similar provisions.

But this isn’t about the service’s breastfeeding policy, right? It’s about disrespecting America! “So this is the modern military…No apparent sense of military bearing, personal restraint, or consideration for the uniform is required,” Army veteran Rob McCaskell complained on the photographer’s Facebook page. “You wanted attention….congratulations on a mission accomplished and further showing how the military is so easily exploited to further a social or political agenda.”

To “nasty civilians,” accustomed to seeing nursing moms in parks and malls, this all might sound patently absurd. But there’s a time-honored tradition of completely arbitrary constraints on service members’ behavior while clothed in their work garb. Making out and chewing gum in uniform have long been no-nos. There’s the injunction on hands in pockets, the suggested rule against carrying umbrellas that aren’t black, and the bans on walking and smoking, walking and eating, walking and talking on a cellphone (probably a good rule of thumb for anyone). There’s even a Navy regulation forbidding sailors to pump gas in a work uniform—I’ve personally seen folks get cited for this.

While there are no explicit rules against breastfeeding in uniform, plenty of the critics think McCabe’s and Luna’s poses are unbecoming (not unlike pushing a baby carriage in uniform, which is considered “unmilitary,” according to one service spouse). “Why bother seeking privacy when it is deemed perfectly acceptable by so many, under the auspice of a beautiful natural act and maternal duty, to just let it all hang out?” McCaskell, the Army vet, lamented sarcastically. Another commenter at Air Force Times finger-wagged the women: “‘service before self’ is one of the three AF core values. people know of the core values before they even sign the contract to come into the AF. if you cannot fulfill this, you are welcome to remain a civilian.”

The gist of these comments—women are free to breastfeed in private, but they should observe a higher standard in uniform!—actually mirrors a long-standing (and specious) conservative argument against women and gays in the military. In this convoluted argument, the armed forces constitute a “nonsexual zone of trust” where “a person doesn’t have to wonder whether what is said or done carries some sort of sexual implication or not.” Lift a ban on gays, or on women in combat, and the military’s missions will be hampered by sexual tension. Likewise with breastfeeding: Don’t let your squadmates catch a glimpse of nipple! It might conjure impure thoughts and awkward conversations, impairing their ability to effectively deploy grenades in combat!

Of course, anyone who’s ever served in the military knows there’s no such thing as a nonsexual zone—there’s not really any privacy to speak of. What there is, instead, is a baseline level of tolerable close contact and sexual tension—a level that’s traditionally been set by the mostly straight, mostly male majority of service members. As the composition of the service changes, so does that level of tolerability. And it’s that change that scares traditionalists. Which is perhaps why there were plenty of vets on the comment boards willing to support McCabe and Luna. “I have three children who I breast fed,” Gina Holbrook Mitchell, a 10-year Air Force veteran, wrote at Air Force Times. “With my first, I felt uncomfortable doing it because people seemed to look at me like I was out of my mind for leaving my post to pump. These women are proud mothers and proud soldiers. I think these photos do nothing but enhance the prestige of the military for all.”

The traditionalist impulse, though, isn’t unique to conservatives or men. In fact, when it comes to breastfeeding, it’s so pervasive that even some military women side with the cultural fuddy-duddies. “Women before us have worked too hard to earn and retain the respect of their male peers,” wrote one commenter on the exhaustive website breastfeedingincombatboots.com, who identified herself as a retired Marine officer. “I don’t want my Marines to look at me any other way than as a Marine. When I am asking them to fly into combat with me and do a dangerous mission, I do not want them to have the mental image of a babe at my breast. I want them to only see me as a Marine.”

The commenter assumes, of course, that the appropriate archetypal image of a Marine is sexless. (Or, at least, boobless.) Which leads to another assumption: that there’s something inherently sexual about a woman nourishing a child with breast milk. Neither of those assumptions holds. No one is asexual (least of all Marines, at least in my experience), and no nursing mother should have to accept a cultural taboo that marks her as a sex object for doing what comes naturally.

In an interview with the Today show Wednesday, McCabe swatted aside the criticisms and said she’d pose for the photos again. More than that, she said, breastfeeding in uniform stands as proof positive that women can hack it in the most challenging conditions the armed forces have to offer: “If anything, it should make people look at you as someone who is able to multitask.”