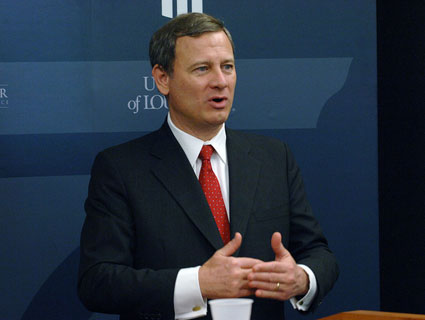 There’s a thread of early analysis of the Supreme Court’s ruling on the Affordable Care Act that says that Justice John Roberts may have rescued the Affordable Care Act but doomed future liberal projects. This counterintuitive argument stems from Roberts’ analysis of the Commerce Clause, the section of the Constitution that authorizes most of the federal government’s attempts to regulate the economy.

In the court battle over Obamacare, the government had argued that the individual mandate—the part of the health care law that requires Americans to purchase health insurance or pay a fine—was constitutional because the Commerce Clause gives Congress the authority to regulate interstate commerce. The government’s lawyers said that without the mandate, the health care law wouldn’t work, and because not having health insurance substantially affects the health insurance market (i.e., it affects interstate commerce), it was okay to fine people for not buying insurance. Conservatives argued that the mandate was not really regulating commerce, but forcing people to engage in it. They claimed the Commerce Clause allowed Congress to regulate “activity” but not “inactivity”—a distinction found nowhere in the Constitution itself.

Chief Justice John Roberts, despite voting to uphold the individual mandate as a tax, agreed with the conservative argument. As a result, some liberals are concerned—and some conservatives and libertarians are encouraged—by Roberts’ reasoning, despite the fact that Obamacare largely survived.

For example, Georgetown Law Professor Randy Barnett, one of influential legal minds behind the challenges to Obamacare, told the Washington Post‘s Ezra Klein that “we won,” because “all the arguments that the law professors said were frivolous were affirmed by a majority of the court today.”

Barnett is a smart man, and he’s justified in feeling proud that Justice Roberts adopted some of his arguments in the majority opinion. But the impact of Roberts’ ruling, as far as the Commerce Clause goes, will be pretty limited. Roberts wrote in his opinion that “The Commerce Clause is not a general license to regulate an individual from cradle to grave, simply because he will predictably engage in particular transactions.” In other words, he adopted the “inactivity/activity” distinction that opponents of the law, including Barnett, argued made the law unconstitutional.

Fair enough. But Roberts’ opinion upholds the Affordable Care Act under Congress’ taxing power, because, “it is abundantly clear the Constitution does not guarantee that individuals may avoid taxation through inactivity.” So you can’t “regulate” inactivity under the Commerce Clause, but you can tax it. Or as New York University Law Professor Barry Friedman* told the Washington Post‘s Greg Sargent,  “They can’t make you eat broccoli, but they can tax you for not eating it.” (That’s not exactly right, in my view: They can tax you for not buying it.) Roberts says the government can’t compel you to do something under the Commerce Clause, but it can still tax you for not doing it. It’s difficult to see how that meaningfully constrains future liberal projects.

Liberals do have one reason to be concerned about the Supreme Court’s ruling—but it’s the court’s reasoning on the expansion of Medicaid, not the Commerce Clause, that should worry them. Medicaid is a federal program in which the states get money to provide health insurance coverage for the poor. The only catch is that for Medicaid to be constitutional, the states have to be able to say no.

The Affordable Care Act substantially expanded Medicaid coverage so that it would cover 16 million more Americans, but it forced states to either take the new funding or give up all the Medicaid funding they were already getting. The high court said that was not kosher.

The Medicaid part of the ruling represents the first time the Supreme Court has struck down a federal spending law in 75 years, UCLA School of Law professor Adam Winkler notes. It’s an unusual outcome, but it wasn’t a close vote. Justices Elena Kagan and Stephen Breyer, who were both appointed by Democratic presidents, joined the conservative wing of the court in arguing that the Medicaid expansion was unconstitutionally coercive—”a gun to the head,” of the states, in Roberts’ wording. But all that “coercive” means here is that conservative politicians would have to face the wrath of their constituents for refusing free money from the federal government. Thursday’s ruling allows those governors to refuse Medicaid expansion without putting their existing federal Medicaid funding at risk.

“Do they refuse that generous federal funding and place the most vulnerable of their constituents at risk? I don’t know how many states are going to do that,” says Elizabeth Wydra, chief counsel at the liberal Constitutional Accountability Center.

Nevertheless, the court’s ruling leaves open the question of whether past and future federal funding for education, transportation, and other national priorities could be at risk, because the federal government often uses financial incentives to persuade states to do things that the federal government doesn’t have the authority to do.

But although the Supreme Court’s ruling suggests that there’s a limit on the conditions the federal government can attach to money it sends to the states, it’s not clear what that limit is. That limits the decision’s impact. “The healthcare cases do not impose strict new limits on the spending power,” Winkler says. “There’s no majority opinion to set out such limits. Seven justices agreed that states can’t be denied all Medicaid funds for failing to expand their programs. But no five agreed on the reasons why.”

Not to be entirely cynical about it, but Supreme Court Justices are lords of the realm. They can rule how they want, and a different lineup on the court—say one with a few more Democratic appointees—could reject this reasoning entirely.

The Medicaid ruling is a concern. But the good news for liberals in the Affordable Care Act ruling is concrete and easy to see. The dangers are, for now, entirely hypothetical.