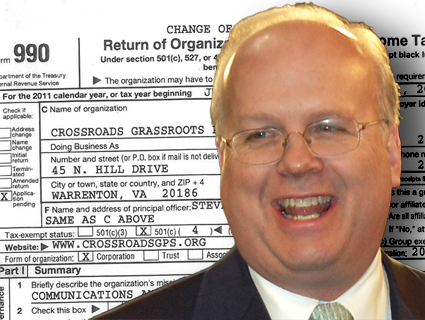 Here at Mother Jones we talk about “dark money” to broadly describe the flood of unlimited spending behind this year’s election. But the truly dark money in 2012 is being raised and spent by tax-exempt groups that aren’t required to disclose their financial backers even as they funnel anonymous cash to super-PACs and run election ads.

By Internal Revenue Service rules, these 501(c)(4)s exist as nonpartisan “social welfare” organizations. They can engage in political activity so long as that’s not their primary purpose, but skirt that rule by running issue-based “electioneering communications” that can mention candidates so long as they don’t directly tell you to vote for or against them (wink, wink), or by giving grants to other politically active 501(c)(4)s. (Super-PACs, on the other hand, can spend all their money endorsing or attacking candidates, but must disclose their donors.)

Some overtly partisan dark-money groups are better at dancing around these rules than others. Last month, the IRS stripped an organization called Emerge America of its 501(c)(4) status. As it informed the group, which explicitly works to elect Democratic women, “You are not operated primarily to promote social welfare because your activities are conducted primarily for the benefit of a political party and a private group of individuals, rather than the community as a whole.” Sure enough, Emerge America’s mission statement on its 2010 tax form made no attempt to hide this fact: “By providing women across America with a top-notch training and a powerful, political network, we are getting more Democrats into office and changing the leadership—and politics—of America.” D’oh!

Emerge America certainly isn’t the only 501(c)(4) to walk the line between promoting social welfare and promoting a political party. It just wasn’t savvy or subtle enough to not get busted. Other dark-money groups tend to describe their missions in broad terms that are unlikely to raise an auditor’s eyebrows. But how they spend their money suggests their actual agendas. A few examples:

What it is: Conservative dark-money group cofounded by former Sen. Norm Coleman (R-Minn.).
Mission statement (as stated on tax forms): “The American Action Network is a 501(c)(4) ‘action tank’ that will create, encourage, and promote center-right policies based on the principles of freedom, limited government, American exceptionalism, and strong national policy.”
How it walks the line: AAN spent $20 million in the 2010 election cycle targeting Democrats, including producing ads that were pulled from local airwaves for making “unsubstantiated” claims, but $15 million of that went toward issue ads. Last week, Citizens for Responsibility and Ethics in Washington claimed that from July 2009 through June 2011 AAN spent 66.8 percent of its budget on political activity, an apparent violation of its tax-exempt status. CREW is calling for an investigation, suggesting that “significant financial penalties might prod AAN to learn the math.”

What it is: The 501(c)(4) of Karl Rove’s American Crossroads super-PAC
Mission statement: “Crossroads Grassroots Policy Strategies is a non-profit public policy advocacy organization that is dedicated to educating, equipping, and engaging American citizens to take action on important economic and legislative issues that will shape our nation’s future. The vision of Crossroads GPS is to empower private citizens to determine the direction of government policymaking rather than being the disenfranchised victims of it. Through issue research, public communications, events with policymakers, and outreach to interested citizens, Crossroads GPS seeks to elevate understanding of consequential national policy issues, and to build grassroots support for legislative and policy changes that promote private sector economic growth, reduce needless government regulations, impose stronger financial discipline and accountability on government, and strengthen America’s national security.”
How it walks the line: The campaign-finance reform group Democracy 21 has called Crossroad GPS’ tax-exempt status a “farce,” pointing to $10 million anonymously donated to finance GPS’ anti-Obama ads. Likewise, the Campaign Legal Center wants the IRS to audit GPS. According to its tax filings, between June 2010 and December 2011 GPS spent $17.1 million on “direct political spending”—just 15 percent of its total spending. Yet it also spent another 42 percent of its total spending, or $27.1 million, on “grassroots issue advocacy,” which included issue ads.

What it is: Dark-money group of the Americans for Prosperity Foundation (which was founded by David Koch).
Mission statement: “Educate U.S. citizens about the impact of sound economic policy on the nation’s economy and social structure, and mobilize citizens to be involved in fiscal matters.”
How it walks the line: Since 2010, Americans for Prosperity has officially spent about $1.4 million on election ads. However, the group’s 2010 tax filing shows that $11.2 million of its $24 million in expenses went toward “communications, ads, [and] media.” In May, an anonymous donor gave AFP $6.1 million to spend on an issue ad attacking the president’s energy policy. Just before Wisconsin’s recent recall election, AFP sponsored a bus tour to rally conservative voters. But its state director said the tour had nothing to do the recall: “We’re not dealing with any candidates, political parties, or ongoing races. We’re just educating folks on the importance of [Gov. Scott Walker’s] reforms.”

What it is: Dark-money arm of former House Majority Leader Dick Armey’s Tea Party-aligned super-PAC of the same name
Mission statement: “Public policy, advocacy, and educational organization that focuses on fiscal on economic issues.”
How it walks the line: FreedomWorks’ 501(c)(4) hasn’t spent any money on electioneering this election, but it has funneled $1.7 million into its super-PAC, which has spent $2.4 million supporting Republican campaigns. FreedomWorks has focused its past efforts on organizing anti-Obama Tea Party protests and encouraging conservatives to disrupt Democratic town hall meetings to protest the party’s health care and renewable energy policies.

What it is: Conservative nonprofit that sued the Federal Election Commission in 2008, resulting in the Supreme Court’s infamous Citizens United ruling.
Mission statement: “Citizens United is dedicated to restoring our government to citizens [sic] control. Through a combination of education, advocacy, and grass roots organization, the organization seeks to reassert the traditional American values of limited government, freedom of enterprises, strong families, and national sovereignty and security. The organization’s goal is to restore the founding fathers [sic] vision of a free nation, guided by honesty, common sense, and goodwill of its citizens.”
How it walks the line: Since its formation in 1988, the nonprofit has released 19 right-wing political documentaries, including films narrated by Newt Gingrich and Mike Huckabee, a rebuttal to Michael Moore’s Fahrenheit 9/11, and a pro-Ronald Reagan production (plus the upcoming Occupy Unmasked). On its 2010 tax filing, Citizens United reported spending more than half of its $15.2 million budget on “publications and film” and “advertising and promotion.”