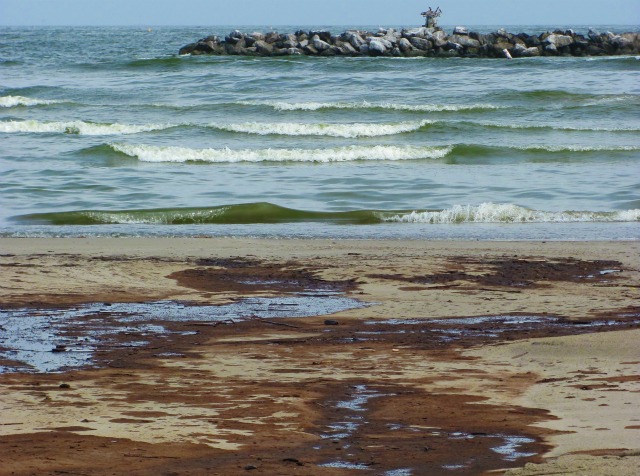 Oiled beach, Grand Isle, Louisiana, 2010: © Julia Whitty The damage may be invisible to the naked eye but researchers report dramatic changes to the community of microbes living in the sands along shorelines oiled by BP’s Deepwater Horizon catastrophe.

These communities of the very small—comprised of microscopic worms, fungi, protists, algae, and the larval stages of larger species less than a millimeter in size—underpin vital ecosystem functions in the ocean. They provide food and nutrients for other species, churn the sediments, and contribute to the cycling of carbon, nitrogen, and sulfur within marine ecosystems. From the paper in PLoS ONE:

Microbial eukaryotes inherently underpin all higher trophic levels, and thus, understanding the biological impact and subsequent recovery of these communities is critical for interpreting the long-term effects of the D[eepwater] H[orizon] oil spill. 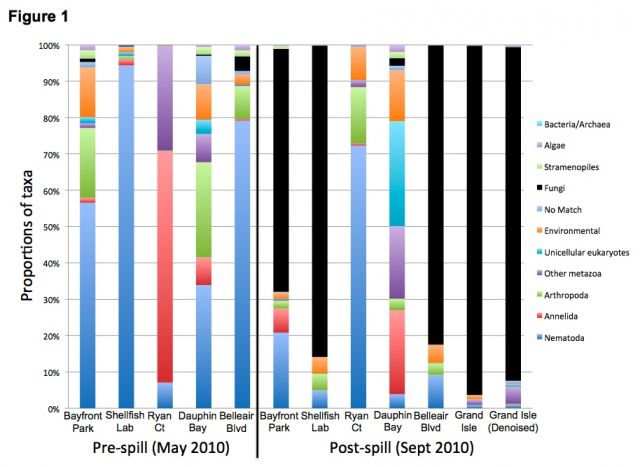 “In addition to the inherent toxicity of hydrocarbon compounds, the unprecedented spill response effort likely had significant implications for microbial eukaryote communities. At the time of sample collection the (closed) beach at Grand Isle, Louisiana, was undergoing persistent, heavy oiling and a large-scale mechanical cleanup response.”

Before oil ravaged the coast, Gulf beaches teemed with a diverse mix of microbes living in the sand.

Four months later the population was radically changed: no longer diverse, instead largely dominated by only a few species of fungi and nematode worms.

“It went from a very diverse mix of species to being dominated by a few predators and opportunists,” says lead author Holly Bik, a postdoc at the University of California Davis.

In the graphs above you can see the proportions of taxa and how they changed at five beaches around Dauphin Island and Mobile Bay, Alabama, with an additional post-spill site along a persistently oiled beach in Grand Isle, Louisiana.

The researchers determined the makeup of these invisible communities by extracting DNA and sequencing millions of genetic “barcodes.”

By September 2010, four months after the wellhead blowout, the deceptively clean appearance of Gulf beaches barely hinted at the true biological story underway.

“What struck me,” says Bik, “was that you wouldn’t have known there was an oil spill—most of our sample sites looked like normal beaches. But when we analyzed the genomic data, there seemed to be all these biological repercussions going on.”

The team continues to collect and analyze samples from these same beaches. Expect more publications. 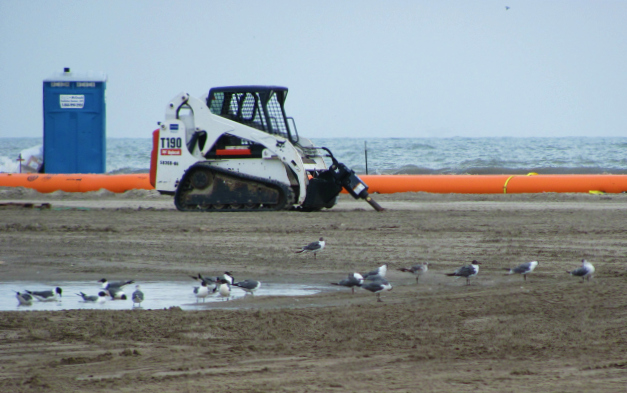 [W]hile pre-spill samples exhibit high richness and evenness of genera, post-spill communities contain mainly predatory and scavenger taxa alongside an abundance of juveniles. Based on this community analysis, our data suggest considerable (hidden) initial impacts across Gulf beaches may be ongoing, despite the disappearance of visible surface oil in the region.

As I’ve reported before (here, here, and here), we’re just now beginning to get a sense of the deadly aftereffects of BP’s disaster on dolphins, fish, seabirds, and other wildlife of the Gulf and beyond. Oh, and it’s not that great for human life either.