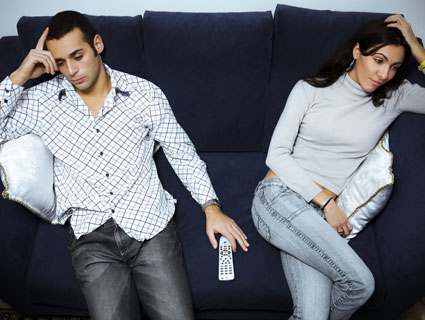 With congressional Republicans beating the drum about profligate and wasteful government spending, they may want to take a hard look at a federal program pushed by a host of top GOPers during the Bush-era and reauthorized in late 2010, as the Republican deficit craze took hold. Originally championed by Republican lawmakers including Iowa Sen. Chuck Grassley, former Pennsylvania Sen. Rick Santorum, and current Kansas Gov. Sam Brownback, a federal initiative to promote marriage as a cure for poverty dumped hundreds of millions of dollars into programs that either had no impact or a negative effect on the relationships of the couples who took part, according to recent research by the Department of Health and Human Services (HHS).

Launched during the Bush administration at the behest of evangelical Christian activists and with the aid of congressional Republicans, the federal Healthy Marriage Initiative was designed to help low-income couples put a little sizzle in their marriages and urge poor unmarried parents to tie the knot, in the hopes that marriage would enhance their finances and get them off the federal dole. Starting in 2006, millions of dollars were hastily distributed to grantees to further this poverty reduction strategy. The money went to such enterprises as “Laugh Your Way America,” a program run by a non-Spanish speaking Wisconsin minister who used federal dollars to offer “Laugh Your Way to a Better Marriage” seminars to Latinos. It funded Rabbi Stephen Baars, a British rabbi who’d been giving his trademarked “Bliss” marriage seminars to upper-middle-class Jews in Montgomery County, Maryland, for years. With the help of the federal government, he brought his program to inner-city DC for the benefit of African American single moms.

The marriage money was diverted from the Temporary Assistance for Needy Families program (formerly known as welfare), and much of it went to religious groups that went to work trying to combat the divorce rate in their communities by sponsoring date nights and romance workshops. In some cities, the local grantees used their federal funds to recruit professional athletes to make public service announcements touting the benefits of marriage. Women’s groups were especially critical of the marriage initiative, largely because it was the baby of Wade Horn, a controversial figure who Bush installed at HHS as the head of the Administration for Children and Families and the administration’s official “marriage czar.”

Before joining the Bush administration, Horn, a conservative psychologist, had helmed the National Fatherhood Initiative, where he attacked what he called the “we hate marriage” elites and infuriated women’s groups by defending the Southern Baptist Convention’s proclamation that women should “submit” to their husbands’ “servant leadership.” Horn believed that federal poverty programs should be vehicles for marriage promotion, once proposing that the federal government exclude unmarried people from anti-poverty programs like Head Start and from public housing. Horn’s deputy was Chris Gersten (husband of former Bush Labor Secretary Linda Chavez), who implemented the program and who is a strong believer in the value of “relationship education” in combating the social scourge of the disintegrating traditional family.

“A middle class couple with $100,000 a year that’s having trouble in their marriage, they can go out and spend $200 or $300 or $400 to get some classes that help them,” he explains. “But a poor couple isn’t going to spend the rent money on relationship classes.”

Studies show that relationship classes can be helpful for white, middle-class couples, but when the federal government started dumping million of poverty dollars into marriage education, there was virtually no research on how such programs would fare with poor, inner-city single moms. Now, though, the data is in, and it doesn’t look good for proponents of taxpayer funded marriage education. This month, HHS released the results of several years of research about the performance of the marriage programs, and it indicates that the Bush-era effort to encourage Americans (straight ones, at least) to walk down the aisle has been a serious flop.

At a recent conference sponsored by the HHS Office of Planning, Research and Evaluation, researchers looking at various aspects of the marriage initiative presented their findings. They had nothing but bad news.

Take the Building Healthy Families program, which targeted unmarried but romantically involved couples who were either new parents or expecting a baby. The program, tested in Baltimore and seven other cities, offered participants many weeks of marriage education classes that focused on improving their relationships with the hopes that this would also help their children. Three years later, researchers reported that the program had produced precisely zero impact on the quality of the couples’ relationships, rates of domestic violence, or the involvement of fathers with their children. In fact, couples in the eight pilot programs around the country actually broke up more frequently than those in a control group who didn’t get the relationship program. The program also prompted a drop in the involvement of fathers and the percentage who provided financial support.

In a few bright spots, married couples who participated in a government-funded relationship class reported being somewhat happier and having slightly warmer relationships with their partners. But the cost of this slight bump in happiness in the Supporting Healthy Marriage program was a whopping $7,000 to $11,500 per couple. Imagine how much happier the couples would have been if they’d just been handed with cash. Indeed, feeling flush might have helped them stay married. After all, the only social program ever to show documented success in impacting the marriage rates of poor people came in 1994, when the state of Minnesota accidentally reduced the divorce rate among poor black women by allowing them to keep some of their welfare benefits when they went to work rather than cutting them off. During the three-year experiment and for a few years afterward, the divorce rate for black women in the state fell 70 percent. The positive effects on kids also continued for several years.

Gersten isn’t persuaded by the research on the federal marriage initiative—at least not yet. He thinks the programs just need more time to work out the kinks. “I think in the long run you can’t justify funding programs that don’t show results, but I don’t think a couple years is adequate,” he says, acknowledging that the original marriage grantees often had trouble finding participants to offer their services to.

“There’s no demand,” he laments. “The culture isn’t saying, ‘You just had a baby, you need to figure out how to form a bond with the father.’ The culture did say that until the ’60s.” Gersten says that the culture of liberation, birth control, the sexual revolution, and, of course, the rise of the welfare state has “led to an out of wedlock birth rate in the black community of 60 to 70 percent. It’s devastating.” So he thinks the government needs to keep pushing marriage.

Given the underwhelming track record of the federal marriage program, it would seem a ripe target for GOP budget hawks, especially given that many of the original proponents of the program are no longer in Congress to defend it. Instead, in November 2010, Congress allocated another $150 million for healthy marriage and fatherhood related programs, with another $150 million budgeted for 2013. And this fall HHS doled out $120 million worth of grants.

Oddly enough, the program might have faded away without an unlikely supporter: President Obama. According to Gersten, the administration initially wanted to retool the marriage programs to focus them more on job training. But in a deal brokered by Grassley, one of the original sponsors of the program, and Sen. Max Baucus (D-Mont.), the marriage initiative remained mostly intact, though more of the money originally earmarked for it was shifted to programs promoting responsible fatherhood. Gersten says the administration approved the deal.

In its current form, the marriage program looks a little different under Obama than it did under Bush. Many of the more dubious marriage programs, including “Laugh Your Way America,” did not receive further funding, for instance. While faith-based groups continue to receive federal money, the ones in the program tend to be more established service providers that combine their marriage offerings with other social services for low-income people, such as employment help. When the administration issued the grant requirements, it insisted on the programs having a strong employment component along with the Oprah-style relationship classes.

Ron Haskins, a marriage program supporter who is a former adviser to Bush on welfare issues and a senior fellow at the Brookings Institution, thinks Obama did the right thing. He points out that research on poverty programs beloved by liberals, such as Head Start, doesn’t look so good either, but that doesn’t mean the government should simply get rid of it. “When there’s tremendous pressure on the budget, there is a reason for reducing the spending,” he says. “The exception is, if it’s a new program you ought to try to figure out if you can improve it.” Haskins notes that in the grand scheme of the federal budget, the marriage program is but a blip. “We don’t spend a lot of money on these programs. [We spend] $7 billion on Head Start, but not even a $100 million on these [marriage] programs.”