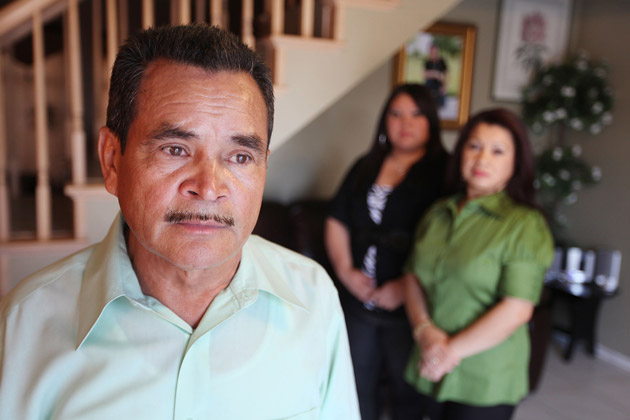 Francisco Reynoso, with his wife Silvia and daughter Evelyn in the background.Photo by J. Emilio Flores for ProPublica

A few months after he buried his son, Francisco Reynoso began getting notices in the mail. Then the debt collectors came calling.

“They would say, ‘We don’t care what happened with your son, you have to pay us,'” recalled Reynoso, a gardener from Palmdale, Calif.

Reynoso’s son, Freddy, had been the pride of his family and the first to go to college. In 2005, after Freddy was accepted to Boston’s Berklee College of Music, his father co-signed on his hefty private student loans, making him fully liable should Freddy be unwilling or unable to repay them. It was no small decision for a man who made just over $21,000 in 2011, according to his tax returns.

“As a father, you’ll do anything for your child,” Reynoso, an American citizen originally from Mexico, said through a translator.

Now, he’s suffering a Kafkaesque ordeal in which he’s hounded to repay loans that funded an education his son will never get to use—loans that he has little hope of ever paying off. While Reynoso’s wife, Sylvia, is studying to be a beautician, his gardening is currently the sole source of income for the family, which includes his 18-year-old daughter Evelyn.

And the loans are maddeningly opaque. Despite the help of a lawyer, Reynoso has not been able to determine exactly how much he owes, or even what company holds his loans. Just as happened with home mortgages in the boom years before the 2008 financial crash, his son’s student loans have been sold and resold, and at least one was likely bundled into a complex Wall Street security. But the trail of those transactions ends at a wall of corporate silence from companies that include two household names: banking giant UBS and Xerox, which owns the loan servicer handling the bulk of his loans. Left without answers is a bereaved father.

The risk of cosigning on Freddy’s loans seemed to have been worth it when he graduated in May 2008 and began looking for a job in the music industry. He was on the way back from a job interview on the evening of Sept. 4 when he lost control of his car and it rolled over. Freddy’s family learned of his death the next morning.

The grief was relentless; the debt collectors, ruthless. By law, debt collectors must go through a debtor’s attorney if one has been hired, but even after Reynoso hired an attorney, he said they continued to call him every day, several times a day, for about a year and a half: “I would tell them to call the lawyer. And they would still say, ‘The lawyer doesn’t owe us. You’re the one who owes us. You’re the one who has to pay us.'”

Meanwhile, Reynoso was still reeling: “I was crying for him every day,” he said.

The question of to whom Reynoso’s debts are actually owed—and who has the authority to forgive them—is a mystery that thus far neither Reynoso nor his lawyer has been able to solve.

One of Freddy’s student loans was cancelled after his death without a problem: his federal loan. That’s because the government cancels student loans if a student dies.

But the bulk of Freddy’s loans were private student loans, which typically offer less favorable interest rates and fewer consumer protections. Only a few private student lenders offer debt discharges in the event of the borrower’s death, though public outcry over specific cases has swayed lenders to grant occasional death discharges.

But for the Reynosos, just figuring out whom to appeal to has been an exercise in futility. Working with a law firm, Francisco Reynoso sent copies of Freddy’s death certificate to any company that sent paperwork about the loans. He remembers being told by at least one company that they’d call him to work out a solution. But no one ever did, he said, and the bills kept coming—each time larger than the last with more interest, more late fees.

“We sent out death certificates to all of them,” said Dolores Orozco-Serrano, a legal administrator with Borowitz & Clark, the bankruptcy law firm handling the Reynosos’ case. Only the federal loan was discharged. “Everyone else was not cooperative at all.”

Freddy Reynoso’s private loans were originated by two companies—Bank of America and Education Finance Partners. Neither company still holds onto them. ProPublica tried to find out who did.

First, the Bank of America loan: Almost as soon as Bank of America originated it, the loan was sold to a Boston-based company called First Marblehead, once one of the biggest securitizers of student loans. But nowhere in the paperwork sent to the Reynosos and reviewed by ProPublica does the name First Marblehead appear. Instead, the Reynosos have received paperwork emblazoned with the logo of National Collegiate Trust. That’s the name First Marblehead gave to bundles of loans that it turned into Wall Street securities and sold to investors. Was Freddy’s loan bundled into a security? And if so, who owns it now? First Marblehead has not returned repeated requests for comment.

Freddy Reynoso’s other loans followed an even more complicated path—and one tainted by scandal. Education Finance Partners, the private student loan company that originated the largest portion of Freddy’s student debts, reached a $2.5 million settlement agreement with the New York Attorney General’s Office in 2007 to settle charges that it had paid colleges across the country to steer students toward its high-interest loans. And Berklee College of Music, Freddy’s alma mater, was one of the schools singled out in that investigation for accepting the improper payments. Berklee College of Music spokesman Allen Bush acknowledged in a statement to ProPublica that the school accepted a total of $23,000 from Education Finance Partners between 2005 and 2007, but said that “all of these funds were deposited into a financial aid account and disbursed through a need-based grant system to current Berklee students.”

But who holds Freddy’s loans now remains a mystery. The company’s archives—now kept by a company called Loan Science—show that his loans were scooped up by the Swiss bank UBS in October 2008. But the entire portfolio changed hands again in 2009. “That 2009 sale was private, it was bound by a confidentiality agreement and, therefore, we’re not in a position to disclose the identity of the purchaser,” wrote a UBS spokesman in an email.

One possibility: Freddy’s loan may have been among those acquired by the Swiss National Bank, Switzerland’s equivalent of the U.S. Federal Reserve, when it bailed out UBS. (See our sidebar.)

Reynoso and his lawyer don’t even know exactly how much he now owes, but it appears to be well into the six figures. The loan that Bank of America originated is clear: At the end of March, the balance was around $7,400, according to Mike Reiber, a spokesman for PHEAA, a company that once serviced that loan. (With the loan in default, it now resides with First Marblehead, Reiber said.) But the other, much larger portion of Reynoso’s debt remains murky. A 2009 lending disclosure document indicates that through Education Finance Partners, UBS extended nearly $160,000 in credit to Freddy Reynoso, and projected that if he made all payments as scheduled, the loan for his music education would end up costing him $279,000.

Seemingly the only party who knows—and is obligated to tell Reynoso—about this debt is the servicer, ACS Education Services.

Citing privacy reasons, ACS declined to disclose any specifics about the loans to ProPublica, even with Reynoso’s full consent. Three weeks ago, Francisco Reynoso himself sent a letter to ACS asking who currently holds the loans, but he has received no response.

ACS is a subsidiary of Xerox, so ProPublica put in several calls there. Given more than a full week to respond, Xerox’s corporate communications team has yet to provide a response to queries about when Reynoso can expect basic information about his son’s loans, including the amount he owes and the name of the company that now owns the debt.

Even with the help of a lawyer, Reynoso’s options are limited. Unlike most kinds of debt, private student loans are not dischargeable through bankruptcy, though Sen. Dick Durbin, D-Ill., is leading an effort to change that. So for the time being, Reynoso’s hope hinges on a narrow provision in the bankruptcy code called a hardship discharge. The bar for proving “undue hardship” is high, but Reynoso still hopes for the best as he waits for a ruling from the bankruptcy judge. As he puts it: “I’m in the hands of God.”