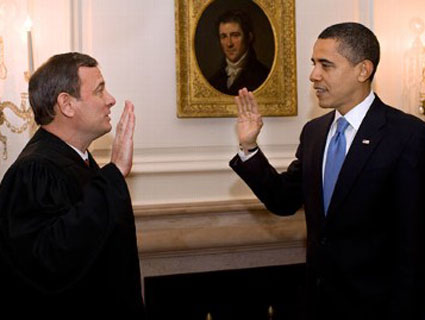 Tea party activists are understandably apoplectic over Thursday’s Supreme Court ruling upholding President Obama’s signature health care reform law. But in many ways, angry conservatives shouldn’t be surprised by their loss. After all, they lost the fight over the bill back in 2010 to begin with. But more importantly, tea party activists, and radical conservative ideologues only really prevail in political fights when their interests align with those of corporate America. That’s true even at the Supreme Court. And in this case, corporate America was very much on the other side of the fight.

When Obama and congressional Democrats cobbled together the deal to pass the Affordable Care Act, they were largely successful in getting all of the deep-pocketed key players on board, offering various sweeteners to get the pharmaceutical, medical and health insurance industries to back the bill. That’s probably the only reason that the law passed in the first place. Healthcare reform, in turned out, could be good for business (witness the soaring stock prices of health care stocks after the Supreme Court’s decision even as other stocks were falling). Conservatives seem to have forgotten that part of the story when they took the law to the Supreme Court and challenged the insurance mandate—and that’s likely why they lost, too.

The conservative challenges to the Affordable Care Act are notable for how little support they’ve received from deep-pocketed industry players. America’s Health Insurance Plans (AHIP), the health insurance industry’s main lobbying arm, filed a brief with the Supreme Court, but it only argued that if the court did find the mandate unconstitutional, it should overturn the rest of the law as well.

The health insurance industry isn’t crazy about lots of provisions in Obamacare, including requirements that insurance companies cover everyone and that they stop dropping or excluding people because of preexisting conditions. Those things on their own would undoubtedly cause insurance companies to lose money. But those losses are more than compensated for by the individual mandate, which will bring in millions of new customers (many of whom will be young and healthy) whose premiums will help subsidize those of the sicker people the companies are forced to cover under the ACA. Basically, AHIP and its allies wanted to make sure that if they had to cover sick people, they also got the mandate. AHIP’s Supreme Court brief was no ringing endorsement of reform, but it wasn’t the full-throated opposition that conservatives would have liked to see.

Likewise, the ever-powerful US Chamber of Commerce, whose legal eagles are in the midst of one of the most amazing runs of success in Supreme Court history, did not oppose the law. Like the insurance industry, the Chamber did not take a position on the individual mandate or other parts of the law. Instead, it merely urged to court to act quickly to settle the outstanding legal issues. Like AHIP, the Chamber argued that the fate of the mandate should be bound to that of the other insurance reforms—if one went, the other would have to be scrapped, too. Other business groups also avoided the fight or signed up for the other side. The hospital industry supported upholding the law’s Medicaid expansion. The pharmaceutical industry’s lobbying arm, PhRMA, which timidly supported the original bill, didn’t weigh in at all.

So business wasn’t really a part of the anti-Obamacare coalition. Instead, the primary legal challenges to the ACA came from states headed by right-wing (and often unpopular) ideological governors, and the states’ outside support came from equally ideological advocacy organizations, such as the Family Research Council and fringe physicians’ groups. But their lack of support from the business community is notable, and it may be the one reason why Justice John Roberts decided the case the way he did.

Roberts is conservative, but not in the same way as Justices Antonin Scalia or Clarence Thomas. He’s more of a white-shoe law firm kind of guy, which is fitting for someone who was a partner at the corporate law firm Hogan & Hartson (now Hogan Lovells). As such, he’s got some of the pragmatism of a corporate lawyer, and his sympathy for the business community’s arguments has been plain from the time he was first confirmed. (See: Citizens United.) If the US Chamber of Commerce didn’t see fit to argue that the ACA was unconstitutional, it’s not surprising that Roberts didn’t, either.