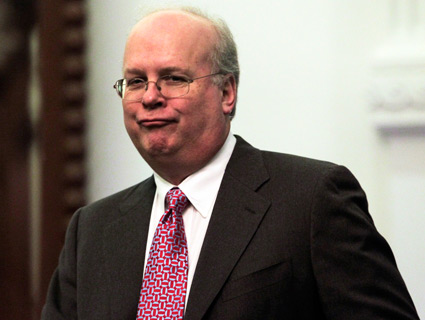 Scene: A wood-paneled office. A framed autographed photo of George W. Bush hangs on the wall. The oak desk is immaculate. Only an inbox, an outbox, and a desk blotter sit on it. A Remington sculpture—a cowboy on a bucking horse—rests on a side table. A seventy-something man of more-than-average girth is at the desk, well ensconced in a leather high-back chair.

Woman on the Intercom: Mr. Karl Rove is on the line.

Venting Billionaire No. 1: Put him through, Doris.

Woman on the Intercom: Speaker?

Rove: See the news this morning?

VB1: You know why he wants to do that?

VB1: So federal agents can look at the books of every company in the United States. That’s control. “We’re just looking for salary information,” they’ll say. Yeah, right.

VB1: No, I know, Karl. Wisconsin. Just yanking yours, Karl.

Rove: What did I tell you, sir?

VB1: I bet Charles and David are pleased.

VB1: A good day for America, that’s for sure.

VB1: I’m not senile…yet. But don’t ask Charlotte, she thinks—

Rove: I told you you could get in on the ground floor of Wisconsin. This could have been your win.

VB1: They managed fine without me.

Rove: True enough, sir. But there are 49 other states…and an election this November.

VB1: Think I heard about that, Karl. Thanks for the reminder.

Rove: I know how you feel about the president—

Rove: About Obama. And now you can see how this all works. That it does work. I know you had some reservations—

VB1: About giving you two million dollars to hand out to slick consultants to do goddamn-knows-what. Sure as fuck do.

Rove: Well, here’s the proof. Look at what you could have gotten for your money in Wisconsin. The unions were slaughtered. This may be it for them. I can’t see how they recover. I already got the data, more than a third of voters in union households voted for Walker. They couldn’t even hold their own people. They’re screwed. This is the biggest loss for the left in decades. I don’t even know if they’re smart enough to realize it. I’ve looked at the exit polls. It doesn’t matter what the White House and those assholes on MSNBC say, this is trouble for Obama. And, you know, Walker gets most of the credit. But it was guys like you—but, uh, not you—who made this happen.

Rove: Imagine if you could go down to the club today and say, “You know those ads in Wisconsin that fucked the unions? Those were my ads.”

Rove: That’s right, sir. No one would let you.

Rove: I know that despite your strong and obvious feelings of patriotism, you were reluctant in the past…

VB1: Damn right. Who needs to get mixed up in fucking politics, get your name out there? I like my privacy.

Rove: But I know you share my belief—and that of our friends—that we can’t afford four more years of this…guy. And that, as you can see now, this is the time to strike. We can take him down and his entire side. Look, it’s not just about…him. We can do what we did in Wisconsin in every swing state. But we can also do it in the Senate and House races we need to win to get a full majority in Congress. And look at the folks who helped out Walker—Bob, Diane, Dick. What crap did they get? Not much. But, you know, there are ways to keep your name completely out of it.

Rove: Yeah, we have a way. I can have a lawyer talk to one of yours, explain it all. And it’s all fine. Legal.

VB1: Don’t want to give the IRS any reason—

Rove: There won’t be.

VB1: No sniffing around, you know.

VB1: You know, Obama has a plan to use Social Security to track who’s registered to vote and whether they vote. You know what that means, right?

Rove: I didn’t know that.

Rove: Well, if we succeed, the only Social Security he’ll have to worry about is his own check.

VB1: If he’s not impeached. You know, you can impeach an ex-president. Did you know that?

Rove: I think I did. But back to the business…the matter at hand, sir.

Rove: Well, sir, we have all sorts of different packages?

Rove: Different levels of contributions, that sort of thing. But think about this, sir. It’s the final week of the election. It’s close. Real close. North Carolina might make the difference. And that week, we blanket the state with ads saying—

Rove: Or something like that. Whatever the polling and focus groups tell us will have the greatest impact. They won’t be prepared to counter it. There won’t be any time left. They’ll complain about negative ads—and all their allies in the liberal media will cry boo-hoo about this. But that won’t stop the ads from working. He loses Ohio. He loses the election. We have a Republican president and a Republican House and Senate. And you, sir, can say, “I did that….I did that for my family. I did that for children and their children. I did that for my country.” Yes, you can.

Rove: I can be on a flight and see you tomorrow morning.