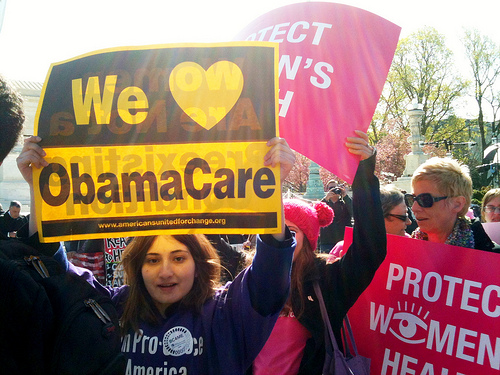 The US Supreme Court on Thursday largely upheld the Patient Protection and Affordable Care Act, the centerpiece of President Obama’s first term in office. Chief Justice John Roberts, a conservative appointed by George W. Bush, joined with the high court’s four liberals and penned the majority opinion. In their dissent, the court’s four other conservative justices said they would have struck down the entire law.

So what does the court’s ruling mean for regular Americans?

After the ACA’s passage in 2010, Mother Jones‘ Nick Baumann listed 10 ways Obama’s signature health care law will impact the healthy and sick, young and old, rich and poor. Here they are:

1) Insurance companies can no longer impose lifetime coverage limits on your insurance. Never again will you face the risk of getting really sick and then, a few months in, having your insurer tell you, “Sorry, you’ve ‘run out’ of coverage.” Almost everyone I’ve met knows someone who had insurance but got really, really sick (or had a kid get really sick) and ran into a lifetime cap.

4) A special, temporary program will help adults with preexisting conditions get coverage. It expires in 2014, when the health insurance exchanges—basically big “pools” of businesses and individuals—come on-line. That’s when all insurers will have to cover everyone, preexisting condition or not.

5) Insurance companies can’t drop you when you get sick, either—this plan means the end of “rescissions.”

6) You can stay on your parents’ insurance until you’re 26.

7) Seniors get $250 towards closing the “doughnut hole” in their prescription drug coverage. Currently, prescription drug coverage ends once you’ve spent $2,700 on drugs and it doesn’t kick in again until you’ve spent nearly $6,200. James Ridgeway wrote about the problems with the doughnut hole for Mother Jones in the September/October 2008 issue. Eventually, the health care reform bill will close the donut hole entirely. The AARP has more on immediate health care benefits for seniors. Next year (i.e., in nine months), 50 percent of the doughnut hole will be covered.

8) Medicare’s preventive benefits now come with a free visit with your primary care doctor every year to plan out your prevention services. And there are no more co-pays for preventative services in Medicare.

9) This is a big one: Small businesses get big tax credits—up to 50 percent of premium costs—for offering health insurance to their workers.

10) Insurers with unusually high administrative costs have to offer rebates to their customers, and every insurance company has to reveal how much it spends on overhead.

UPDATE: Here’s one more big benefit we’ve found out about since the ACA passed:

11) Free birth control and other preventative services for women, unless you work for a faith-based organization that opposes birth control.

Hungry for more? Read Adam Serwer’s breakdown of what the Supreme Court’s decision means and what comes next.