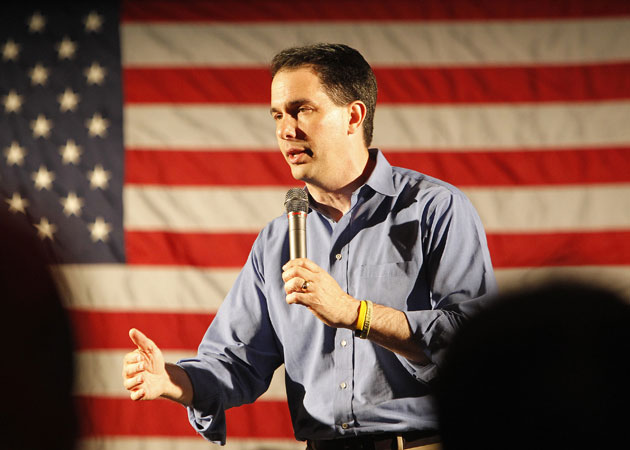 After 16 months of turmoil and the most expensive gubernatorial election in Wisconsin history, Gov. Scott Walker on Tuesday claimed a surprisingly quick and decisive victory in Wisconsin’s recall election.

News outlets called the race for Walker before 9 p.m. local time. With 86 percent of precincts reporting, Walker led his opponent, Milwaukee Mayor Tom Barrett, 54 percent to 45 percent. Lieutenant Gov. Rebecca Kleefisch, who also faced recall, has been declared the winner of her election against Democrat Mahlon Mitchell, a firefighter and union leader. Kleefisch led Mitchell 54 percent to 46 percent with 86 percent of precincts reporting.

After congratulating Walker by phone for his win, Barrett told a ballroom of stunned supporters in downtown Milwaukee that they couldn’t give up fighting for the issues fought over in the Walker recall. “Please, please, please remain engaged, remain involved,” Barrett said. “We will continue to fight.” Mike Tate, the Democratic Party of Wisconsin’s executive director, wrote in a statement emailed to supporters that Tuesday’s results “do not stop our firm opposition to the changes sought by Scott Walker.” Tate went on, “There is no question that this is merely the beginning, not the end, of this conversation. As it continues, we must find common ground for Wisconsin to be Wisconsin again.”

Walker’s victory means he avoids becoming the third sitting governor in US history to be ousted from office via recall. Walker entered Tuesday’s election as the favorite in the race, having led Democrats in every poll conducted in 2012. RealClearPolitics’ polling average gave Walker a 6.7 percentage point lead heading into the election.

Money was a big factor—Walker enjoyed a wide advantage in campaign cash in the recall battle. Thanks to a quirk in state law that lets an official facing recall raise unlimited funds to defend him or herself, Walker out-raised Barrett by more than 7 to 1, raking in more than $30 million to Barrett’s nearly $4 million. Walker’s donors included wealthy Wisconsinites—billionaire businesswoman Diane Hendricks gave Walker $540,000—and heavy-hitting GOP donors outside of Wisconsin, such as Houston homebuilder Bob Perry and Las Vegas casino mogul Sheldon Adelson.

Republicans and conservatives will hail Walker’s win as a validation of his anti-union, tax-slashing small-government agenda. Tea partiers, who rallied around Walker in his 2010 campaign and again in this recall battle, have dubbed Wisconsin “ground zero for the battle against Obama’s liberal agenda.” Tuesday’s results will provide a big lift to the Walker faithful in their fight against not just state Democrats but also against President Barack Obama and the policies of the Democratic Party.

Democrats and labor unions, meanwhile, have suffered a gutting loss. Since February 2011, public- and private-sector unions poured tens of millions of dollars into organizing, voter education, and a handful of elections in Wisconsin. National Democrats were initially hesitant to invest heavily in the Walker recall, but ended up investing millions in the effort to unseat Walker. Former President Bill Clinton flew into Wisconsin to campaign with Barrett last Friday. And state Democrats have fought Walker every step of the way since he took office in January of last year.

Walker’s win will reverberate on the national stage. It might also persuade Mitt Romney’s campaign to invest more heavily in the state in the hope of flipping it red for the first time since Ronald Reagan won the state in 1984. Romney called Walker Tuesday night to congratulate him on his victory, and on Twitter, Romney wrote, “Tonight’s results will echo beyond the borders of Wisconsin.”

Tripp Wellde, the Obama campaign’s Wisconsin director, said in a statement Tuesday night: “While tonight’s outcome was not what we had hoped for, no one can dispute the strong message sent to Governor Walker. Hundreds of thousands of Wisconsinites from all walks of life took a stand against the politics of division and against the flood of secret and corporate money spent on behalf of Scott Walker, which amounted to a massive spending gap of more than $31 million to $4 million.”