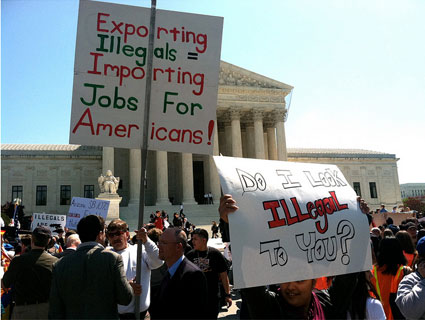 Several parts of Arizona’s harsh anti-illegal immigration law, which sought to purge the state of unauthorized immigrants through a policy of “attrition through enforcement,” were blocked Monday by a Supreme Court decision that invalidated three of the law’s four main provisions but let stand—for now—the part of the law that allows police to stop anyone they suspect or being in the country illegally and request proof of their status. The Arizona law had set off a burst of copycat legislation in other conservative states, some even more severe than the original. But with this decision, the laws spawned elsewhere are now susceptible to challenge—and the right’s get-tough approach to immigration is at risk.

“The court resoundingly rejected the argument that Arizona had the right to impose its own criminal penalties for being undocumented in [Arizona] or trying to seek work in the state,” says Elizabeth Wydra, chief counsel at the liberal Constitutional Accountability Center. “I think that is very encouraging to challengers of other state laws.”

The Obama administration had argued that the Arizona law interfered with the federal government’s authority to set immigration policy, while the law’s supporters claimed that it in fact complemented federal immigration law. In a 5-to-3 decision, with Chief Justice John Roberts and Justice Anthony Kennedy joining the Democratic appointed justices, the court agreed in all but one instance with the Obama administration. (Justice Elena Kagan recused herself because of her prior role as President Obama’s solicitor general.) In response to the Obama administration’s challenge, the Supreme Court blocked the parts of the law making it a crime for undocumented immigrants to work without authorization and requiring immigrants to carry proof of their status. Also struck down was a provision allowing police to arrest without a warrant anyone suspected of committing an offense that might lead to deportation.

The battle over Arizona’s “papers, please” provision isn’t over. “The court took some of the edge off Arizona’s law,” Wydra says. “But in keeping the ‘show us your papers’ provision, the court allows Arizona to pursue its policy of ‘attrition through enforcement,’ or ‘self-deportation.'” That means there’s enough left of SB 1070 to make life hard for the state’s Latino residents—and anyone else who “looks” to the cops like they’re in the country illegally.

In the opinion for the majority, Justice Kennedy wrote that it would be “improper” to block enforcement of this provision “before the state courts had an opportunity to construe it and without some showing that enforcement of the provision in fact conflicts with federal immigration law and its objectives.” In plain English, that means that it might be unconstitutional, but the high court wants to wait and see how this part of the law is enforced.

During oral arguments, none of the justices were as hostile to the government’s case as Justice Antonin Scalia. He accused the Obama administration of refusing to repel an “invasion” of undocumented immigrants and analogized undocumented immigrants to armed thieves, summarizing the administration’s immigration policy as, “we may only want to go after the professional bank robbers.” In a dissenting opinion, Scalia condemned the administration’s alleged “policy choice of lax federal enforcement”—as if ignoring Obama’s record number of deportations.

While judicial “empathy” became a conservative epithet during Justice Sonia Sotomayor’s confirmation hearings, Scalia offered plenty of support for the feelings held by supporters of the Arizona law. “As is often the case, discussion of the dry legalities that are the proper object of our attention suppresses the very human realities that gave rise to the suit,” Scalia wrote. “[Arizona’s] citizens feel themselves under siege by large numbers of illegal immigrants who invade their property, strain their social services, and even place their lives in jeopardy.” He didn’t have any kind words to say about the “human realities” of those targeted by the Arizona law.

Scalia even spared some outrage for the recent Department of Homeland Security directive that shielded certain unauthorized immigrants from deportation, saying it “boggled the mind” that the administration would do so as it sought to block Arizona from instituting its own self-deportation regime.

Second only to the health care reform ruling expected later this week, the court’s decision on the Arizona law has the potential to influence the outcome of the 2012 presidential election. The Republican shift towards near-uniform support for hardline immigration policies has pushed Latino voters toward the Democratic Party. Yet voter participation rates for Latinos still lag behind those of other groups. The mixed results from the court, however, make it even more difficult to handicap the political consequences. The fight over harsh anti-illegal immigration policies in the states is just beginning.