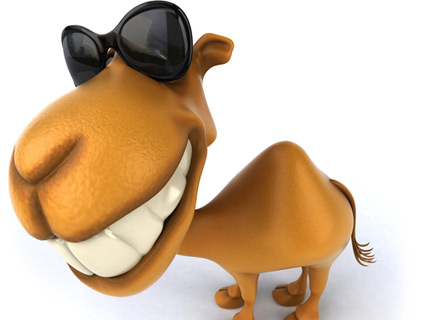 Al-Shabaab—the population-terrorizing Al Qaeda-linked Islamist group in Somalia that has carried out deadly bombings in Uganda and elsewhere—has an odd sense of humor. As BBC News reported on Monday:

The bounty is the terror group’s sardonic comeback to the US government offering $7 million last week for information leading to Ahmed Abdi aw-Mohamud Godane, an al-Shabaab co-founder and faction commander. The State Department has recently been hard at work backing at a UN-supervised peace plan for Somalia. The East African nation is the site of a rapidly expanded US-led drone war against AQ affiliates, and the Obama administration also has a habit of killing the country’s pirates.

Typically, a male brown camel can be worth up to $7,000; females are worth up to $20,000. That means Al-Shabaab’s mock offer for information on the president’s “hideout” equals between $70,000 and $200,000—which is $6,800,000 less than what the United States is currently offering for one al-Shabaab leader. (Just for a frame of reference, an Australian insurance firm put Barack Obama’s worth at $51,000 in crocodile attack insurance back in November.)

Here are a few other things you can get for $200K:

As for the bounty on Secretary Clinton’s head, MyPetChicken.com puts the price of a hen at up to $25. A rooster will cost you roughly $3.00. That comes to a grand total of $280 for information leading to the capture of Hillary Rodham Clinton.