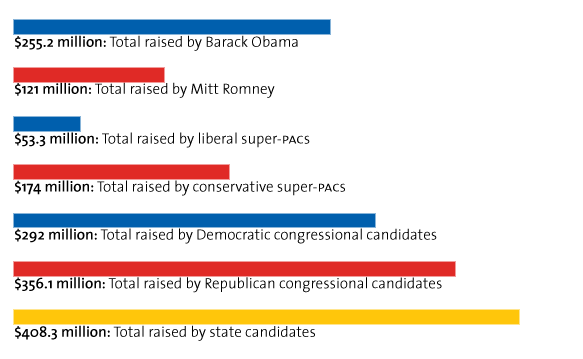 QUOTE of the week

“I am going to bundle every penny I can bundle.”
—Rodger Young, a Romney donor-turned-bundler, speaking to ABC News at Romney’s Republicanpalooza retreat last weekend. Hundreds of Romney backers attended, but who they were may be hard to ascertain: Romney has only disclosed his bundlers who are registered lobbyists, as required by law. (President Obama has raised at least $106 million from bundlers; Romney’s raised at least $3 million.)


chart of the week

This week we launched our interactive map of the dark-money universe, which charts the biggest and most notable super-PACs and dark-money groups trying to influence the 2012 election, and keeps an eye on some of their top moneymakers. Bookmark the page—we’ll be adding regular updates over the next few months. 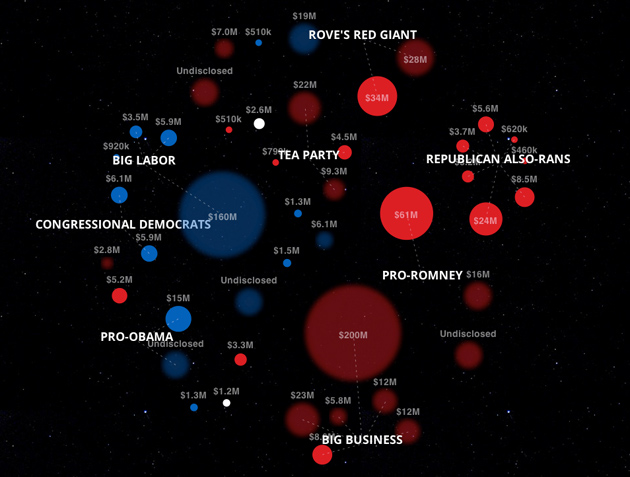 $9 million: The amount the conservative dark-money outfit Americans for Prosperity plans to spend on ads attacking Obamacare now that the Supreme Court has upheld the law. “The Supreme Court’s ruled and President Obama’s now given us one of the biggest tax increases in history,” the group’s president, told Politico. “We’re going to remind people of the disastrous components of this legislation.” Meanwhile, the Romney campaign claimed it’s already raised upward of $2 million off the court’s decision.


attack ad of the week

The Obama campaign and the pro-Obama super-PAC Priorities USA Action took advantage of a lengthy Washington Post report that Bain Capital “invested in a series of firms that specialized in relocating jobs done by American workers to new facilities in low-wage countries like China and India” during Mitt Romney’s 15 years running the company. Romney campaign officials met with top Post editors to demand a retraction; they were denied. Priorities USA Action, which is run by former Obama press secretary Bill Burton, has released a “super memo” using the Post story to hit Romney. The president’s reelection campaign (which can’t legally coordinate with the super-PAC) released this ad deeming Romney “outsourcer-in-chief”:

• New York Attorney General Coming After US Chamber Affiliate: Eric Schneiderman is probing whether a foundation broke the law by sending $18 million to the US Chamber of Commerce.
• IRS Takes a Closer Look at Karl Rove’s Dark-Money Group: Is Crossroads GPS bending tax rules? We may not find out until after the election is long over.
• Who’s Paying for $6 Million of New Anti-Obamacare Ads?: A conservative women’s group is spending millions on dark-money TV ads bashing health care reform—and hasn’t said where it got the dough.
• In New Decision, Supreme Court Still Loves Citizens United: A Montana case gave the justices a chance to reconsider their decision allowing unlimited corporate spending in elections.
• Anatomy of a Non-Attack Attack Ad: An inside glimpse at the thinking—and chutzpah—behind a dark-money group’s election ads.