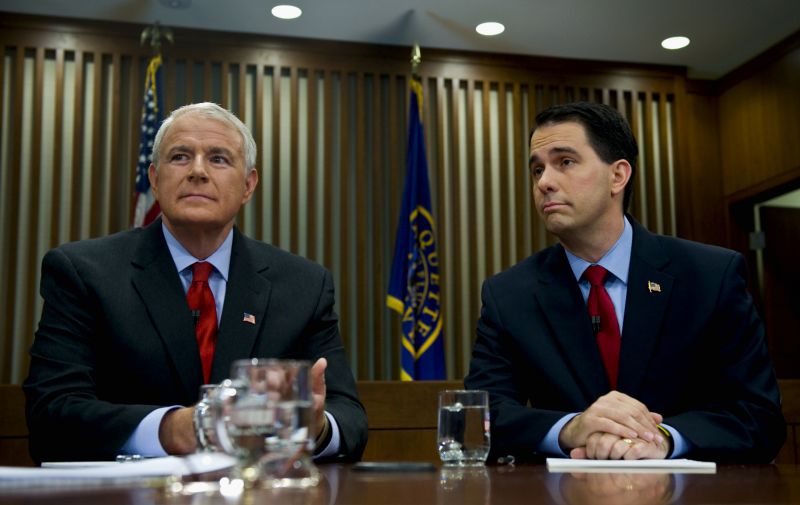 After avoiding confrontation in his first debate with Milwaukee Mayor Tom Barrett, Gov. Scott Walker punched back hard and often on Thursday night in second and final debate of Wisconsin’s bruising, cash-soaked recall campaign. Walker ripped Barrett as weak on crime and suggested he was clueless when it came to a plan to jump-start Wisconsin’s economy. Barrett, meanwhile, kept up his attacks on Walker’s integrity by highlighting the so-called John Doe investigation that has resulted in criminal charges against three former Walker aides, a Walker campaign donor, and a political appointee.

“I have a police department that arrests felons. He has a practice of hiring them,” Barrett said in one of the night’s most memorable lines.

The debate, ably moderated by Milwaukee broadcast journalist Mike Gousha, veered from the investigation swirling around Walker to job creation in Wisconsin to right-to-work legislation to the impacts of Walker’s Act 10 legislation that curbed collective bargaining rights for most public-sector unions. Both candidates sounded sharp and on message, yet it’s unclear if either said anything groundshaking enough to win over undecided voters.

Walker repeatedly said that his economic reforms, including his anti-union legislation, were benefitting Wisconsin’s schools and businesses. He also stood by the newer set of jobs figures he released, claiming they showed progress in the state. “I realize this undermines the whole focal point of your ads for the last few months, but the facts are the facts,” Walker said. “Wisconsin gained jobs in 2012, we gained jobs in 2011.”

Barrett questioned the accuracy of the numbers, and again used them to attack Walker’s integrity. The Milwaukee mayor also highlighted Walker’s comment to a wealthy donor that he would “divide and conquer” labor unions in Wisconsin.

Barrett also took a stand on the issue of money in politics in Wisconsin. More than $3 of every $5 dollars raised by Walker for the recall has come from out-of-state donors. “People fundamentally know there’s something wrong when you have a sitting governor raise, 60, 65 percent of their money from out of state,” Barrett said, adding that Walker’s donor “found the place where they can push through the tea party agenda.”

In the end, Barrett returned to the theme of integrity as the reason to choose him on Tuesday. “This is an important election,” he said. “It’s an election about trust. And I’m asking you to trust me.”

Walker, repeating his theme of moving Wisconsin forward, said he’s the guy with the “courage to take on the tough challenges.” He added, “I want to make sure they inherit a Wisconsin at least as great as the Wisconsin we inherited.”