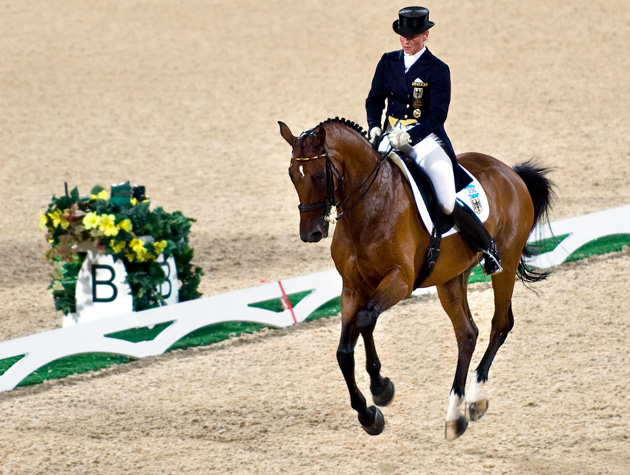 This isn’t Rafalca, but it’s the sort of anti-gravity trick she’ll have to do in London. Flickr/cmaccubbinMitt Romney has an Olympic athlete in his family. It has four legs and gave Romney a $77,000 write-off on his 2010 taxes. You may have heard about Rafalca, the Romney-owned dressage horse that’s going for the gold in London next month. But do you really know Rafalca? From “hippotherapy” to hiring immigrant labor to hot political ads, there’s a lot to learn, and we’ve gathered the essentials here for you. (Got even more questions? Leave them in the comments, and we’ll answer the best ones below.)

At 15, Rafalca is older than a lot of Olympic gymnasts, but roughly average for a world-class dressage horse (although they’re broken in at a young age). She’s an Oldenburg mare, historically bred for military and carriage work, and now used for jumping and showing. You can get one for as little as $7,500, though it probably won’t make the Olympics.

When is she competing?

Thursday and Friday, Aug. 2 and 3, when the “Grand Prix” individual dressage competition kicks off. The BBC has up-to-date coverage here.

The term that gets thrown around a lot by media folks is “horse ballet.” But it’s a little more than that; there aren’t any judges docking a prima ballerina for shortening her plié in The Nutcracker. Basically, in dressage, the dandily coiffed horse and top-hat-wearing rider negotiate a set of complex choreographed steps and jumps. In the Olympics, this culminates in a “Grand Prix Freestyle” set to music, and “when it works, the result is magic,” according to the International Olympic Committee. (Apparently, said “magic” involves making the Carpenters sexy again.)

That’s a far cry from the sport’s martial beginnings, designed to keep war horses in top shape for combat. Prior to the Helsinki Olympics in 1952, competitive dressage was an exclusively military event, performed by all-male uniformed cavalry officers (and, of course, their trusty steeds).

So, this is another rich-people deal, right?

Participating in dressage isn’t cheap; the New York Times describes it as “a sport of six-figure horses and $1,000 saddles.” Ann and Mitt Romney, who are technically co-owners of Rafalca (and three other dressage horses), took a $77,000 loss on their 2010 taxes for Rafalca’s care, though they didn’t deduct that entire amount… yet. It’s a complicated case, which is par for the course when your tax return is 203 pages long. 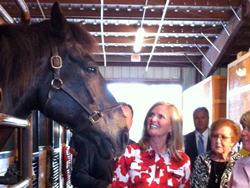 Is this just an expensive hobby for Ann Romney?

No. Ann Romney is quite an accomplished rider, having placed at a couple of good-sized national amateur dressage competitions. Moreover, she has long said that she began riding as a form of therapy to stem the effects of her multiple sclerosis, an inflammatory nervous-system disorder that can immobilize sufferers. “My horses rejuvenate me like you can’t believe,” she has said. “They give me balance. They give me energy. I think it’s because I love them so much.”

Yes. Experts call it hippotherapy—not because the horse or the rider is fat, but because “hippo” is the Greek root for “horse.” (Incidentally, hippopotamuses are “river horses,” though it’s probably best not to try breaking one in with a saddle.) In 1952, the first year civilians were allowed to enter horse events at the Olympics, the silver medal in dressage went to Denmark’s Lis Hartel, a polio victim who needed help getting on and off the horse and credited the sport with restoring her mobility.

Today, the American Hippotherapy Association, or AHA, sets rigorous standards for medical professionals who guide patients through horse therapy. The National MS Society touts hippotherapy as an effective sport for MS sufferers, along with skiing, tandem bicycling, and line dancing. The therapy apparently carries some risks, though: “Occasionally, a rider with MS may appear euphoric, or begin to lack good judgment where
physical abilities are concerned,” one article warns.

Does Rafalca have a future in politics?

Maybe. When the Democratic National Committee released two web ads starring Rafalca and her twinkle-toes, titled “Mitt: Dancing Around the Issues” (see one of them below), conservatives charged Democrats with making light of Ann Romney’s health issues, and the DNC quickly apologized. “We have no plans to invoke the horse any further, to avoid misinterpretation,” a Democratic spokesman said.

But that hasn’t stopped progressive soft money groups from making the mare an issue: Both MoveOn.Org and the labor super PAC Workers’ Voice have said they’ll use the horse in anti-Romney ads.

What kind of a track record do the Romneys have with animals?

Not as good as Newt Gingrich. You’ve heard of Seamus the Irish setter, right? How about Marco Polo the horse?

What are Rafalca’s chances of medaling in London?

Don’t bet on it just yet. She got there with a third place showing in this year’s United States Equestrian Federation National Dressage Championships, but she may be no match for this gay Dutchman (or his former steed, who’s famed for having “the most wanted sperm in horse breeding“).

Well, now that you mention it: The horse’s rider, hired by the Romneys, is a German immigrant in his first Olympic competition. “He came over here with two empty hands,” a US equestrian official told the New York Times. “He had a lucky break to get to know the Romneys.”

Rider Jan Ebeling also got a six-figure loan from the Romneys to open up The Acres, a small horse ranch outside L.A. where Ann Romney first rode horses for therapy and where “the Romneys use a Mediterranean-style guesthouse as a getaway.” Ebeling’s wife, Amy, is co-owner of Rafalca with the Romneys. (A third co-owner, Beth Meyer, is a longtime Romney friend.)

“When I was nearly incapacitated with my MS, Jan was one of the people who helped me the most,” Ann Romney told dressage-news.com. But as close as Ann Romney and the Ebelings are—they’ve even been sued together—it’s not always smooth sailing. Asked in a legal deposition whether she ever chafed at Jan Ebeling’s riding instructions, she answered: “I think that is not a fair question because we all get upset at certain times with anybody that is—you know, especially a German.”

How did Rafalca get to London?

By Fedex air, according to the mare’s rider, Jan Ebeling. Despite persistent rumors, we’re almost certain she didn’t get there like this.

Am I un-American if I don’t root for Rafalca?

According to the New Yorker, yes.

Current TV crunched the numbers to see how Rafalca’s day-to-day expenses compared to those of the average American family. The results, in graphic form:

Making hay: courtesy Current TVCan I connect with Rafalca on the interwebs?

Anything else I should know?

Just that dressage is kinda big pimpin’. Our thanks to Deadspin for this mashup video: