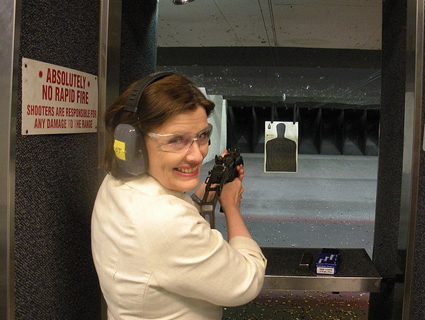 When the caliphate comes to Middle Tennessee, Lou Ann Zelenik will be ready.

During her first run for Congress in 2010, Zelenik, a Republican county commissioner and business owner, focused like a laser on what what she considered to be the greatest crisis facing her community: the impending Islamist takeover of the Bible Belt. Zelenik blasted her primary opponent, then-state Sen. Diane Black, for supporting the construction of a new Islamic community center in Murfreesboro, a small city about 45 minutes east of Nashville. “This isn’t a mosque,” Zelenik told Talking Points Memo at the time. “They’re building an Islamic center to teach Sharia law. That is what we stand in opposition to.” Black, the favorite going into Election Day, held on by 335 votes and was elected to the House that fall.

On Thursday*, Zelenik is out for revenge—and this time it’s personal. In Tennessee’s 6th District, an area so conservative local Democrats aren’t even fielding a candidate this November, Zelenik and Black are quietly waging one of the nastiest campaigns of the 2012 cycle, complete with a lawsuit, a super-PAC sugar daddy, and allegations of federal crimes.

Since losing to Black in 2010, Zelenik has ratcheted up the anti-Islam rhetoric that defined her first campaign. After the election, she founded the Tennessee Freedom Coalition, a conservative Christian organization dedicated to, among other things, educating “citizens on the realities of Sharia” and stopping “the growth of Radical Islam.” Last November, TFC held its inaugural “Constitution or Sharia?” conference, which featured luminaries like David Yerushalmi (the architect of the national movement to ban Islamic law from being applied in state courts) and the Center for Security Policy’s Frank Gaffney, who has accused anti-tax activist Grover Norquist of being allied with the Muslim Brotherhood. In May, Zelenik hosted the controversial Dutch politician Geert Wilders, who is most famous for saying “there is no such thing as ‘moderate Islam'” and arguing Muhammad was a terrorist.

Having made her name fighting the Murfreesboro Islamic center, Zelenik founded a group dedicated to educating “citizens on the realities of Sharia.”

In 2011, two state legislators who have since endorsed Zelenik introduced a bill to define Islam as treasonous. The legislation, if passed, would have effectively prohibited Muslims from practicing their religion in the state. Earlier this month, a coalition of tea party groups and county Republican committees filed a formal complaint with the state’s Republican governor, Bill Haslem, for appointing a Muslim woman to helm a state agency.

But the three-year-long fight over the Murfreesboro mosque remains Zelenik’s signature issue. When a county judge ruled this spring that construction of the mosque should be halted because the Islamic center hadn’t gone through the proper process, Zelenik declared “a victory for all Middle Tennessee who have been the victims of ‘taqqiya’ (Islamic lying for the sake of advancing Islam) during this entire process.”

Although defenders of the Islamic center, including the Department of Justice, cited the Muslim community’s First Amendment freedom to worship, Zelenik cried foul: “This was not an issue of freedom of religion,” she wrote. “Islam does not claim to be a religion, but a social and political system that intends to dominate every facet of our lives and seeks to dominate it’s host culture by any means including force and violence.” (The Justice Department later overruled the county court and mandated that the community center be allowed to open in time for Ramadan.)

In theory, not much separates Black, who was rated the most conservative member of Congress by National Journal, and Zelenik, a proud tea partier, on basic policy. Support for the Murfreesboro mosque and public professions of tolerance notwithstanding, Black has even taken the initiative in combating radical Islam herself. As a state senator, she cosponsored “Tennessee Laws for Tennessee Courts,” a law, based on Yerushalmi’s draft legislation, that was designed to protect the state from creeping Shariah. In her first term in Washington, she took the lead in repealing (or attempting to, anyway) President Barack Obama’s health care law.

But Black’s conservative voting record hasn’t satisfied her base. RedState founder Erick Erickson, who calls Black “a terrible congress critter,” has endorsed Zelenik and encouraged his readers to give to her campaign. “Here is a case…where we can pick off a terrible Republican, replace them with a better Republican, and not lose the seat,” he argued last week.

The real source of the bad blood between Zelenik and Black isn’t about policy at all. It dates back to the end of their last campaign, when Black’s husband capped off the primary victory by immediately filing a lawsuit against Zelenik and a television advertising firm she had worked with, Bright Media. Black alleged that Zelenik defamed his forensic science company, Aegis Sciences, by running campaign ads accusing his wife of steering state contracts to the firm. On the advice of her lawyer, Zelenik then backed out of a subsequent GOP “unity tour” of the district in support of Black.

“If Jim, Gary, Dave, or Kerry had won, I would be with them every step of the way on the unity tour, or whatever they needed my help on,” she said, referring to the four other GOP candidates. “THEY did not sue.” Although Bright Media settled out of court, the case was resolved in Zelenik’s favor in May. (The court ruled that Zelenik’s ads were accurate, and therefore unimpeachable. Black is appealing.) One week after the decision came down, Zelenik announced she would run against Black again.

Although she’s been outspent heavily, Zelenik has picked up support from two outside super-PACs, both of which are supported by just one donor—Andrew Miller, a health company executive, Tennessee Freedom Coalition officer, and, until June, a Zelenik campaign staffer. In early July, Miller—who the campaign says left abruptly on June 1—started his own super-PAC, Citizens 4 Ethics in Government, based out of an UPS office in a strip mall outside Nashville. The group has now spent $177,483 on independent expenditures on behalf of Zelenik, all of which has come from Miller. Another outfit, Congressional Elections PAC (which on Friday changed its name to USA PAC), has chipped in another $80,000. According to the PAC, that money also came from Miller, although he didn’t found it—it’s the creation of Texas millionaire Leo Linbeck III, best known for spearheading the anti-incumbent super-PAC Campaign for Primary Accountability. Neither Miller nor a Linbeck spokesman responded to requests for comment on Friday, but Miller bragged to USA Today that he’s already spent at least $250,000 on ads attacking Black.

The Black campaign’s response to Miller’s super-PAC spending has been to accuse Miller and Zelenik of illegally coordinating their campaign activities—a federal crime if true. “Andy Miller resigned our campaign at the end of May. He didn’t say what he was doing,” Jay Heine, Zelenik’s campaign manager, insists. (Heine went even further in an interview with the Tennessean, calling the Black campaign “delusional and paranoid” for alleging that the Zelenik campaign was coordinating with Miller.)

On one level, though, Zelenik has already won; Black has gone from a backer of tolerance to a vocal mosque skeptic. When the Department of Justice ruled in favor of the Murfreesboro mosque in July, the congresswoman immediately blasted off a statement accusing the Obama administration of playing favorites, alleging that the DOJ spurns Christianity but “will meddle in a local zoning matter to promote Islam.”

The kicker: During the congressional redistricting process, the Murfreesboro mosque was removed from Black’s district. Heine claims that’s what caused Black’s change of heart. “I guess the difference was that now that they no longer can vote for her,” he says.

Correction: This article originally misstated the date of the Tennessee primary.