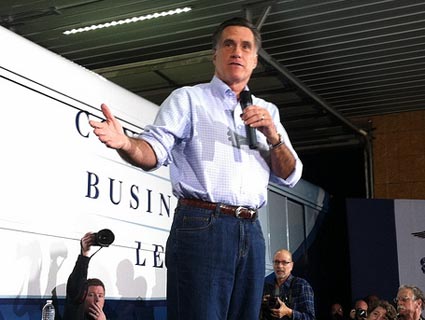 Mitt Romney is having a hard time finding businesses that didn’t get any help from the government.

Romney has been holding events and making speeches focusing on a set of remarks President Barack Obama made about how government and other people help individuals succeed. The original line Obama used was “If you were successful, somebody along the line gave you some help. There was a great teacher somewhere in your life. Somebody helped to create this unbelievable American system that we have that allowed you to thrive. Somebody invested in roads and bridges. If you’ve got a business—you didn’t build that. Somebody else made that happen.”

The Romney campaign has spent the last couple of weeks deliberately ripping Obama’s remarks earlier this month out of context, implying that Obama was disparaging business people by suggesting individual initiative has nothing to do with success. As Slate‘s Dave Weigel writes, conservatives have seized on this misinterpretation as “proof” Obama is actually a secret Marxist. The implication here is really twofold: Obama can’t fix the economy because he doesn’t understand business, and because “you didn’t build that,” Obama thinks it’s perfectly fine to take from hardworking rugged individualists (like you) and give to a bunch of freeloaders who’d rather not work for a living (like them).

The problem is that the real-world examples Romney keeps seizing on include people who got help from the government. As ABC News’ Jake Tapper reported Monday, the star of a recent Romney ad hitting Obama over “you didn’t build that” had received millions in government loans and contracts. Romney stopped in Costa Mesa, California Monday to meet with a “roundtable” of small business leaders, held in front of a sign that says “We did build it!”

Naturally, it turned out that at least two of the companies represented—Endural LLC and Philatron Wire and Cable—had received hundreds of thousands of dollars in government contracts. When Romney visited the Boston’s historic black neighborhood of Roxbury last week, Romney touted an auto repair shop, declaring that “This is not the result of government…This is the result of people who take risks, who have dreams, who build for themselves and for their families.” Except it turned out that the auto repair shop guy started out without any funds and was only able to build his business because of a bond issed by the local government.

If Romney was trying to prove that businesses only succeed on the backs of Galtian ubermensches with no external help, he’s mostly proved the opposite point. But fortunately for the Romney campaign, this particular attack benefits from a widespread American cultural delusion that success has nothing to do with structural advantages and everything to do with individual excellence, or that you can’t be proud of your accomplishments if you acknowledge the collaborative efforts of others on your behalf. So even the individuals Romney cited are indignant about the idea that they received help, despite knowing that they did. Jack Gilchrist, the businessman featured in Romney’s ad who received millions of dollars in government contracts and loans, simply rationalized it as getting “some of my tax money back.” Brian Maloney, the Roxbury businessman who started his auto repair shop with a government loan, told National Journal “We don’t need any more of government’s help. We haven’t had any.”