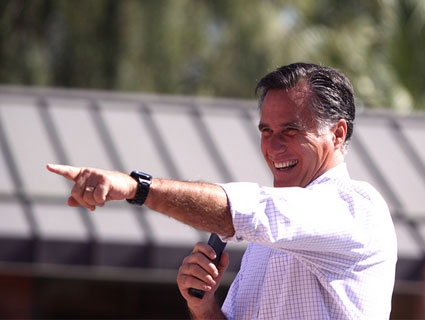 UPDATE: Romney was booed during his speech as he promised to repeal the Affordable Care Act.

Mitt Romney deserves a bit of credit for his decision to address the NAACP on Wednesday, given that he’s running against Barack Obama, the most visible symbol of the NAACP’s success. Conservatives generally view the group as a excessively partisan. But given Romney’s antagonistic relationship with the local NAACP chapter when he was governor of Massachusetts, he may receive a particularly unpleasant reception.

Leonard Alkins, the former head of the Boston NAACP, has few fond memories of Romney’s tenure. “There was no relationship between the NAACP in Boston and Gov. Mitt Romney and his administration,” Alkins says. “The only time that the NAACP had any interaction with the administration and the governor was to protest when he eliminated the affirmative action office.”

In one of his early acts as governor, Romney dumped the state’s office of affirmative action and replaced it with the office of diversity and equal opportunity. In doing so, he invalidated a half-dozen executive orders establishing affirmative action policies for women, minorities, veterans, and people with disabilities; diversity training programs; and equal-opportunity standards for state contractors. Romney’s executive order replaced all of this with what was essentially a broad—and, Alkins says, “toothless”—commitment to “diversity.”

Romney eventually appointed a diversity commission to examine his new policy. But, according to Alkins, the NAACP was excluded from the commission—until other commissioners spoke up. “He excluded the NAACP from serving on that special commission until we protested,” Alkins recalls.

Romney appointed Alkins to the commission, but the process didn’t go well. Instead of approving Romney’s policy, the commission worked to strengthen the policies he invalidated. Word leaked to the governor, Alkins says, and the co-chair of the commission, Ruth Bramson, who was also Romney’s chief human resources officer, refused to call any more meetings, thwarting the commission from voting on and issuing final recommendations. Bramson, who is now CEO of the Girl Scouts in eastern Massachusetts, refused to comment, saying she has to stay out of politics. The Romney campaign did not respond to a request for comment. But a Romney spokesman told the Bay State Guardian at the time that Bramson felt the committee’s work was done and no further meetings were necessary.

There were other problems. Alkins says Romney wasn’t aggressive enough in implementing a 2001 law designed to combat racial profiling by the police, and in 2006 the local NAACP slammed Romney for referring to a perennially unfinished public works project in Boston, the Big Dig, as a “tar baby.”  Eric Fernstrom, a top Romney adviser (then and now), claimed that Romney was unaware of the racial connotation and was merely trying to describe “a sticky situation.” Still, Romney apologized.

Will the NAACPers at this year’s convention be aware of Romney’s past run-in with their colleagues in the Bay State? Perhaps not. But none of this will make Romney’s tough task at the gathering any less tough. “Mitt Romney in my opinion was very uncomfortable in dealing with civil rights issues,” Alkins says, “and was not progressive in addressing those issues.” For some of Romney’s supporters, though, that might be a bonus.