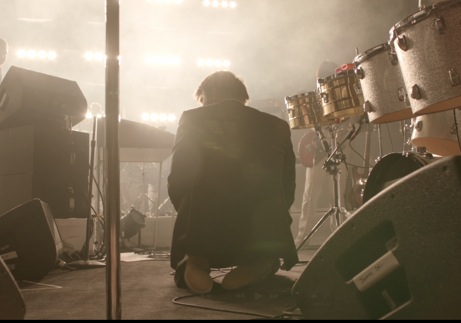 LCD Soundsystem
Shut Up and Play the Hits
Oscilloscope Laboratories

A little over a year ago, James Murphy announced that his band, the indie dance-punk group LCD Soundsystem, would play its final show at Madison Square Garden in April. For many, the announcement came out of the blue—the band had released three critically-adored, fan-beloved records, and seemed to be at the top of its game. But that was the idea: “If it’s a funeral, let’s have the best funeral ever,” reads the title card that opens Shut Up and Play the Hits, a documentary about that final show and the forty-eight hours before and after. It’s a glorified concert film, but one that aims to be something more, to varying effect.

For those of us who, say, watched the final performance alone in the wee hours of the morning on a patchy livestream thousands of miles away, and for whom never seeing the band live is a great life regret, Shut Up and Play the Hits is about as close as we’re likely to get. The film capturing this last hurrah screened in a small number of theaters around the US on July 18, in an attempt at recreating the concert vibe. As Murphy explained, “it seemed like it would be better to see this in a theater that was pretty full, and pretty full of other people who actually wanted to be there,” and while people weren’t exactly getting up and dancing in their seats, there was a lot of vigorous head-nodding. The live show emphasizes the punk aspects of the band’s sound without losing any of the dance, and footage of ecstatic concertgoers letting loose is a highlight. Getting people moving is the LCD Soundsystem ethos: Murphy says the band grew out of wanting “to play for people who were having fun.”

At one point, the band launches into “North American Scum” with the backing of Canadian-American indie-rock superstars Arcade Fire; as Murphy rambles through an introduction, vocalist Win Butler yells out the film’s title. And while the concert itself ran nearly four hours, the film instead tends towards the hits, featuring songs like “All My Friends,” “Dance Yrself Clean,” and “Losing My Edge.” But amidst all the fun, the camera keeps returning to one kid who’s crying inconsolably throughout the show. For all its insistence on having a good time, LCD Soundsystem has always been much more than a party band to fans. “Did we not just pull off a high school play at Madison Square Garden?” Murphy asks as the film opens, and it’s more apt than the comparison to a funeral in its evocation of shared experience and bittersweet triumph.

The non-concert footage is more of a mixed bag: Murphy is funny, thoughtful, and self-deprecating throughout, but many of the morning-after shots, while well-edited, are a bit too pointed, seeming like a hipster version of a “Stars! They’re Just Like Us” feature of a celebrity magazine (James Murphy walks his dog! Makes coffee! Puts on pants!). Interspersed with Murphy’s musings on stardom and coolness—”this isn’t a person whose foot would hurt because he kicked something the night before,” he says of David Bowie, and he can’t quite wrap his mind around the idea of Nick Cave checking his email—the implied parallels are sometimes overly insistent, particularly given the carefully framed, nostalgia-gauzed cinematography, which looks great but feels overdone in the age of Instagram.

In addition to footage of Murphy’s daily life, there’s also a fair amount of material from an interview with an occasionally cloying, self-describedly pretentious, but nonetheless effective Chuck Klosterman. He keeps pushing Murphy to identify LCD Soundsystem’s defining failure, and Murphy eventually concedes that it might be quitting, mentioning something Kanye West once said about fear of true stardom: “That’s the hipster justification of failure…Everyone who could be a real rock star is just fucking scared.” Murphy keeps saying he doesn’t want a rock star life—he wants kids, to take the subway, to eat wherever he wants—but he can’t help but wonder whether that’s a good enough reason to quit, and you can’t help but wonder whether he’s just kidding himself. Onstage at the Garden, he looks incredibly sad. Towards the end of the film, as he stands alone in a storage room, he starts to cry.

At one point, Murphy tells Klosterman that talking about himself in endless interviews bores him, but he still feels compelled to constantly clarify his meaning. And indeed, the entire film feels like an act of revision and revisiting—a chance for more people to see the band’s final show, yes, but more importantly, a chance to understand why the last show happened that way, and for the ragged edges of a seemingly clean break to show. In that, Shut Up and Play the Hits will feel less like an act of closure for devoted fans than the reopening of a wound.