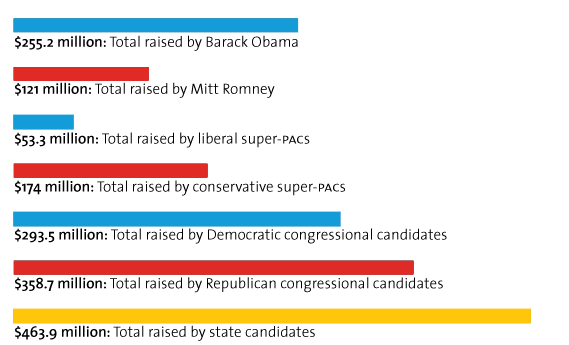 QUOTE of the week

“We openly acknowledge the irony of being a super PAC trying to address money in politics.”
—Jonathan Soros, son of billionaire philanthropist George Soros, explaining his new anti-super-PAC super-PAC, Friends of Democracy. His super-PAC joins several others formed to protest the amount of money in American politics. (The Open Society Foundations, chaired by George Soros, have supported Mother Jones’ campaign-finance reporting.)

VIDEO of the week

The Center for Public Integrity’s Michael Beckel hits the streets of DC to ask citizens what they think of super-PACs. Most were not fans (one man suggested they be “blown up”):

STAT of the week

$200,000: The amount that LPAC, a new, first-of-its-kind lesbian and women’s-rights super-PAC, reports that it raised on its first day. The group hopes to raise a modest $1 million. It’s headed by Chicago Cubs co-owner Laura Ricketts, a major bundler for President Obama. Her dad, Joe Ricketts, is also a Cubs co-owner and has his own super-PAC, the anti-Obama Ending Spending Fund.

A conservative dark-money group called American Commitment is using some of the $7 million it’s raised to attack Democrats in Ohio, Florida, Wisconsin, North Dakota, New Mexico, and Nevada. (Last month, the group spent $1 million on ads opposing EPA regulations.) American Commitment was started by Phil Kerpen, who has also worked for the Koch brothers-connected Americans for Prosperity and Club for Growth. In Ohio, the group has spent $1.2 million on ads attacking Sen. Sherrod Brown. This one accuses Brown of being “the deciding vote” in favor of Obamacare:

• Casino magnate and megadonor Sheldon Adelson gives another $1 million to a super-PAC. Sunlight Foundation
• Ross Perot’s son gives $100,000 to the pro-Romney super-PAC Restore Our Future. iWatch News
• Jamelle Bouie questions whether out-of-control fundraising will really have much of an impact on the presidential race. American Prospect