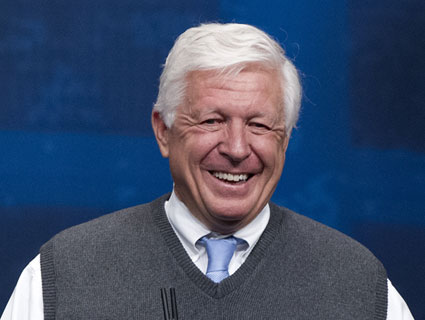 When Foster Friess began to cry, Condoleezza Rice was in the last throes of her speech at the Republican National Convention on Wednesday. The trigger was a tale about her childhood in segregated Alabama. “You might not be able to control your circumstances, but you can control your response to your circumstances,” he told me a few minutes later. “I love it.”

The GOP convention has been a magnet for the conservative megadonors—David Koch (an at-large delegate representing New York), Harold Hamm, Sheldon Adelson—who have helped redefine the campaign finance landscape in the 2012 cycle. But Friess, the Wyoming investor who last spring almost single-handedly kept Rick Santorum’s presidential campaign alive with $1.7 million in super-PAC donations, was ready to go home.

“This is a nightmare for me,” he said when I spotted him standing alone against a wall on the floor of the Tampa Bay Times Forum. “It’s too many things going on. I’ve got like four things to go to. It’s just so frustrating.” And while he loved Rice’s address, he was not sure how much more RNC speechifying he could take. “I’ve had enough speeches!”

There’s no mistaking why Friess is in such high demand in Tampa: He’s got money, and he plans to spend it. An ardent Santorum supporter during the primary, Friess has warmed to Romney, but is still less enthused by the candidate than he is by Romney’s brain trust. “I’m very, very excited about the people that are surrounding Romney, and they are the ones that deserve investment,” he told me. “So you look at the people in this room that are going to serve this administration, you know they’re honest, hard-working, decent people who love America, and so that’s something I want to continue to finance.”

According to Friess, he’s done donating directly to super-PACs, though. Instead, he’s got his sights set on nonprofits (like Crossroads GPS) that accept unlimited, anonymous contributions. “There’s probably all the different entities that present causes, whatever the cause might be, whether it’s (c)(4)s, (c)(3)s. I think the thing I’d like to do is just educate the people to some of the travesties they can end.”

Friess recoiled when I asked about President Obama’s proposal for a constitutional amendment to repeal Citizens United. And he disagreed with Sheldon Adelson’s suggestion that the increasingly disproportionate influence wielded by a handful of wealthy donors might spell trouble for the democratic process. “I think with freedom of speech it’s gonna be very hard to limit people,” he says. “The McCain-Feingold limit on how much you give a candidate didn’t really work because people found ways to get around it.” As he noted, Democrats were the first party to fully embrace 527s, the predecessor to today’s politically super-charged nonprofits. Besides, Friess said, it’s never been easier for average citizens to get their message across: “In the old days, money controlled politics. Today, information controls politics. So I think with the advent of the internet, the power of wealth has been diminished. Look up all the people you know who spent millions and millions of dollars and fell short.”

But does he believe as even some campaign finance boosters do, that social-welfare organizations like Crossroads GPS should have to disclose their donors? He thought about it for a moment and shrugged.

“Sounds good by me.”

Friess, in contrast to very private Koch brothers, is happy to chat with reporters. He told me about the convention he’s holding next week for a community of Scandinavian scholars in Madison, Wisconsin, and pulled out his cellphone to show me the crocodile he’d hunted down while he was in Tanzania recently. The crocodile’s mouth is held open by a stick; it dwarfs the man—Friess—standing next to it. “Fourteen feet!” he says. Did it have a name?