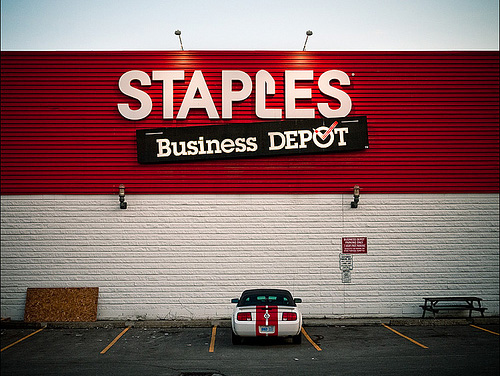 The RNC lineup for Thursday night includes Thomas Sternberg, the co-founder of Staples. Mitt Romney, who served on Staples’ board of directors in addition to investing in the company when he was at Bain Capitol, likes to tout the chain as an example of private-sector success. But as the National Employment Law Project Action Fund points out in a new report, that success has not trickled down to employees.

The report lists Staples as one of the 50 largest low-wage employers in the US. The company has continued to turn high profits even in the recession, and its CEO made $8.8 million in 2011 (which was a 40 percent drop from what he made in 2010). And yet most of its nearly 33,000 employees make less than $10 per hour. Here’s part of the graphic that goes with the report: 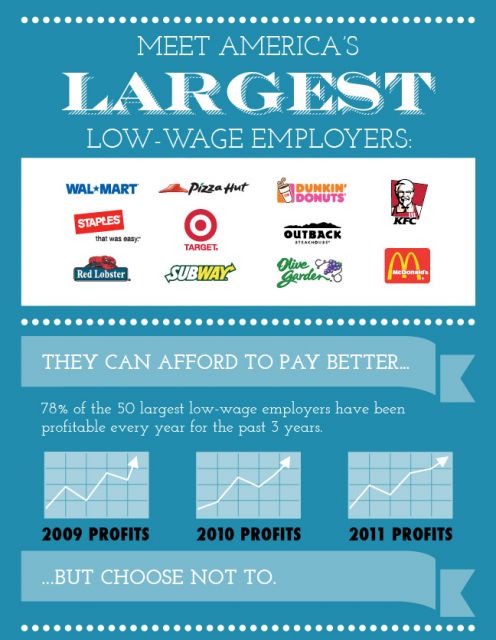 National Employment Law Project Action Fund also highlights the fact that next week’s Democratic National Convention lineup includes Jim Sinegal, the former CEO of Costco, also a hugely profitable corporation, which pays workers an average of $19 an hour and gives many of them health benefits. There are pretty clear differences between the businesses that the political parties are holding up as examples of “success” at their conventions.

That’s not, of course, to say that Costco is without its issues. The AFL-CIO and other unions have been picketing the chain, accusing it of not following its own Supplier Code of Conduct for continuing to do business with the frozen pizza manufacturer Palermo Pizza, whose workers have been on strike since June after the company refused to recognize their attempts to unionize.