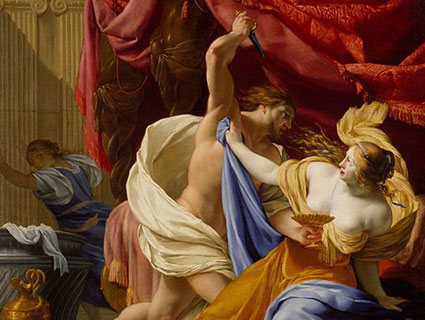 In 2 Samuel 13:1-22, Amnon rapes his half sister Tamar. Nothing happens to him. <a href="http://en.wikipedia.org/wiki/File:Rape_of_Tamar_-_Le_Seur.jpg">Eustache Le Sueur</a>/Wikipedia

Men have been in the business of deciding when it is okay and when it is not okay to rape women for thousands of years. If Missouri Rep. Todd Akin’s claim that women’s bodies magically fend off rapist sperm or the GOP’s meditation on what’s really rape sound medieval to you, that’s because they are. Check out our timeline of the male notions and common-law statutes that have defined rape over time, and see for yourself which eras the GOP’s views on rape line up with:

Property theft: The Code of Hammurabi, one of the first sets of written laws, which dates to about 1780 BC (and contains the old “eye for an eye”), defines rape of a virgin as property damage against her father. If you were married, sorry lady: You were an adulteress. Punishment? You get thrown in the river. 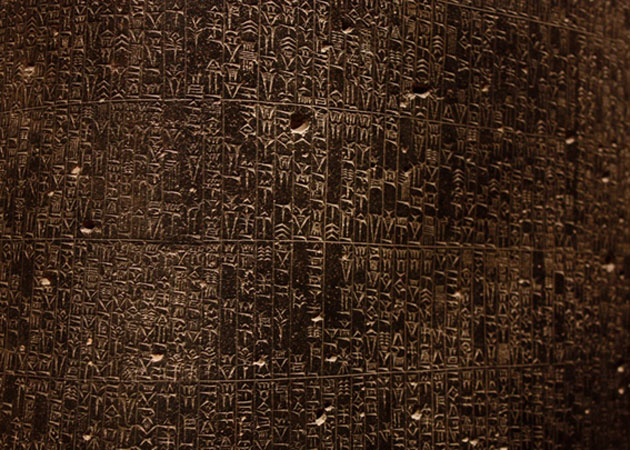 Translation: Girl, you’re screwed. Batigolix/FotopediaGod is a dude: Deuteronomy 22:28-29 says if you rape a virgin, you have to give her dad 50 shekels and take her to the altar.

Et tu, Roma? The Latin root raptus referred to the abduction of a woman against the will of whatever male controlled her life. What the abductor did with her was secondary. 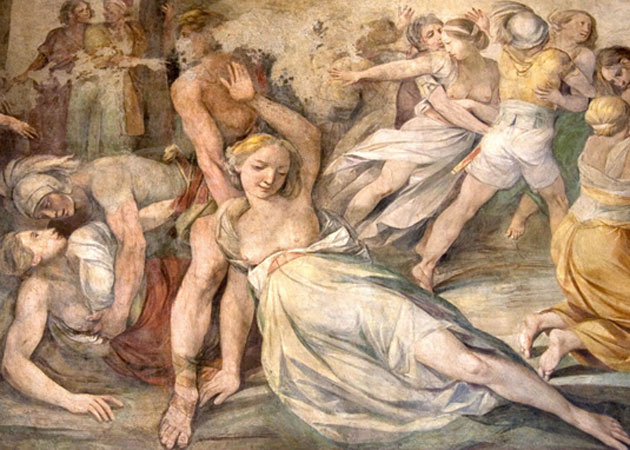 Rape of the Sabine Women, by Giuseppe Cesari. Dirk Huijssoon/FotopediaTodd Akin, 1.0: As the Guardian recently pointed out, one of the earliest British legal texts, Fleta, which was written around 1290, laid the foundation for Akin’s notion that if you get preggers, you weren’t raped: “Without a woman’s consent she could not conceive.”

(Mississippi and) The Middle Ages: During the 13th century, the severity of punishment under Saxon law varied according to the type of woman raped—whether she was a virgin, a wife, a widow, a nun, or a whore. That’s appropriately medieval. But in the United States, well into the ’90s (yes, the nineteen-nineties) some states still had laws that held statutory rape wasn’t rape if the woman was “impure“. Mississippi was the last state to ditch such a law—in 1998. 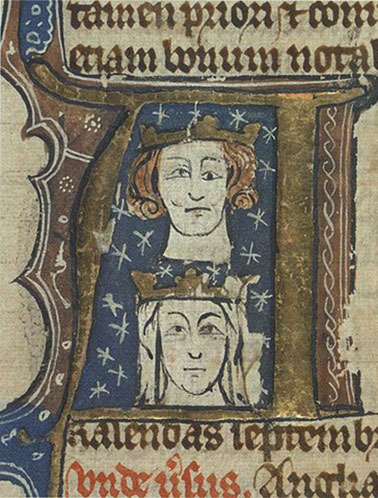 King Edward I and his wife Eleanor. From an early 14th century manuscript/Wikipedia

Pre-wave feminism: King Edward I of England was a forward-thinking chap. He enacted the landmark Statutes of Westminster at the end of the 13th century. They redefined rape as a public wrong, not just a private property battle. The legislation also cut out the virgin distinction and made consent irrelevant for girls under 12, laying the basis for the modern principle of statutory rape.

“The wife hath given up herself”: In a treatise on capital crime and punishment from around 1670, English judge and lawyer Sir Matthew Hale wrote this little gem: “[T]he husband cannot be guilty of a rape committed by himself upon his lawful wife, for by their mutual matrimonial consent and contract the wife hath given up herself in this kind unto her husband, which she cannot retract.” The law had quite a bit of traction. A man could legally rape his wife in North Carolina until 1993.

If you were brown: It didn’t count, whether you were a slave or a “savage.” And after abolition, the white legal establishment pretty much ignored rape against black women.

Rape to prove rape: Men in common law courts in the 18th and 19th centuries had a bit of trouble agreeing on how much proof a woman had to give to show she wasn’t lying. Some said the hymen had to be broken. Some said she had to provide evidence of semen. Virginity test, anyone? 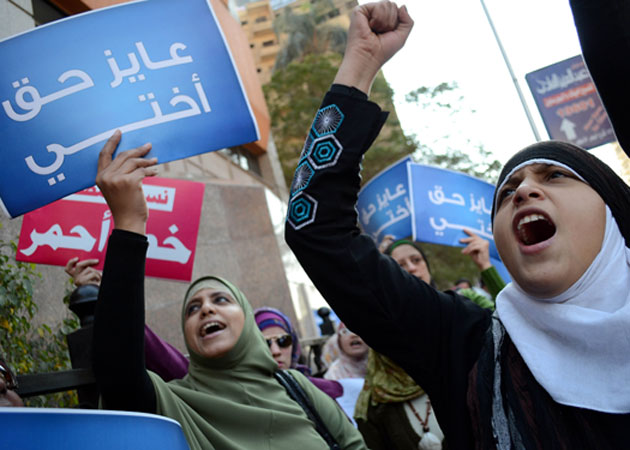 Egyptian women protest the ruling military council’s “virginity tests” in December 2011. Ayman Mose/ZUMA Press“Absolute rape,” kind of like “legitimate rape”: English physician Samuel Farr was pretty certain women couldn’t get pregnant without an orgasm. The Guardian quotes the mansplanation from his 1814 Elements of Medical Jurisprudence: “For without an excitation of lust, or the enjoyment of pleasure in the venereal act, no conception can probably take place. So that if an absolute rape were to be perpetrated, it is not likely she would become pregnant.”

You can’t thread a moving needle: Or: If you don’t squirm a lot, it’s not rape. Dr. Lawson Tait, an eminent 19th century gynecologist and medical officer who helped police with criminal investigations, was “perfectly satisfied that no man can effect a felonious purpose on a woman in possession of her sense without her consent.” Said he: “You cannot thread a moving needle.” 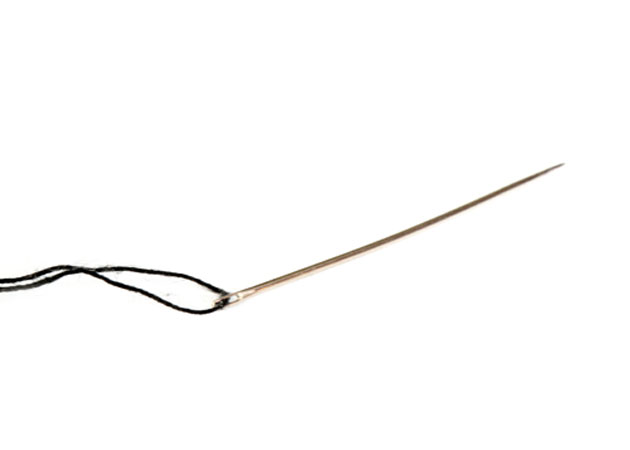 The FBI calls rape by its name: As the Post‘s Gerhart explains, the federal government used the “rather prim euphemism, ‘indecent assault,’ a phrase that seems as linguistically tortured as ‘legitimate rape,’ from the 17th century until 1929, when the FBI’s Uniform Crime Reporting Program renamed it like this: “the carnal knowledge of a female, forcibly and against her will.” That definition was still totally 17th century, btw.

Lady rules: Feminists had been fighting to raise the statutory rape age in states since the 1890s (in response, some legislators proposed raising the age of consent to 81). Nonwhite feminists had been fighting for equal treatment under the law. Second wavers gave the movement another push, demanding a range of other expansions to make the definition of rape gender neutral, include date rape, and scrap medieval marital exceptions and virginity requirements. 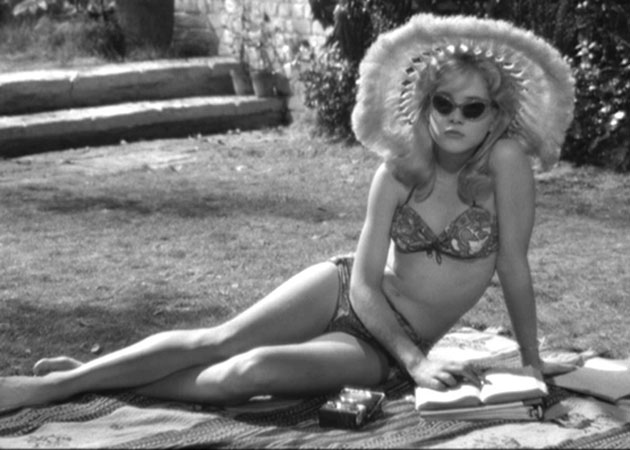 Sue Lyon in Stanley Kubrick’s 1962 Lolita. Zellaby/Fotopedia83 years later: January of 2012: that’s when the FBI decided to update its definition of forcible rape. As Kate Sheppard pointed out last year, the year 1929 “was quite a while ago—before the Great Depression, before Mickey Mouse, and before the Empire State Building, to name a few. It was also before roofies had been invented and before date or partner rape were even concepts.” The new, expanded definition includes other forms of sexual assault, other genders, and instances where the “victim is incapable of giving consent because of temporary or permanent mental or physical incapacity, including due to the influence of drugs or alcohol or because of age.”

Backward, ho!: Last year, House Republicans pushed to limit taxpayer funding of abortions by excluding non-“forcible” rapes from federal abortion funding. Their plan failed. But the Republican war on women was just starting to heat up. 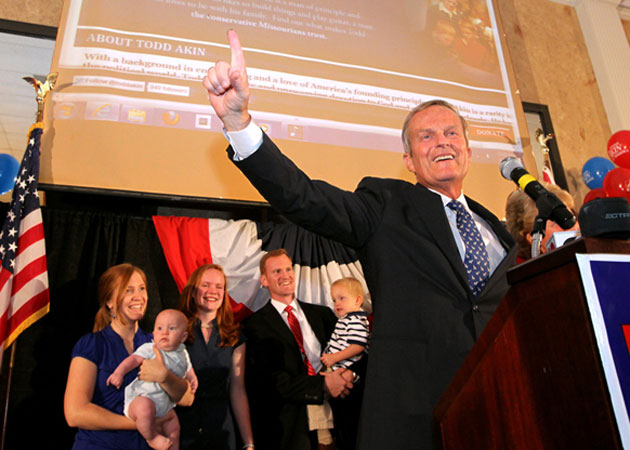 Johnny Andrews/ZUMA Press“Legitimate rape”: “If it’s a legitimate rape, the female body has ways to try to shut that whole thing down.” Or, as Urban Dictionary puts it: “Rape between one man and one woman who are not married or even acquainted; the only rape sanctioned by the Republican Party.”