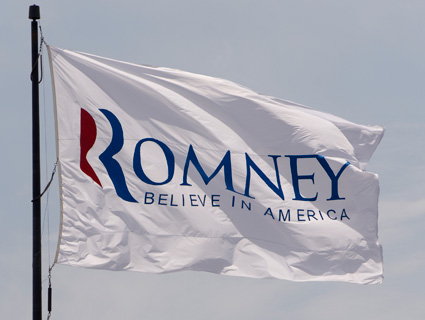 A local business flies an outsize Romney flag prior to the 2012 Republican National Convention.Brian Cahn/Zuma

With Republicans flocking—or swimming—to hurricane-threatened Tampa for the very wet coronation of moderate-no-more Mitt Romney as the tea-partyized (and Paul Ryanized) leader of the GOP, only one question hovers over the proceedings: How far will they go? That is, in terms of nastiness, extremism, and fact-defiance.

Every four years, it’s routine—and usually justifiable—to bemoan the presidential campaign of the moment as a gutter-swipe endeavor, fueled more by low-minded swill than high-end discourse. But Romney’s 2012 effort has managed to crawl along and leave plenty of space beneath the low bar, as the candidate, who once claimed to be a nonpartisan, progressive fellow distant from the radicals of his party, has deployed assaults against President Barack Obama that are tinged with racism and has countenanced attack ads that push the already much-stretched envelope of political truth-bending.

At this moment, as Romney and his confreres command a national audience, they are poised to build on a foundation of untruthfulness and Obama-hatred years in the making. The New York Times, in polite fashion, noted that Romney and his posse have decided to use this week to cast a harder edge on their message. Is that a signal that Romney’s whatever-it-takes approach will now be turned up to 11?

Let’s ponder his recent fusillades. This summer, Romney accused the president of ending the work requirement for welfare. Fact-checkers in the mainstream media were unanimous: This charge was entirely false. Yet Romney did not cease. His advisers even told journalists this line of attack would bolster Romney’s courtship of white working-class voters. In polls, Romney maintains a decisive edge in this slice of the electorate, but it’s not sufficiently decisive, given Obama’s advantage with other blocs. Thus, this phony welfare attack—the black guy in the White House is going easy on those welfare-sucking parasites and you know why—was perhaps the most cynical blast of this campaign and, let’s call this one honestly, an outright attempt to exploit racial resentment.

Romney’s race-card drop was augmented by other recent remarks. He called the president “angry“—in what could be seen as a swing at the angry-black-man attack. He also cracked a birther joke—which was a reminder that he’s been playing footsie with birtherism (which is hard not to view as at least partly motivated by racism) by embracing Donald Trump and other adherents of this nuttiness. (The original GOP convention schedule had seven birthers listed as speakers.) And though Romney has meekly separated himself from explicit birtherism, he has repeatedly charged that Obama doesn’t understand the United States and its specialness and seeks to foist foreign (as in, European) values upon the land. It’s a kinder and gentler way of depicting the president as the Other—and of connecting with a political base that scorns the man in the White House as a secret-Muslim socialist whose goal is the destruction of the nation. (Newt Gingrich helped facilitate this form of Obama-bashing by calling Obama a food-stamp president and proclaiming that the key to comprehending Obama was to understand his supposedly Kenyan anti-colonialist outlook.)

When not looking to press that specific button, Romney of late has focused on another fact-free claim: Obama has cut $716 billion from Medicare. Once again, fact-checkers rushed to put out this fire, and Romney ignored them. The use of this lie was understandable. Romney was counterpunching. Once he placed Ryan on the ticket—perhaps the only bold move of his uninspiring campaign—Romney became more vulnerable to negative ads targeting his support for Ryan’s budget plan that would end the Medicare guarantee and replace it with a voucher-like system, causing seniors to pay thousands of dollars more for their health care (while well-to-do Americans would receive tax breaks beyond George W. Bush’s wildest fantasies). Romney’s empire struck back and issued a claim that was both false and absurd, for Romney and Ryan fervently contend Medicare savings must be produced and Obama did just that by reducing future spending on Medicare Advantage, a certain kind of premium Medicare plan run by private insurance firms.

This Medicare assault was another wildly cynical move—an indication that no matter what Romney and Ryan profess, they are not truly interested in a serious debate about public policy and hard choices. The only rule: Anything goes.

That’s no shocker. The GOP has become a haven of far-outness. During the health care debate in Congress, House Republican leaders held a rally at the Capitol with tea partiers who chanted, “Nazis, Nazis,” in reference to Democrats. (John Boehner and his crew did not object.) Republican leaders have hyperbolically said that Obama’s stimulus created not a single new job. Not one. Despite Obama’s success with the Osama bin Laden raid and the Libyan campaign, GOPers deride him as a hapless foreign policy amateur. They claim Obama is a foe of freedom and insist that if he wins another term he would finally be free to implement a covert radical agenda and end the United States as we know it. (See any Rick Santorum speech.)

Romney, who once upon a time based his successful political career on a claim to be a no-nonsense, get-things-done businessman, this week officially takes the reins of a party that has embraced an assortment of alternative realities. (Obama is an incompetent naïf but one possessing an intricate and sophisticated plan to fool the American public and remake the United States into a Europeanized secular-socialist state with a mad-with-power government crushing individual liberty; global warming does not exist; rape cannot cause pregnancy.) As a onetime middle-of-the-road governor who had succeeded wildly in the private sector, Romney has always had a compelling case to present in this campaign: Obama has not done enough to repair the economy; I can do better. And there are enough honest policy differences between Romney and Obama—on tax rates, government spending, foreign policy, abortion, gay rights, and more—to fuel a sharp, feisty, and fundamental debate based on a contest of ideas, not a clash of charges.

Yet Romney’s party did not want such a fight. They craved a mudfest, and Romney, a patrician quarter-billionaire, has obliged. So there’s really not much mystery in Florida. The Tampa convention will be a continuation of this cavalcade of sleaze. You dance to the tune that brought you. And not even a driving storm can wash Mitt Romney and his campaign clean.