Paul Ryan loves charts. As chairman of the House Budget Committee, the Wisconsin GOPer has cultivated a reputation as the consummate policy wonk, ready to wage ideological battle at the drop of the dime with an arsenal of tables and graphs. But Ryan’s numbers don’t always add up. And when they do, the results can be stunning. When Democrats tested arguments about his budget in focus groups, they found it difficult because voters refused to believe that a politician would actually propose, say, gutting Medicare to cut tax for the rich. The Center on Budget and Policy Priorities says it’s “the largest redistribution of income from the bottom to the top in modern U.S. history.”

Here’s a guide to Paul Ryan’s balance sheet, by the numbers.

1.) Ryan’s public image is that of a “deficit hawk,” constantly looking for inefficiencies and unnecessary programs. But that’s a recent invention. As a congressman, Ryan has played a key part in the ballooning federal deficit over the last decade. He voted for the wars in Iraq and Afghanistan, Medicare Part D, the implementation and extension of the Bush tax cuts, the 2008 stimulus, the auto bailout, and TARP: 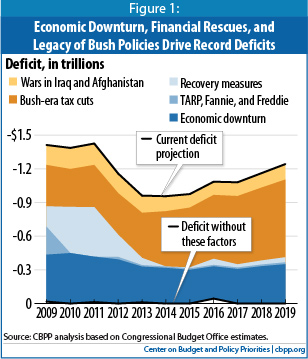 Center on Budget and Policy Priorities2.) The New Republic‘s Jonathan Cohn writes that under the 2011 Ryan budget, “[g]overnment would be so starved of resources that, by 2050, it wouldn’t have enough money for core functions like food inspections and highway maintenance.” That sounds like hyperbole, but it’s not. The Ryan budget pledges to reduce non-entitlement expenditures from 12 percent of GDP to just 3.5 percent—all while somehow increasing defense spending: 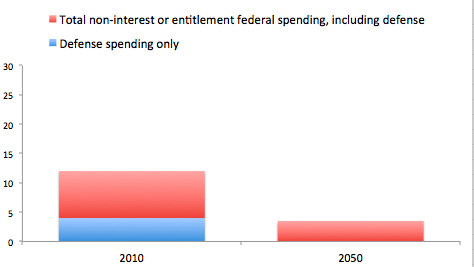 Based on Congressional Budget Office estimates3.) What specifically would get axed under the Ryan budget? He doesn’t say. That allows him to sidestep charges that, for instance, he would eviscerate funding for popular programs like Pell Grants. But the CBPP’s analysis suggests that whatever route Ryan takes, it’s a guarantee that the discretionary cuts would mostly hurt the poor: 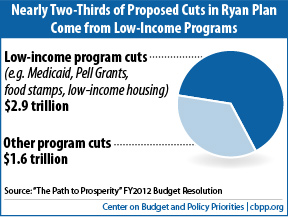 CBPP4.) As Suzy Khimm explained in MoJo last year, the Ryan budget curbs Medicaid and Children’s Health Insurance Program (CHIP) spending “not by finding efficiencies but by slashing benefits, cutting payments to providers, and reducing access to the program.” According to an Urban Institute study commissioned by the Kaiser Family Foundation, the number of people eligible for the federal health care program could be cut by more than 50 percent: 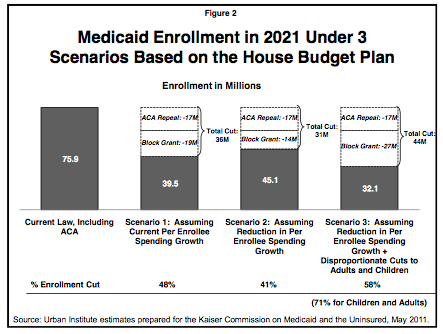 Kaiser Family FoundationHere’s what that means as a percentage of overall GDP: 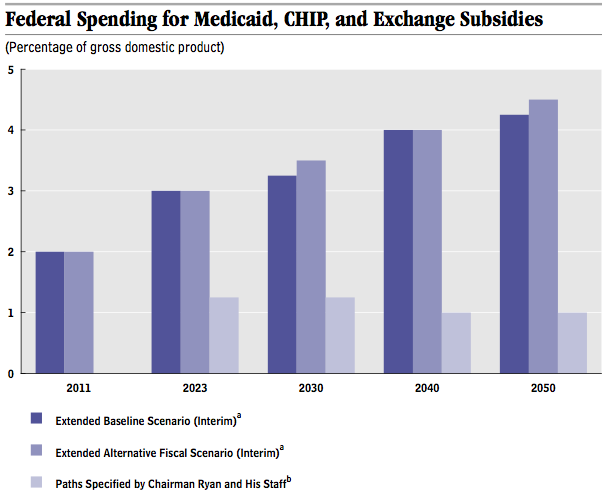 CBO5.) Political pundits have already expended gallons of ink pondering the impact of the Ryan pick in states with high numbers of senior citizens, like Florida, Iowa, and Pennsylvania. But the Ryan budget leaves today’s elderly voters mostly unscathed; it’s everyone else who gets the axe. The Congressional Budget Office calculated that under the 2011 Ryan plan, the government’s contribution to health care would not keep up with the increase in health costs and increases in insurance prices. That means seniors would be responsible for almost twice as much of the tab: 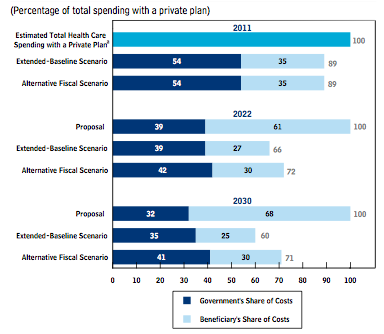 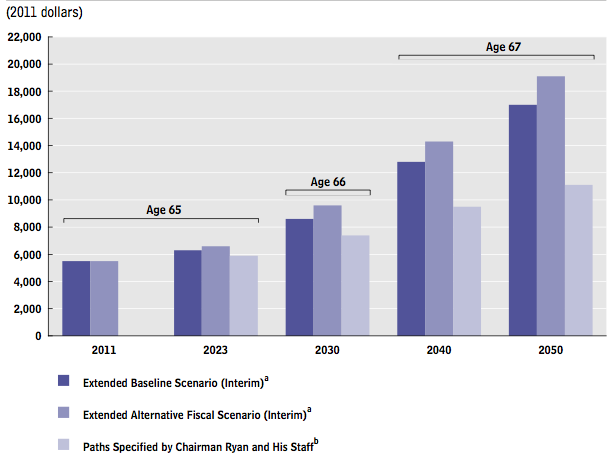 Congressional Budget Office6.) As Alec MacGillis notes, Ryan’s 2012 budget “promotes saving by eliminating taxes on interest, capital gains, and dividends,” in addition to repealing the estate tax (“death tax,” in GOP parlance). That’s on top of the proposed permanent continuation of the Bush tax cuts. Interest, capital gains, and dividends don’t mean much to low-income earners. But it’s a huge boost for the one percent—and more specifically for Mitt Romney, whose tax rate would drop to close to zero. (He still gets fresh income from book sales and speaking fees.) Here’s the breakdown on how much after-tax income would increase, percentage-wise, for each quintile, under the Ryan Budget: 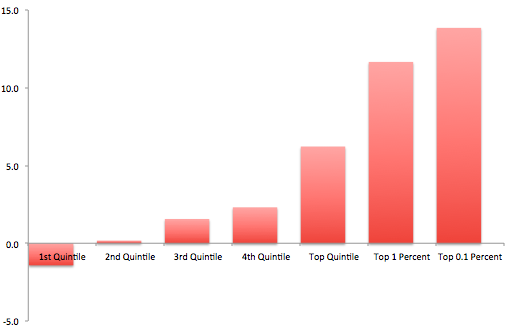 Tax Policy Center dataThe only people paying more are those who afford it least.

The Romney campaign has already signaled that its candidate intends to distance himself, at least rhetorically, from the Ryan budget. But given Romney’s previous embrace of the proposal—and his new, literal embrace of the man behind it—you can see why the Obama campaign seems to be licking its lips at the chance to run against Romney–Ryan.