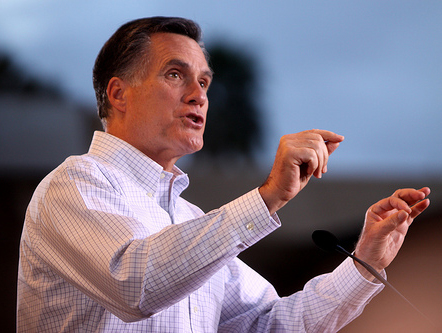 Andrea Saul is the press secretary and chief spokesperson for Gov. Mitt Romney’s presidential campaign. But before Romney hired her, Saul worked for a DC-based public affairs and lobbying firm that worked to undermine climate science on behalf of corporations like ExxonMobil, according to a detailed new report from Greenpeace’s Polluter Watch project.

While working for DCI Group, Saul worked on anti-climate-science campaigns on behalf of Exxon. That included creating the faux news site Tech Central Station, which was used to promote columns from climate deniers like Willie Soon and Pat Michaels. Saul is listed as the contact person on the archived version of the Tech Central page.

She was also listed as the point person on a press release claiming that there is “no link between increased storm activity and a massive change in global climate” that was released in 2006, several months after Hurricane Katrina. DCI Group also created a video news release downplaying the climate-storm connection, though it’s not clear which DCI client paid for that work.

In late 2006, Saul also handled press for group of 17 climate skeptics who were trying to get the American Meteorological Society to weaken its statement on climate change by adding terms like “data uncertainty issues,” “natural variability,” and “imperfect climate models.”

DCI Group also hosted a “strategic discussion on the Clean Air Act” in 2006 that featured a climate skeptics from right-wing think tanks like the Competitive Enterprise Institute and the Heartland Institute as well as a number of Exxon employees, according to a guest list that Greenpeace obtained.

As Greenpeace notes, Saul’s “role in shaping Romney’s climate and science policy is not known.” Romney has always been a bit squishy on climate change, but has only gotten more so over the course of his past two presidential runs. Given Saul’s past, it’s no surprise the Romney campaign’s most mealy-mouthed statements on climate—including “CO2 is a naturally occurring gas” and “he believes it’s occurring, and that human activity contributes to it, but he doesn’t know to what extent”—have come directly from her.