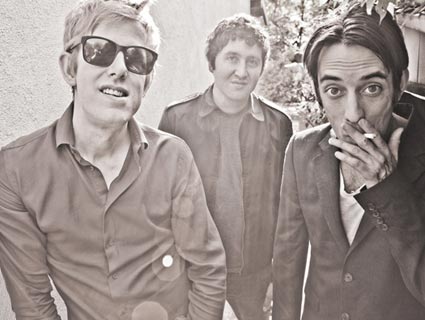 I remember the first time I saw Spoon. I was 15 years-old and standing—well, somewhere between sandwiched and flailing—in the front row at their show in my hometown. Britt Daniel, with his Texas drawl, throaty wails, and lanky rock-and-roll radiance had, in that moment, become a god. “I was making eye contact with Britt Daniel,” I boasted to my friend after the set. “Oh yeah? So was I,” she said, her face flushed and proud.

I wanted to kill her.

Part of it was, sure, being 15. But the other memorable factor, the one that stuck, was experiencing that classic front man element, the Jaggeresque confidence and swagger that few can pull off. Daniel, iconic for turning out cache after cache of howling, infectious Spoon songs since the mid-’90s, can pull it off, and does so with finesse—as does guitarist and vocalist Dan Boeckner, formerly known as one of the main songwriters behind Canada’s Wolf Parade and, more recently, the Handsome Furs. So when Daniel and Boeckner announced that they were forming a band called Divine Fits with New Bomb Turks‘ Sam Brown earlier this year, it was no surprise that the blogosphere immediately blessed them with “supergroup” status.

On the eve of the release of their debut album, A Thing Called Divine Fits, I spoke with Daniel about the band names they rejected, that one Pixies show that’s stuck with him since college, and how this lineup liberates him as a musician.

Mother Jones: Dan once said in an interview that you became a fan of his after watching the Handsome Furs’ “Dumb Animals” video. Why that video? And why’d you want to start a band with him?

Britt Daniel: For some reason it reminded me of something off of those dark Cure records—like records two, three, or four. So when I actually did meet him, I was just blown away by how friendly a guy he is. He’s real outgoing, and came right up to me, and we just got along real well.

MJ: What do you guys bond over, other than music?

MJ: Last month, one day before Divine Fits played its first official show, you guys played a surprise gig in Austin as “Hot Skull.” I gather that was on your short list of band names. What were the other contenders?

BD: I think Lace Jerks was one of them. We had a few names that we really liked. And so I made a bunch of record covers with the different band names. And this is the one that kind of just felt the best, based on that. I made maybe like, eight phony record covers, But one of them was the one we ended up using. I found the image just online somewhere, and I don’t remember where, like on some tumblr. And then I put it together in In Design, I think. 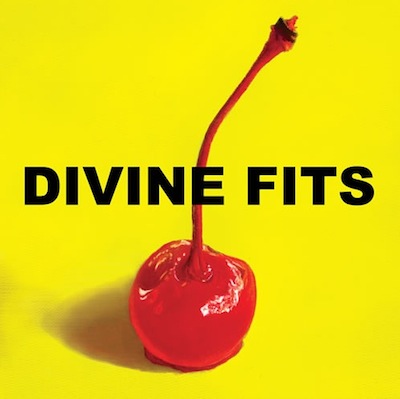 Britt Daniel/Divine FitsMJ: How good were you at giving each other feedback through that songwriting process? Has Dan ever made a suggestion that you thought was really silly? Or did you recommend things that he was skeptical of?

“I love not being in charge of writing all the songs, and being the front person—the whole thing is cool.”

BD: Yeah, I think we both made suggestions that the other person didn’t like so much. And that’s one of the greatest things I’ve felt all along about being in this group: Nobody’s afraid to say when they think an idea isn’t the greatest—and also no one gets offended when they hear that. It really makes things go a lot faster. It cuts through so much bullshit.

MJ: You’ve already played a few shows together as a band. Is there anything you’re dying to try out live?

BD: We’re dying to get more songs together. Right now we’ve only got 13 songs that we can play live, and that’s good enough for a show, but we play the exact same 13 songs every time. We want to have a little it of padding. So I guess that means we’re going to have to write some more songs and learn some more covers.

MJ: Anything you wish would never happen again live?

BD: There was when we were playing “The Salton Sea” one night—there’s a couple songs that we play live that we’re all playing to a bed, we all play on top of a prerecorded thing. That was one of them. Sam started, kicked it off—he hit the machine, he starts drumming. And I completely forgot I was supposed to start singing. And so I just thought, you know, normally in any kind of gig situation you can go talk, or figure it out, and go sing whenever you want to. But this is not that situation, so we really almost blew it. Somehow we got back on track. This was in Montreal, and I think everyone had known we’d blown it. We were all kind of looking at each other like, “Is it here? Is it here?”

“The two of us have a similar sensibility in sort of liking that creepy feeling in music. So I wouldn’t be surprised if things end up that way a lot.”

MJ: Have you felt that it hasn’t been that way for a long time?

MJ: You’re touring through August, then picking it up again in September and October. I know you’ve already hit Austin, your hometown. Where are you most excited to play next?

BD: I like pulling into a college town and it’s a Thursday afternoon or a Friday afternoon or a Saturday afternoon, and you can kind of feel the excitement in the air. Everyone’s going to go out tonight, and maybe you run into people at the sandwich shop and invite ’em to the show. And then it feels like the whole town comes out because they’re so excited that some rock band has come to their town for their show. And afterwards there’s usually a party at someone’s house.

BD: In Spoon we played at some college campus in Alabama. And first of all, some people we didn’t know took us to a dorm room, smoked us out, and then we ended up somehow going to a party that was within walking distance. So we’re walking through this beautiful campus at night, sort of lost and not knowing where we’re going, and then we ended up at this house that’s basically across the street from the university. And it was sort of all the cliché movies you see—where there’s college parties, and there was a slip n’ slide and girls were going down it with their tops off, kegs in multiple parts of the house, you know. Just, you know, debauchery.

MJ: Is there a band that came to town when you were a student that you were especially excited to see?

BD: Yeah, the Pixies, right when I started going to school. It was on the Doolittle tour. Everybody that lived in Temple, Texas, where I had grown up, and went to University of Texas, they were all there, and then all the people who didn’t, who had moved to Austin—they came down from Temple, and yeah, it was a moment. I remember a guy slam-dancing a bunch and he was really annoying to me. And then later I found out it was one of my friends from high school, in fact someone I liked a lot. I remember that one of my friends told Kim Deal—he was like, “I’ve got 20 bucks that says you’re gonna play ‘Debaser’ first,” and she said, “You lose.” This was right before the show started. I remember that Black Francis seemed like he was in a bit of a bad mood, but then before “Caribou” he started doing a little waltz in 3/4 time, and that’s when the tension lifted.

MJ: So what are you guys psyched to explore, sound-wise?

BD: Whatever vision I have is below the surface. And we specifically tried not to have a set of rules or a direction. We just said, “We’ll take it on a song-by-song basis.” Whatever it needs. But I remember us specifically saying that it’s cool that we haven’t worked with each other yet, and we’re not known for anything yet—we’re not worked into a corner. We should be able to do whatever we want. The two of us have a similar sensibility in sort of liking that creepy feeling in music. So I wouldn’t be surprised if things end up that way a lot.

MJ: Was there anything you sent each other as inspiration while you were trading track ideas over email?

BD: I sent him this Rolling Stones DVD, Ladies and Gentlemen. It’s from the Exile tour, I believe. I love bands that can collaborate, and I feel like the Rolling Stones wouldn’t be nearly as great as they are if it wasn’t for them having a real group. That’s what that band is all about. There’s an amazing lyricist, there’s the guy who has the sort of reckless bluesy side, and then there’s Mick Jagger with his pop side; there’s an amazing drummer and amazing bass player. That was a big reason why I thought to send it to him.

MJ: Back in 2010, when Dan came on stage for a cover of “Modern World,” was that the first time you played together?

BD: Yes, I believe so. We had played a show where Handsome Furs opened for us, a couple times. But that was the first time we’d been on stage together.

MJ: Did that plant the seed of an idea for a band?

BD: Maybe a little bit. We didn’t talk about it then. But what it was like for me was like, here’s this dude up on stage with us, that I feel really great about being on stage with. This song is amazing, and he’s just the real deal. I always thought he was 100 percent rock and roll.

MJ: What do you mean by that?

BD: Mm. I think you know what I mean.