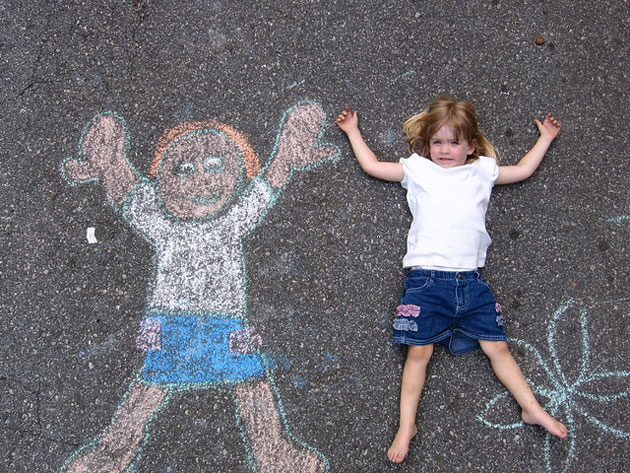 “I draws what I like and I like what I drew!” sings Bert, the affable sidewalk artist in Disney’s Mary Poppins. He doesn’t know how easy he’s got it. If Bert lived in one of a dozen American cities, his colorful chalk drawings of boats and circus animals could very well land him in jail.

Take the recent example of Susan Mortensen, 29-year-old mom in Richmond, Virginia. In March, Mortensen was arrested for allowing her four-year-old daughter to draw on rocks at a local park with sidewalk chalk. This month a judge sentenced her to 50 hours of community service helping to strip and repaint 200 boundary posts on a bridge. Mortensen told a local TV station that her daughter is now “very nervous around cops” and “very scared of chalk.”

That’s not all. One week ago in Doylestown, Pennsylvania, police cited two teenagers for decorating a street with chalk renditions of a whale and a sea turtle. The kids must now appear in court and pay a fine to be determined by a district judge. James Donnelly, Doylestown’s police chief, told a local newspaper that the chalking was “an attempt at vandalism” that could lead to the use of more permanent materials.

These are not isolated incidents. Over the past five years, at least 50 people in 17 American cities have run afoul of authorities for coloring things with chalk. The vast majority were arrested in connection with drawing designs or messages on public streets or sidewalks. Those accused of chalk vandalism range from the “Chalking 8“—who were asking for trouble when they drew anti-cop slogans on the wall of the police station in Manchester, New Hampshire—to six-year-old Natalie Shea, who received a New York City graffiti warning that carries a possible $300 fine for marring her stoop in Brooklyn’s Park Slope neighborhood with a blue chalk scribble. (A spokesperson for Crayola, the leading maker of sidewalk chalk, did not return a phone call seeking comment.)

This map includes details of chalk-related arrests in the United States since 1991—all those we could track down, in any case. (New York, SF Bay, Los Angeles, and Denver have multiple entries, so you’ll need to zoom in to see everything.) The article continues below.

The war on chalk’s most active front as of late has been Los Angeles, where police have arrested numerous chalk-wielding Occupy LA members on vandalism charges. Last month, the occupiers fought back during the city’s popular Art Walk by staging their own Chalk Walk, decorating walls and sidewalks with slogans such as “Arrest corrupt bankers, not chalkers” and “When chalking is a crime, only criminals will play hopscotch.” 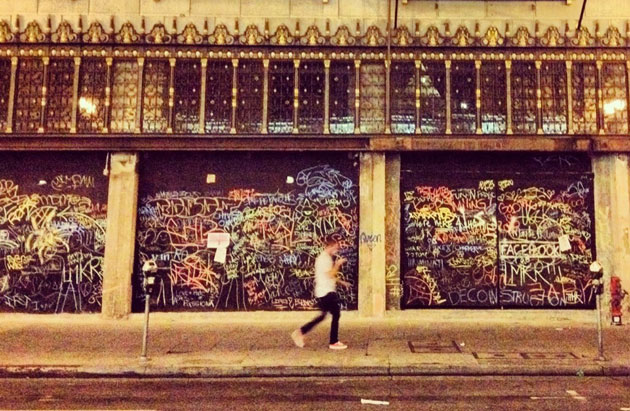 After the Chalk Walk in Los Angeles. Jason Neville/Twitter

Things took an ugly turn around 8:40 p.m. when the first chalker was arrested, and occupiers began throwing bottles at the police; some 140 riot cops moved in to make arrests. Four officers and several protesters were injured.

Two weeks later, art teacher Alexander Schaefer, best known for his oil paintings of burning banks, decided to stage a chalk protest of his own. On the sidewalk outside of a Chase branch in downtown LA, he chalked the word “Crooks” next to a rendering of the Chase logo. Watch what happens:

Schaefer’s arrest was the 15th arrest this summer on chalk-related charges in LA, although the City Attorney’s Office has pressed charges in only a couple of instances. A spokesman for the office, Frank Mateljan, pointed me to a 2000 California Court of Appeals ruling that found that vandalism by graffiti “does not require an element of permanence.” I asked if this meant that children could be arrested for making hopscotch courses. “The children in your scenario would not be committing a misdemeanor because they have no malicious intent,” Mateljan replied. “Therefore, they would not be arrested.”

Schaefer’s attorney, Tom Tosdal, argues that it’s no more reasonable to arrest political chalkers. “In California, vandalism is maliciously defacing a property,” he says, “and when you express a political or social idea, it’s not malicious.” In the event that Schaefer’s case goes to trial, Tosdal wants to introduce this scene from the musical, Mary Poppins:

A duck and a teddy bear lion stand up for freedom chalkitout.tumblr.comThe recent chalk arrests might just be a warm-up for a chalk-pocalypse at the upcoming Democratic and Republican national conventions, which in past years have been targeted by a wide range of chalk terrorists. At the 2008 Democratic convention in Denver, cops tackled and cuffed two teenage protesters who were chalking anti-abortion slogans on a sidewalk. And just before the 2004 Republican convention in New York City, Josh Kinberg, the founder of Bikes Against Bush, was hauled off to jail for riding a bike that automatically sprayed anti-Bush slogans with powdered street chalk.

In cases where chalking arrests have gone to court, however, some judges have sided with the chalkers. In 1992, Christopher Mackinney was arrested in Berkeley, Calif.,* for using chalk to write: “A police state is more expensive than a welfare state—we guarantee it!” He sued the department for false arrest, and the 9th Circuit Court of Appeals ruled that his case could move forward because no reasonable officer could have assumed that Mackinney violated the state’s vandalism law.

More recently, in Florida, Occupy Orlando protester Timothy Osmar, who spent 18 days in jail for chalking, won a free speech case against the city and received $6,000 in damages. The case ended up costing the city $190,000 in legal fees—validation, perhaps, for Mackinney’s claim that maintaining a police state can be rather expensive.