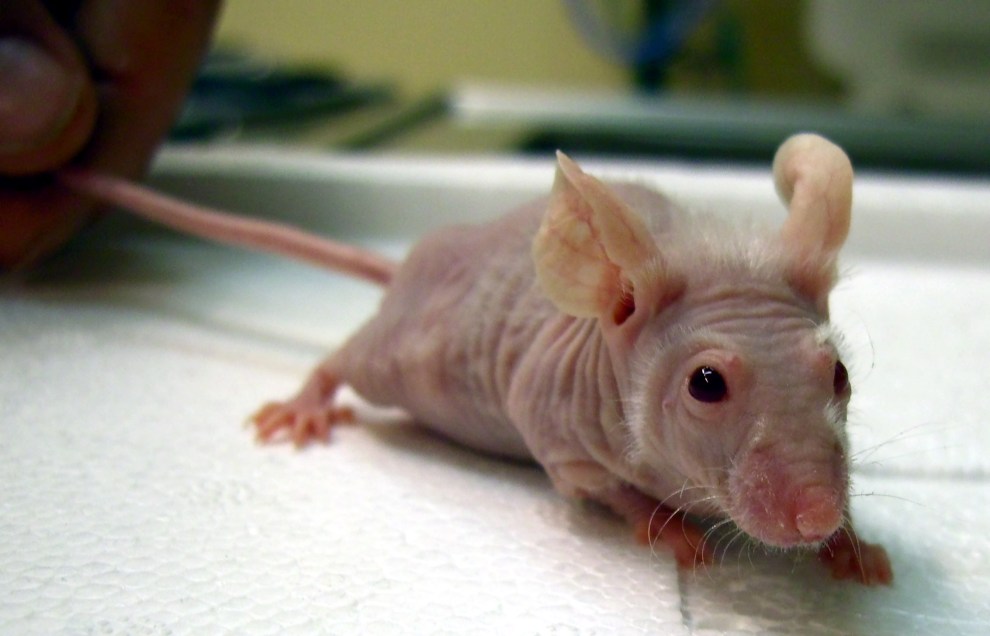 Research labs are home to mice of all sizes and shapes and genes. There’s your common and ordinary dark-coated Black-6, one of the most intensely scrutinized animals on the planet. And then there are…well, see for yourself:

Baldness is only the most obvious thing strange about this mouse. The same mutation that make it hairless also severely weakens its immune system, so that it no longer rejects grafts of foreign tissue, even from a different species. And if you’re a cancer researcher, the foreign tissue of interest is human tumors. Implanting human cancer cells under the skin of immunodeficient mice and testing candidate drugs is a standard technique in research. If the tumor shrinks, then ring-ding-ding, you’ve got a potential cancer drug. In the past couple of decades, researchers have leveled up to hairless mice with more fully defunct immune systems, having not one but three nonfunctional immune genes. 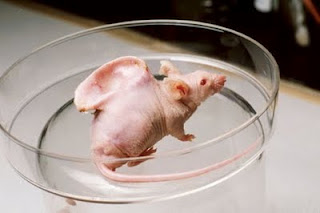 At least this cartilage on my back is better than a tumor? WikipediaLet’s begin with what this is not. This is not a human ear growing on a mouse. This is a piece of cow cartilage that just so happens—okay fine, it was on purpose—to be in the shape of a human ear.

Those of lucky enough to have two intact ears have probably never thought about how oddly shaped ear cartilage is. But for doctors, that means that trying to growing cartilage in the right shape for ear reconstruction is difficult. Dr. Charles Vacanti in 1997 created a biodegradable scaffold seeded with cow cartilage cells. Implanted in a nude mouse, the animal’s blood vessels nourished the cartilage cells until they grew to replace the simultaneously dissolving scaffold. This piece of cartilage was never implanted in a human—cow cartilage, after all, would be rejected by a normal immune system—but Dr. Vacanti used a similar technique to grow the chest plate of a 16-year-old boy born without cartilage on his left side.

Nature CommunicationsSometimes scientists use bald mice for tissue grafts, and sometimes scientists use them just because they’re bald. This little tuft of hair here could someday be the salve of balding men. Earlier this year, Japanese researchers reported successfully growing hair by implanting human or mouse stem cells into the skin of nude mice. The hair follicles even connected to nerves and muscle, so these albeit wispy-looking hairs could stand on their ends, just like when you get goose bumps.

Bonus: Bad Hair Day (Bhrd) is the real name of a mouse mutant. They look exactly how you’d expect. Arguably, not as bad the one tuft of hair. 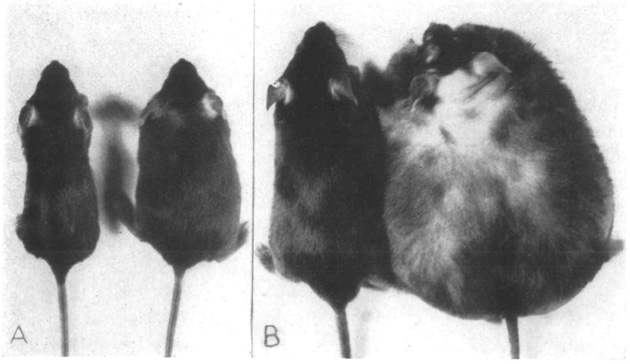 Admit it, we’re the cutest mice you’ve seen in this post. Journal of Heredity

In the summer of 1949, some very normal-looking mice were born into The Jackson Laboratory in Maine. As time passed however—21 days in photo A, 10 months in photo B—these mice showed a voracious appetite, eating and eating until they ballooned into small fur pillows with tails. With fat cells both abnormally large and numerous, the mice weighed as much as three of their lean counterparts.

These were the first ob/ob mice, so named because they have two defunct copies of the ob gene. This strain has become widely used in obesity and diabetes research, and The Jackson Laboratory is now one of the largest mouse breeding facilities in the US, providing research labs with milions of mice like this.

Real life Frankenstein—conjoining an obese mouse with a normal mouse

Figuring out how the ob gene actually worked took decades and a Frankenstein-like technique called parabiosis. Think conjoined twins, except the two “twins” aren’t related. Parabiosis requires making a shoulder-to-hip incision down the sides of two mice and delicately sewing them together. Once the wound healed, the conjoined mice share one the same blood.

In one the most famous parabiosis experiments, Douglas Coleman conjoined an obese ob/ob mouse with a normal one. Becoming attached to a normal mouse “fixed” some of the health problems in ob/ob, making it eat less, have lower blood sugar, and lose weight. This and other parabiosis experiments with diabetic mutants led Coleman to conclude that ob/ob mice lacked in their blood a “satiety factor,” or some hormone that let them know when they were hungry. That’s why sharing blood with a normal mouse helped.

In 1994, 45 years after ob/ob was first discovered, scientists finally pinpointed the exact gene that made the mice obese. Indeed, the gene made a hormone called leptin that regulates appetite and metabolism. As in mice, problems with leptin can cause obesity in humans.

A tumor for every follicle

While the leptin gene find took years and years to find in the 90s, geneticists today have sophisticated techniques that easily target single genes. Knockout mice lacking a specific gene and transgenic mice engineered to have additional genes are workhorses of the modern lab. 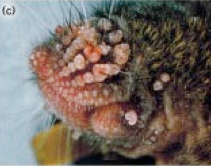 Current Biologyis one example. Aside from studying implanted tumors in nude mice, cancer researchers also work with genetic models, and overexpression of the ras gene makes mice especially prone to cancer. The prefix K5 refers to a genetic tag that means ras only gets overexpressed in the skin of this mouse. And overexpressed it is. In this barely recognizable muzzle of mouse, there’s a tumor in every follicle. About 20 percent of all tumors have mutations that make ras overactive, so it’s a key cancer gene.